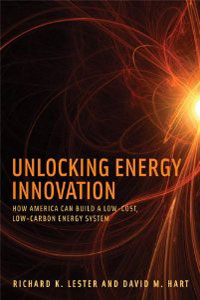 Energy innovation offers us our best chance to solve the three urgent and interrelated problems of climate change, worldwide insecurity over energy supplies, and rapidly growing energy demand. But if we are to achieve a timely transition to reliable, low-cost, low-carbon energy, the U.S. energy innovation system must be radically overhauled.

Unlocking Energy Innovation outlines an up-to-the-minute plan for remaking America's energy innovation system by tapping the country's entrepreneurial strengths and regional diversity in both the public and private spheres. The authors map three waves of energy innovation to show how we can speed up the introduction of new technologies and business models and accelerate their deployment on a massive scale.

"Business as usual" will not fill the energy innovation gap. Nor will wishful thinking--common enough today, with politicians and others talking up some technologies, talking down others, and claiming that if we price it, or if we mandate it, or if we simply say it often and inspiringly enough, the innovations will flow. Only the kind of systemic, transformative changes to our energy innovation system described in this provocative book will help us avert the most dire scenarios and achieve a sustainable and secure energy future.

Unlocking Energy Innovation is based on a three-year research project at MIT’s Industrial Performance Center, sponsored by the Doris Duke Charitable Foundation.

Articles about the book

Listen to "Innovation for an energy-hungry world": WGBH Innovation HUB interview by Kara Miller in which Lester discusses what it will take to generate the energy and fuel for a planet with a population of 7 billion that is still growing. January 27, 2012.

Listen to audio podcast of Lester discussed his new book at MIT on 14 November 2011.

"Lester and Hart have perceptively described what a vastly improved U.S. energy innovation system would look like and the significant economic and environmental benefits it could deliver. Equally important, they have laid out a thoughtful initial approach to building this system over the near and long-term." —Dan W. Reicher, Executive Director, Stanford University’s Steyer-Taylor Center for Energy Policy and Finance and former U.S. Assistant Secretary of Energy for Energy Efficiency and Renewable Energy

"Richard Lester and David Hart offer a thoughtful analysis about the special challenges of innovation in energy. Their book will generate discussion and indeed debate about the relative roles of government and markets in bringing innovation about." —Daniel Yergin, author of The Quest: Energy, Security, and the Remaking of the Modern World

Available for purchase at: