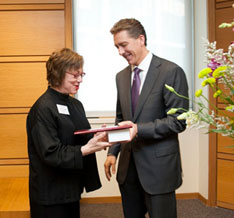 The Ellen J. Mandigo Award for Outstanding Service was presented at this year's School of Engineering Infinite Mile Awards ceremony to Anita Kafka, assistant to the department head in the Department of Nuclear Science and Engineering. Ms. Kafka previously served for 14 years as the administrative coordinator of the MIT Industrial Performance Center.

The Ellen Mandigo Award recognizes staff who have demonstrated, over an extended period of time, the qualities Ms. Mandingo valued and possessed in great abundance during her long career at MIT: intelligence, skill, hard work, and dedication to the Institute. The Award carries a cash prize of $5000.

Professor Richard Lester, the current department head of Nuclear Science and Engineering and previously director of the IPC, commented that “Anita's outstanding skills, unselfishness and generosity to her colleagues, exceptional attention to detail, can-do approach to whatever is put before her, warm and welcoming attitude towards everyone, and many years of total dedication to MIT, make her a richly deserving winner of the Ellen Mandigo Award. . . . . ‘Innovative', ‘fearless in taking on new responsibilities', and ‘totally reliable' are just a few of the ways to describe Anita's performance over the last 16 years.”  He added, “It is impossible to overstate the benefits that Anita has conferred on her colleagues simply by deploying her superb work ethic every day.”  NSE Administrative Officer Peter Brenton noted that “Anita's genuine care for those under her charge shines through.”

Photo: Anita Kafka and Dean of the School of Engineering, Ian Waitz at the 2011 Awards ceremony.