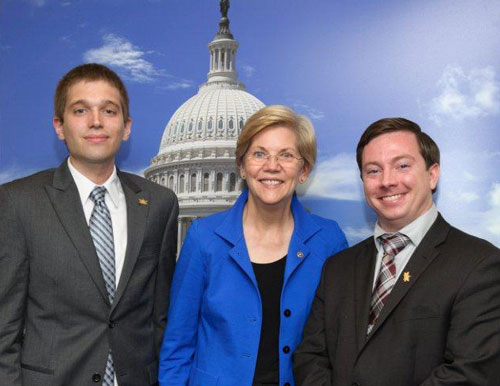 In addition to their Massachusetts visits, the MIT contingent met with numerous offices for representatives and senators in their home states (Curtis from Texas, Ellis from Pennsylvania, and Jurewicz from Illinois) and members of critical congressional committees (House Energy and Water Development, Senate Energy and Commerce, and Appropriations in each chamber). By the end of the week, Curtis, Ellis and Jurewicz had met with over 50 congressional offices.

These meetings provided the opportunity to inform Congressional staffers about nuclear energy issues and the delegation’s policy priorities and to learn about the positions and priorities of the Congressman or Senator.

NESD is a student-run organization that gathers for one week each summer in Washington, DC to advocate for sound government policy on nuclear technology development, nuclear security, and nuclear science and engineering education. NESD members are selected by the student chairs of the organization from among a talented set of undergraduate and graduate applicants from universities across the United States. MIT has been consistently well represented, with at least two delegates selected each year since 2007.