A cool advance in thermoelectric conversion 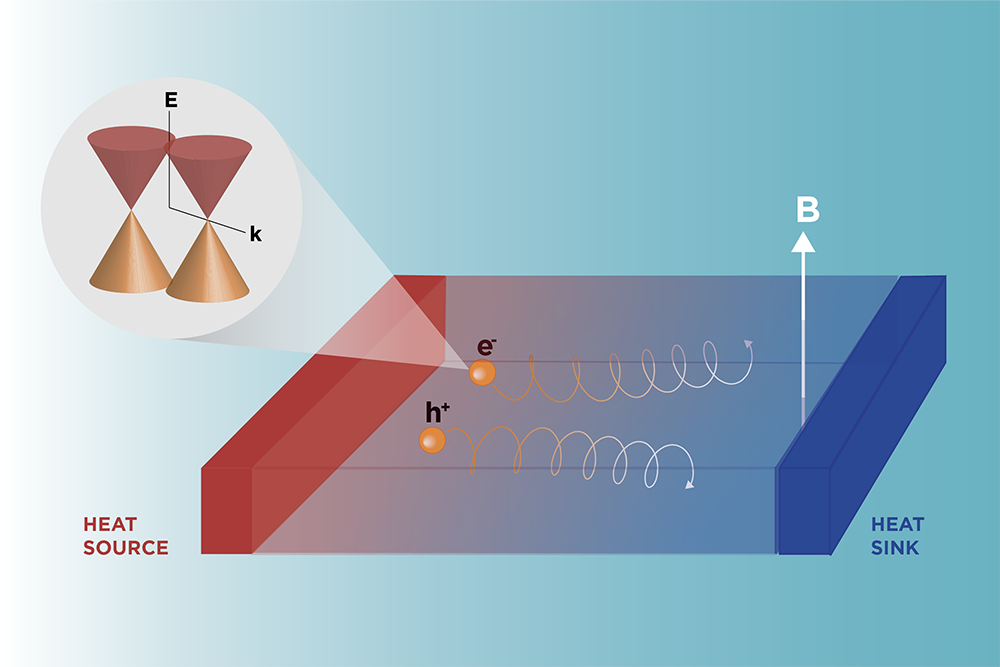 A quantum effect in ‘topological semimetals’ demonstrated by MIT researchers could allow for the utilization of an untapped energy source.

More than two-thirds of the energy used worldwide is ultimately ejected as “waste heat.” Within that reservoir of discarded energy lies a great and largely untapped opportunity, claim scientists in MIT’s Department of Nuclear Science and Engineering (NSE). As reported in a recent issue of Nature Communications, the MIT team — led by Assistant Professor Mingda Li, who heads NSE’s Quantum Matter Group — has achieved a breakthrough in thermoelectric generation, which offers a direct means of converting thermal energy, including waste heat, into electricity.

A temperature gradient, or difference, within a material such as a metal or semiconductor can, through the Seebeck effect, give rise to an electrical voltage that drives a current. “For many materials, the thermoelectric effect is too low to be useful,” explains NSE Research Scientist Fei Han. “Our goal is to find materials with conversion efficiencies high enough to make thermoelectric generation more practical.”

The efficiency of thermoelectric energy conversion is proportional to a material’s temperature, electrical conductivity, and something called the “thermopower” squared; it is inversely proportional to the thermal conductivity. Because efficiency goes up with temperature, most thermoelectric materials used today operate in the range of hundreds of degrees centigrade. “But in our lives, most of the stuff around us is at room temperature,” Han says. “That’s why we’re trying to discover new materials that work effectively at or below room temperature.”

Li’s new experimental research has been guided by theoretical papers published by Liang Fu, MIT Associate Professor of Physics, and his former postdoctoral fellow Brian Skinner and former PhD student Vladsyslav Kozii — all of whom contributed to the Nature Communications paper as well. In that earlier work, Fu and his colleagues argued that a strong magnetic field would boost the thermoelectric effect in a so-called topological Weyl semimetal.

This type of material shares characteristics of metals and semiconductors but has special features too. Topological Weyl semimetals have singular points — like the hair whorls (or cowlicks) found on top of the scalp — that confer unusual electronic properties; other properties stem from symmetries of the crystalline structure itself. The gain in thermopower predicted by Fu et al. would arise from the novel “thermoelectric quantum Hall effect.”

Li and his team prepared samples of a topological Weyl semimetal, tantalum phosphide (TaP), which were endowed with fine-tuned properties, in order to test Fu’s hypothesis. Synthesizing these TaP crystals was a difficult task, comments NSE graduate student Thanh Nguyen, “involving some trial and error because it’s such a new material [only known since 2015] that the recipes aren’t fully optimized yet. You can tinker with the relative amounts of tantalum and phosphide and adjust the oven temperature, as well as the time you ‘bake’ the ingredients, to meet the requisite level of charge carrier density. The crystal size also has to be large enough to facilitate high-precision measurements.” At the end of that process, they took the resultant TaP crystal — trimmed down to a thin strip — heated one end of it and, under the influence of a 9-tesla magnetic field, measured the electrical and thermal conductivity and the induced voltage.

The study yielded several significant, though related, results: The MIT researchers were the first to demonstrate that the thermoelectric quantum Hall effect could indeed be evoked in a Weyl semimetal. Owing to that effect, moreover, they obtained a very high value for the thermopower. In addition, their TaP crystal achieved a record high “power factor” — the product of electrical conductivity and thermopower squared — which is a crucial component of thermoelectric conversion efficiency. “This is a significant accomplishment that may well lead to new applications for topological materials,” asserts Stony Brook University physicist Qiang Li, who also leads the Advanced Energy Materials Group at Brookhaven National Laboratory.

The power factor attained by the MIT group was ten times bigger than had been observed in any other thermoelectric material, but that value was reached at 40 degrees Kelvin—a relatively frigid temperature that kept the group from breaking records in overall efficiency. The challenge now is to find a Weyl semimetal that can realize its peak power factor, and peak efficiency, closer to room temperature, Li says. “Although no such material has yet been uncovered, our latest work identifies several key properties we should be looking for.” Another goal is to develop a semimetal that can generate its own magnetic field, thanks to the introduction of magnetic elements into its crystalline structure, thereby eliminating the need for an external field.

With advent of new thermoelectric materials that can operate efficiently at or below room temperature, notes Andrejevic, “we might someday take advantage of energy sources that no one even considered before.”

Written by Steve Nadis. Image by the researchers.