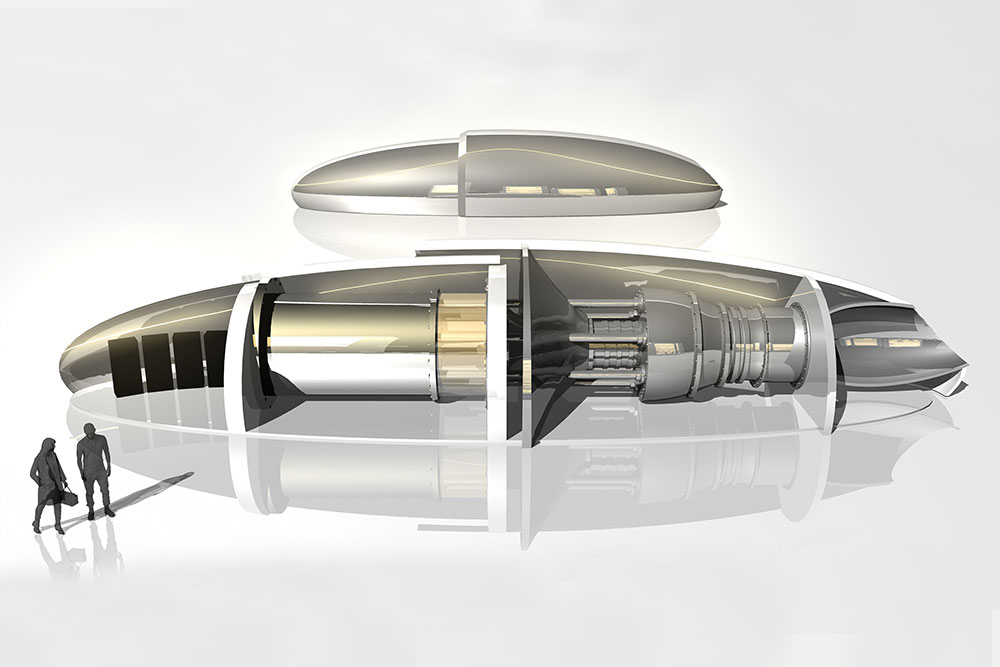 Notional rendering of a Nuclear Battery, including (from left to right) the instrumentation and control module, the reactor, shielding and heat transfer module, and the power module.

In the midst of an economic downturn and unfolding climate crisis, Jacopo Buongiorno, TEPCO Professor of Nuclear Science and Engineering (NSE), is in hot pursuit of a vision that might transform our energy infrastructure and kick start a recovery. His goal? A fleet of rugged, small-scale, portable nuclear batteries that could bypass the grid and provide onsite electricity and heat directly to end users.

“The idea is to make these batteries ubiquitous, situating them at first in factories, military bases, EV recharging stations, desalination plants, data centers, airports and seaports, and eventually in shopping malls, high rises, and communities as local energy sources,” says Buongiorno, director of the Center for Advanced Nuclear Energy Systems (CANES). This distributed network would not just make a “substantial dent in carbon emissions in sectors that are hard to electrify,” he says, but prove more resilient than the delicate and vulnerable power grid on which the nation currently depends. “The ambition is massive, because the class of problems we’re dealing with is massive,” he says.

In January, Buongiorno and a group of collaborators drawn from the U.S. Department of Energy’s national laboratories, energy and manufacturing industries, and legal and architectural firms announced the launch of a non-profit consortium, the Advanced Nuclear and Production Expert Group (ANPEG). This acronym deliberately echoes MPEG, the international standard for encoding media.

“MPEG established plug-and-play standards for digital compression and performance that big technology players used as the basis for their competing products,” says Buongiorno. “We want to apply the same idea in the development of nuclear batteries, by creating a shared set of standards, regulations, and business models that will spur battery designs for a wide range of applications.”

Buongiorno and consortium members, which at MIT also include Koroush Shirvan (NSE), Charles Forsberg (NSE) and John Parsons (MIT Sloan), are consumed with making a meaningful impact on carbon emissions in the very near term. Nuclear batteries, they believe, are ideally suited for this challenge. The micro nuclear reactors, as well as containment and energy conversion systems at the heart of the battery concept, are built on mature nuclear technologies, including old U.S. Army-tested small mobile reactors and new prototypes from NASA. “Ten years ago, these batteries would have been a pipe dream, but their building-block technologies have matured to a point where they are credible, and today they present a unique opportunity,” says Buongiorno.

Inside heavily shielded, 20-foot-long containers, nuclear batteries will function nearly autonomously, with simple coolant systems and minimal maintenance needs, says Buongiorno. They will be robust against extreme conditions while meeting the highest safety standards. This means they can complete the necessary regulatory testing and licensing in a fraction of the time typical of larger-scale nuclear reactors.

“What’s exciting is that while the traditional nuclear reactor development paradigm requires a decade or more and upwards of $10 billion, the first prototypes of these tiny reactors—with a core the size of a human being—could be fabricated in a few years, for less than 100 million dollars — a two-orders-of-magnitude reduction in the cost of development,” he says.

Off grid but ubiquitous

Confronted with the necessity of decarbonizing the economy, a new administration is leading a charge to “build back better,” aiming for a complete revamping of the U.S. energy infrastructure. “This is the right time for an energy technology that is off the grid, clean, compact and reliable,” says Buongiorno.

A nuclear battery can generate about 10 megawatts of electricity and/or heat—an energy output equivalent to that of a giant solar field or wind farm, but requiring only a fraction of the land use. A nuclear battery fleet requires no new transmission lines, or upgrades to the grid, or banks of energy storage for backup. “Nuclear batteries are geographically unconstrained, so we can decarbonize at every latitude and in every climate,” says Buongiorno.

With a flurry of green energy projects racing to meet the demand for emissions-free generation, nuclear batteries could serve large markets like heat and electricity for factories, residential complexes, hydrogen plants and freight ship propulsion. At the same time, they could also occupy such special niches as desalination and flood protection pumps on islands; containerized agricultural production and aquafarming; portable data centers; portable biopharma manufacturing; and even power for space ships and bases on the Moon and Mars.

Bringing such a radical enterprise to fruition requires realistic cost modeling. In ANPEG’s model, a nuclear battery energy provider would customize its service to the needs of the end user, guaranteeing heat and electricity at a given price over a period of time. This provider would safely swap the nuclear fuel in and out, offsite. Independent of the grid and with low operational expenses, nuclear battery electricity prices could prove competitive against prices charged by electric and heat utilities.

Buongiorno sees development of nuclear batteries as “the logical consequence” of his work over the past five years. In 2016–2018, he led The Future of Nuclear Energy in a Carbon-Constrained World study for the MIT Energy Initiative, which took a hard look at the increasingly difficult development and deployment of nuclear energy in western economies. “This got me thinking about how to change the paradigm,” he says. “Nuclear energy must shift from expensive and lengthy construction mega-projects to becoming an affordable just-in-time service. This shift can only be enabled by a radical change in scale and technology.”

A year ago, Buongiorno began reaching out to potential collaborators, fellow researchers and stakeholders from industry and government who recognized the potential of batteries with the maturing of nuclear technology. Acting as self-described “catalyst,” Buongiorno has organized a group of 30 into a formal organization on a fast track. By the end of this year, ANPEG will have identified the regulatory requirements and best business models for advancing a market-ready battery. The next phase will assemble nuclear battery makers, operators and utilities that can build, deploy and operate the fleet of batteries. After this comes the creation and testing of a nuclear battery prototype at one of the national energy laboratories.

There are what Buongiorno calls “potential showstoppers”—shifting economic tides or security issues, for instance. But there is an overwhelmingly compelling case to move forward: shifting to carbon-free energy generation—now. “With nuclear batteries we are not talking decades but half a decade, and that’s why this is a game changer,” says Buongiorno.