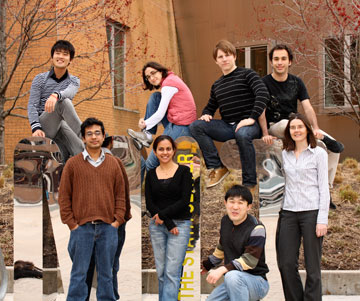 Paola Cappellaro: A Quantum Engineer
on the Frontier of Knowledge

"Quantum engineering" is not yet a household term, but its possible impact on life in the 21st Century is enormous. This emerging discipline has the potential to revolutionize computing, precision measurement, materials science, and many other fields by harnessing the complex and often-baffling properties of sub-atomic particles. Moving this technology into reality is the mission of an NSE team led by Assistant Professor Paola Cappellaro.

Unlike mechanics, metallurgy, and other ancient engineering practices, quantum engineering grows not from experience, but from theory – specifically, the 20th-century development of quantum mechanics, which seeks to explain the interaction of matter and energy on the atomic and sub-atomic scale.

Created by titans like Einstein, Schrödinger and Feynman, this body of knowledge can be deeply counterintuitive, and raises challenging questions about basic mechanisms of the universe. But Paola Cappellaro says she and her team focus on a more practical question as they develop their novel experimental equipment: how can the principles of quantum mechanics be applied to real-world challenges?

The goal is daunting – gain control over individual sub-atomic quanta, and use them as functional devices, including "qubits," or quantum representations of information. While these are somewhat analogous to the bits used in today's electronic computers, qubit-based computing could provide an exponential increase in power over traditional computing.

Achieving this will require solutions to many issues, from the basic logistics of accessing such small entities to some odd properties of the quantum world. Quantum measurements, for example, mostly give random results, and measuring a qubit changes its value.

The fundamental challenge is that we occupy a macro world of classical physics, while qubits and quanta exist in a micro world of quantum physics. When we observe or measure an object in the quantum world, we create quantum decoherence, which causes the quantum object to appear as a classical object. In the process, most of the information associated with the object is lost, and its evolution in the quantum realm is halted. Solving the decoherence problem (which can also be created by the quantum object interacting with its environment) is essential to achieving real-world quantum computing capabilities.

One line of inquiry for Cappellaro utilizes impurities in diamonds, known as nitrogen-vacancy centers. These defects provide conditions that allow room-temperature measurement and manipulation of individual electrons, including their spin. Spin, one of the properties that make up an electron's quantum state, is a central element of quantum engineering. In addition to serving as a qubit, spin is also a potential tool for measurement of extremely small magnetic fields, which could be used to monitor brain activity, investigate new materials, and develop superconductors.

Cappellaro's second line of inquiry involves the study of large quantum systems, to explore opportunities for control and noise reduction, and address issues related to decoherence.

Her group has developed control techniques for the study of fluorapatite (FAp) crystals, using a combination of nuclear magnetic resonance techniques to align and manipulate spin. FAp's properties make it a good test bed for the study of quantum information transfer and quantum simulation; research to date has produced new insights into the use of spin wires, and the team has also succeeded in devising a protocol for information transfer without the need to prepare the spin wire in a precise state. This latter accomplishment enables in principle the perfect transfer of information via spin wires, and plans for the coming year call for experimental implementation of the protocol – a result that would inspire further theoretical studies.

This interaction of theoretical and experimental work is at the heart of the embryonic field of quantum engineering. "You really have to start from a deep understanding of the theory…there are ideas in quantum mechanics that are very counterintuitive, so intuition can't carry you forward," says Cappellaro. "Then, as we try to do things that will be practical, we have to concern ourselves with experimental noise and error. Combining the two is what makes it very interesting."

Because so much of the process is being invented in real time, Cappellaro's group calls on resources across the Institute, from mathematicians to computer scientists to materials developers, as well as the MIT Nuclear Reactor Facility. "The interdisciplinary nature is one of the things I like best," she notes. "We're working on very complex many-body problems with so many inputs; you need to know at least a little bit of everything to make it work."

“The interdisciplinary nature is one of the things I like best. We're working on very complex many-body problems with so many inputs; you need to know at least a little bit of everything to make it work.”