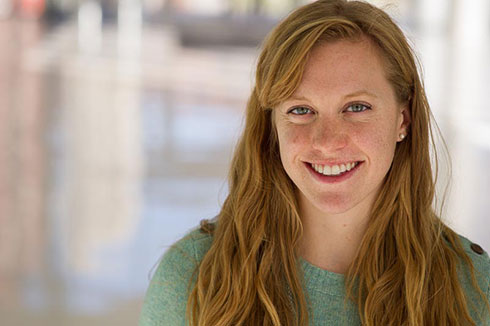 For Lindsey Anne Gilman, SM ’12, playing with bubbles is serious work. Her PhD research project, launched this past summer, concerns ways of improving heat transfer for energy production utilizing boiling water. In nuclear reactors, the formation and movement of bubbles in boiling water turns out to be a critical issue: “If instead of nice little bubbles leaving the surface of the fuel, you get a film of vapor forming, the temperature of the fuel rods can increase,” says Gilman. “When this happens, you have reached critical heat flux. The concern is that if the temperature of the fuel rods gets high enough, the structural integrity of the rods might be compromised, and even fail.”.

Gilman’s studies focus on optimizing flow conditions to achieve maximum power without compromising safety. She has just begun the first phase of her project, which entails building a software model that describes precisely what is taking place inside reactors as water heats up and approaches the boiling point. “We want to predict critical heat flux better, so we can stay away from it,” says Gilman. “My research looks at the physical phenomena, such as the surface condition of the rods, and the velocity and temperature of the water flowing across the surface, that might drive heat transfer.”

Gilman arrived at this computation-centered project, and even her research topic, in a roundabout way. As a chemistry major at Valparaiso University, Indiana, she attended a lecture on nuclear isotopes and was instantly mesmerized. “At first I was kind of afraid to tell anybody about my interest in nuclear science, because nobody I knew ever discussed the field, and I was worried they’d think I was strange,” recalls Gilman. After junior year, she found her way to a Department of Energy summer school in nuclear and radiochemistry, which exposed her to different subjects in nuclear science. Says Gilman, “The thing that really got my interest was the possibility of transmuting nuclear waste,” to reduce radioactive stockpiles.

She returned to Valparaiso and immediately signed up for courses in nuclear physics and quantum mechanics, determined to pursue nuclear science as a graduate student. After some hesitation, she applied to MIT. “I was afraid I wouldn’t fit in, given my chemistry background,” she says. After a campus visit, though, she says, “I realized I loved the department” — particularly after she discovered she shared a passion for running with emeritus professor Sidney Yip.

Although Gilman was intent on taking up nuclear waste transmutation for her master’s at MIT, she soon realized that “most of the research involved computation work, and I had never used any codes before.” She remedied this situation the following summer, with a computational physics workshop at Los Alamos. A project there, modeling how shockwaves propagate through solids, became the basis for her master’s research. Then, with her newly acquired computational skills, she decided to focus on thermal hydraulics and the design of energy production facilities.

Recently, Gilman has been investigating how to characterize the boiling process: “I’m excited about receiving data and actually seeing the bubbles and how they move.” The best part, she says, “is getting a chance to come up with my own ideas and explore them. It’s thrilling and motivating.” Over time, she hopes to test and refine predictions for producing optimal boiling conditions. The ideal end result would be a flow boiling model that “saves money and time” in the production of energy with no compromise around safety.

This is the kind of project Gilman hoped for when she first decided on nuclear science, something that “could make an impact on how people live in the immediate future.” She has not given up on her first dream, though. “I’d love to be able to come up with a way of getting rid of or storing nuclear waste so we can have cleaner nuclear energy,” she says. Whether she ends up in a national lab, academia or industry, Gilman has decided “to be involved in something that works to make people’s lives better.”

“I’d love to be able to come up with a way of getting rid of or storing nuclear waste so we can have cleaner nuclear energy.”