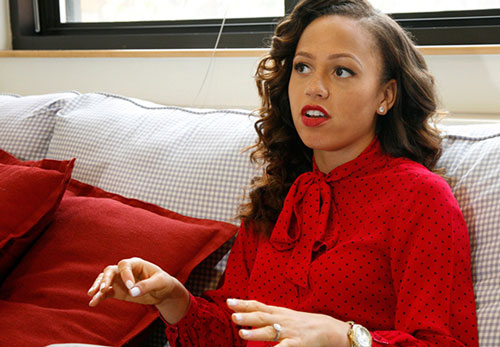 When she was accepted into the undergraduate business program at Florida A&M University (FAMU), Mareena Robinson thought she had her future all figured out: She would go to law school and become an attorney, like her father, or else a businesswoman.

But when she and her father arrived on campus at the beginning of freshman year, he made an offer the self-described “obedient daughter” couldn’t refuse: to pay a visit to the physics department, where he had a distant connection to a friend-of-a-friend.

“I said, ‘OK, I’ll just check it out,’” Robinson says. “I had no intention of going into physics. But when I got up there they treated me like a football player.”

She was surprised — after all, the department didn’t know anything about her, and had no idea whether she could cut it as a physics major. “They were so excited about anybody who was even willing to talk about the possibility of doing science because it is a select few people who have the audacity to try something like that,” she says.

Her father was sold on the program, telling her: “Mareena, I don’t know anything about this physics stuff. I can’t do one equation. But I feel like this is the wave of the future and I just need you to try it. And if you hate it or you can’t do it, you can be a theater major for all I care. But just give it a shot.”

Now a fourth-year PhD student in nuclear science and engineering at MIT, Robinson researches warhead confirmation, a crucial technological hurdle to international disarmament. Currently, most nuclear arms-control agreements, such as the 2010 New START treaty between Russia and the United States, focus on decreasing the number of deployed nuclear weapons: weapons that are physically mounted on missile launchers. The problem with such treaties is that they don’t address the actual decommissioning of the weapons.

The primary issue is one of verification: If the United States claims to have dismantled a weapon, how can it prove this to Russia without giving Russian inspectors access to a weapon that might reveal key technological secrets? Or, as Robinson asks, “How do we verify that a country is indeed complying to a future dismantlement regime?”

Robinson’s research aims to solve this problem by developing a passive detection system that could be used to detect the presence of nuclear warheads via their radioactive signatures. If successful, such work could significantly influence policy: It could enable nuclear treaties that actually decrease the total number of warheads, not just those that are mounted on launchers. Robinson was recognized in 2011 with the National Nuclear Security Administration’s prestigious Stewardship Science Graduate Fellowship, which funds her graduate work.

Robinson’s academic success is as much a product of humility, hard work, and family support as it is of genius.

Robinson and her two sisters were raised by their father; her parents divorced when she was 4. “He was not one for the pity party,” she says. “‘You fall off your bike? Get back up.’ So that’s kind of been my philosophy in life. I can change a mean tire. I can mow a lawn. I can lift a box. I don’t need help carrying groceries. I can actually use a jackhammer, too.”

Education had always been emphasized in Robinson’s family: Her grandmother alone had four uncles from South Carolina who received their PhDs in the 1930s. Robinson draws on those experiences for inspiration. “I’ve thought to myself, ‘I’m doing this in 2014. It’s nothing compared to what they were doing,’” she says. “They couldn’t drink at the water fountain, but they were getting their PhDs.”

Still, if it weren’t for her family’s support, Robinson might not have taken the same path. During her freshman year in high school, she was accepted into the Maritime and Science Technology (MAST) Academy, a top-ranked college-preparatory magnet school in Miami. Yet despite the opportunity, she didn’t want to attend.

“At my home institution I was running track, I had a boyfriend, I was loving it,” she says. “So I put up a very strong resistance.” Robinson recalls that her grandmother literally got down on her knees, begging her, “Please, baby, just go.”

“You can’t say no to your grandma,” Robinson says. “So there I was going to MAST Academy,” leaving the house at 5 a.m. and catching two buses and a train just to get to class.

In the undergraduate physics program at FAMU, Robinson worked hard and received good grades, but at times was still afflicted by academic self-doubt. Graduate school at MIT wasn’t even on her radar. “I was under the impression that if you didn’t dream about it when you were 5, if it wasn’t in your DNA, maybe it wasn’t for you,” she says. “But no! You can learn. You don’t know what’s in you until you try.”

Everything changed during the summer after her sophomore year. At the urging of one of her peers, Robinson applied for a summer research internship at MIT. “You don’t know me,” she told him at the time. “You haven’t seen my grades. I don’t know if I’m MIT-worthy.”

Then she was accepted. “You could have thought I got into the grad program, I was so excited. My whole family was so excited,” she says.

That summer brought a sort of academic revelation. “I came here, I competed, I worked, I was put under the fire, nobody told me, ‘Oh, you’re not cut out for this,’” Robinson says. “When I left here I had a confidence that nobody could dispute.”

Now that she’s at the Institute, Robinson works voraciously to provide others the same communal support from which she’s benefitted. She is co-president of the Academy of Courageous Minority Engineers, a group that serves, in her words, “to provide a community and a safe space to voice goals, grievances, and just feel supported.” The group holds weekly “accountability meetings” that are “just like seeing your family,” Robinson says. “Everyone gets together and you get to check up on people.”

She also works with an organization called Grad Catalyst that steers underrepresented minorities into science, technology, engineering, and mathematics (STEM) fields. Members of Grad Catalyst visit other institutions to hold seminars on graduate school — from what internships to apply for to how to manage relations with a PhD advisor. “There are all these little nuance things that people may not tell you, but if somebody did tell you, you’re automatically at an advantage,” Robinson says.

Indeed, Robinson’s devotion to community-building comes from the belief that her own success is a product of the support that she’s received. “I can’t wait for the day to graduate and just walk across the stage,” she says. “That’s going to be huge, because I’m going to be walking with everybody with me. My great-grandmother. My grandmother. My grandfather. My father, who had no idea about a physics equation. So that’s really powerful.”

“I was under the impression that if you didn’t dream about it when you were 5, if it wasn’t in your DNA, maybe it wasn’t for you,” she says. “But no! You can learn. You don’t know what’s in you until you try.”