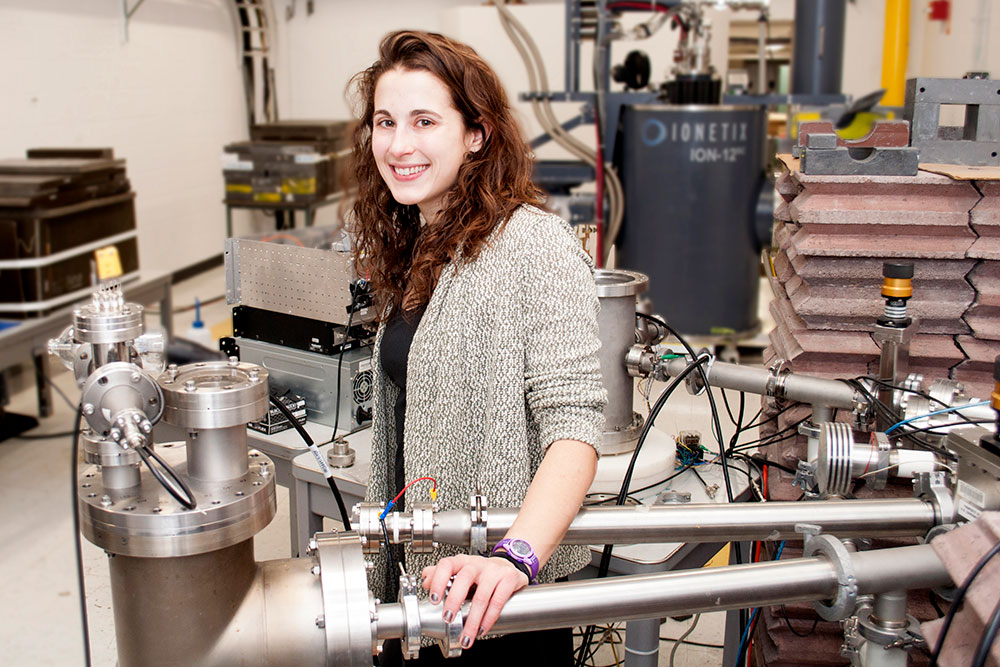 Graduate student Leigh Ann Kesler is pursuing two great interests: rock climbing and fusion science. One day she finds herself scrambling up bare rock face to view grand vistas of mountains and valleys carved by glaciers, the next in the laboratory, focusing on minute changes in the depth of materials being eroded by fusion forces.

Kesler, who studies at MIT’s Plasma Science and Fusion Center (PSFC), dates her interest in fusion from an 11th-grade persuasive writing assignment. Inspired in part by her father’s interest in the potential of nuclear energy, she decided to investigate fusion. Although the library in her Fisher, Illinois high school had only one book on the topic, written in the 1970s, its description of a magnetic fusion device called a tokamak was compelling enough to hook her.

As an undergrad at the University of Illinois, Kesler studied Nuclear, Plasma, and Radiological engineering, learning the basics about how plasmas affect materials from mentor Prof. David Ruzic. Working in his laboratory on projects related to semiconductor manufacturing as well as fusion, she gained a reputation for expertise with certain plasma diagnostics. Graduate students several years her senior began to seek her help with their projects.

“I don’t know if I was an expert,” she laughs, “but I had several advantages. I had small hands. I could reach inside of the bottom of the chamber [of the experiment]. I’d been there long enough that they knew I wasn’t going to break things.”

Now at MIT she is continuing her interest in materials science and fusion research under the guidance of Nuclear Science and Engineering Department Head, Prof. Dennis Whyte, Director of the PSFC, and Prof. Zach Hartwig. As in Illinois, she works in a lab that utilizes small-scale plasma devices for ex situ observation of plasma surface interactions.

Her main focus is erosion of materials inside fusion devices, in which strong magnetic fields keep the hot plasma fuel confined and away from the walls of the vacuum chamber where fusion reactions occur. But the plasma can still affect the walls, resulting in surface erosion and other changes.

“It’s very difficult to determine exactly how a particular kind of plasma discharge affects the interior material of the machine. We can’t be sure of the amount of erosion occurring at any particular moment,” Kesler says. Erosion affects not only the wall materials, but also the plasma itself, which can become contaminated by the eroded materials. “If you are eroding or even melting the surfaces you will eventually destroy the divertor, which is designed to remove impurities from the plasma.”

She works mainly on a 2 MV electrostatic accelerator called DANTE in the Vault Laboratory for Nuclear Science, part of the Center for Science and Technology with Accelerators and Radiation (CSTAR), a shielded, underground facility that allows her to work with a deuterium ion beam. She also uses the Cambridge Laboratory for Accelerator Surface Science (CLASS), which provides her the versatility of using two ion sources.

Kesler is searching for a way to measure on a shot-by-shot basis what changes are happening on the interior surface of the tokamak, to gain a better understanding of how different plasma conditions affect surfaces. To this end, she will use the accelerator to create “depth markers,” which will help measure changes in the metallic surfaces. She is working with tungsten, a metal that will likely be used for the divertors of future tokamaks.

Kesler is still fine-tuning what that reference point will be, what material to use, how to create the depth marker, and how to use the accelerators to see how the plasma has affected the surface. Her technique should be applicable to any material, and will be relevant to tokamaks around the world, allowing researchers to diagnose the effect of each plasma shot as it happens.

Now at the beginning of her sixth year, Kesler is still researching and writing, but starting to consider her options after graduation. “An international postdoctoral position in materials development would be great. But I’m not so much interested in where I go as in doing interesting work,” she observes. Ideally that work will be situated not far from a mountain. As Kesler observes, “There are always more rocks to climb.”