Myles Stapelberg: From videogames to startups 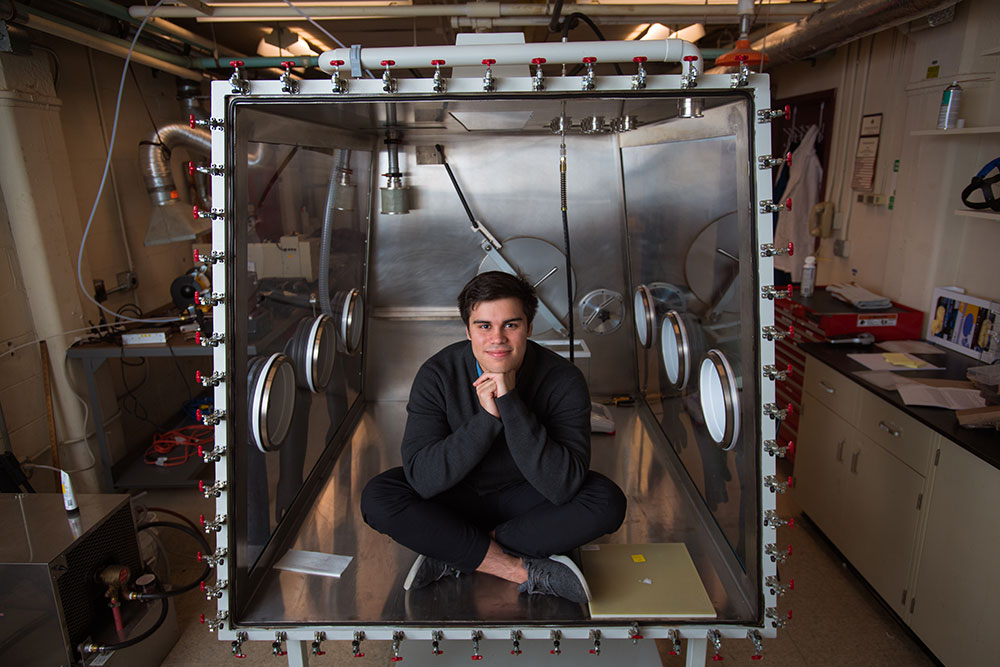 Building fusion tokamaks for the purpose of power generation rather than purely for research will require specialized materials. Myles Stapelberg ’21, a junior double majoring in nuclear science and engineering and materials science and engineering, wants to help make sure that the best materials for the job exist when they are needed. Stapelberg is using his UROP and classes to learn as much about fusion power and plasma science as he can. We spoke with Stapelberg how he got started in fusion science and materials, and his hopes for a future supporting the industry:

When did you first decide that working toward viable fusion power was a life goal?

“It actually all started with a videogame back when I was around 12 years old. You can build fusion power plants in the game and it made me wonder: would the design in the game translate into real life? I’ve always been interested in how things are made and what they are made of. Trains, computers, cars; I wanted to know the materials and the structure. I started reading science blogs and watching documentaries and the basic materials seemed the same as the ones used in the game. That’s what first sparked my interest in real life fusion.

“As I went through high school, my interests shifted to Business, Chinese, and water polo. But in 2016 I read about MIT’s Alcator C-Mod fusion “experiment” in a science magazine while I was applying to colleges, and the interest in fusion was back. I think those working to make fusion a viable energy source face some of the most interesting materials problems and challenges. It feels like this great untested problem to take on.”

Can you describe the research and coursework you are currently taking part in?

“When I first started at MIT, I got involved in an undergrad research project making nanotube fibers. After a while though, I wanted a change. I was hoping to work with something more applied to specific real world problems. I asked my academic advisor, Professor Mike Short about it and within five minutes he had me speaking with Professor Ju Li about a research project developing radiation-resistant alloys for fission, fusion, and space applications. Professors Li and Short are now my research advisors.

“Last year I was working on that project for 10 to 20 hours a week. The particles produced by fusion plasma is tough on the materials containing the reaction. So we’ve been researching ways to make materials that will stand up to the harsh environment inside a fusion plant. For example, aluminum alloys won’t become embrittled by neutrons, but would melt long before reaching the temperatures inside a tokamak. I’ve been trying to translate the radiation resistance of aluminum alloys to more useful alloys that won’t melt. I spent the majority of my time making samples that we sent to INL, ORNL, and Korea for mechanical testing before and after irradiation.

“Right now though, I’m focusing fully on my coursework. I’m currently taking classes in fusion energy, structural material, coatings, thermal fluids, math, improving the cycle efficiency of fusion plants, and a commercialization class. I want to better understand how the fusion systems and mechanisms work so that I can understand how to support the budding industry with the best materials.”

What are the challenges involved in finding materials that will work in and around a tokamak?

“Inside a tokamak we have intense high energy particles, competing mechanical forces, corrosion, and a high thermal flux. Neutrons from the plasma bombard the inside faces of the materials that are containing it. The magnetic field and pressure surrounding the plasma exerts strong forces on the structure of the reactor that can push and pull apart weaker metals.

“As for corrosion, molten salt is often used to slow down the energetic neutrons produced by the fusion reaction to breed more tritium fuel and to capture the heat for energy. But molten salt can be highly corrosive to the materials around it. Lastly, between the superheated plasma and the supercooling systems, the materials used have to be able to withstand large changes in temperature. We’ve been working with different alloys and coatings to make materials that satisfy all these conditions, including some nanocomposites in powder form.”

What has been the most difficult aspect of your work in research so far?

“I think one of the harder things has been really understanding what’s going on with the material. We’ve observed the macroscopic properties, but what’s happening on the atomic level? And why? The better we understand how and why materials behave the way they do at that level, the better we can make them perform in a tokamak environment.

“But honestly I’d say the hardest thing has been finding and allocating time to actually do all the research! Scheduling time to effectively fine tune and set up the equipment to make what we need is hard enough before we get to actually researching, making, and testing the materials.”

What are your plans for the future?

“My plan is to graduate in 2021 and then get my Master's in Nuclear. I want to use everything I’m learning to start a company that makes and uses specialized materials for fusion tokamaks, airplanes, electrical coatings, you name it. I’d like to be able to eventually support the new industry being created by research like the SPARC project.

“Right now our lab can produce 1kg a day of specialized material for testing. I want to scale that up to the level of a major commercial and research provider. I plan on using the time I have between now and when fusion energy really starts to become an industry of its own to learn and prepare for this goal as much as I can.”