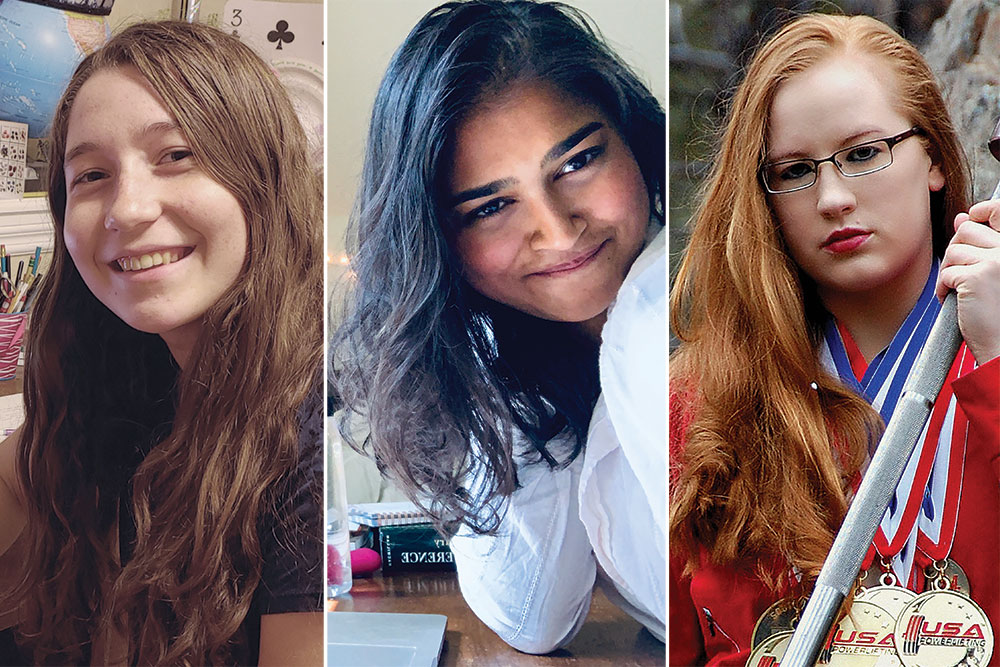 When the pandemic drove MIT students from Cambridge in March, few suspected this disruption would prove beneficial. Yet for some undergraduate researchers working with the Nuclear Science and Engineering (NSE) Department, exile from campus spurred deeper exploration of known territory, and rewarding forays into less familiar disciplines.

“I learned so much biology this summer,” says NSE major Natalie Montoya, whose senior thesis involves nuclear security and policy. When the pandemic scuttled her internship at the Lawrence Livermore National Laboratory, Montoya changed course, working instead with her NSE advisor R. Scott Kemp on projects aimed at improving Covid-19 diagnostics and testing.

Galvanized by these assignments, Montoya will split her remaining time at MIT between thesis research and Covid work: “Everyone wants things to get back to normal, and I think what I’m doing on Covid needs to happen right now.”

“It was really, really cool when Amelia said, ‘This is your project,’” recalls Wickert. Her research focused on improving data used to model neutron collisions in reactors. “Not many people are looking at this area, and it was great to know there’s this little corner of nuclear physics where I did something that no one else had done before.”

A biology and chemistry major drawn to cancer biology and a medical career, Mriganka Mandal had been working on an immunotherapy study at the Whitehead institute when MIT shut down its labs. In search of an alternative UROP, Mandal recalled her positive experience in the spring with the remote version of 22.011 Nuclear Engineering: Science, Systems and Society.

“Given how much I liked this class, I thought it would be great to develop practical experience in the nuclear field,” she says. Mandal’s queries landed her a project with NSE principal research scientist Charles W. Forsberg exploring a heat storage mechanism for use with renewable energy generation. “I didn’t have a background in thermodynamics beyond high school physics, but I found the work really appealing,” she says. “In quarantine it was difficult to remain motivated so I was very happy to engage and get stuff done as a remote researcher.”

During a Zoom-based NSE undergraduate research festival on August 29th, these students presented the results of their pandemic-bound summer work. In their “lightning” talks and subsequent interviews, they described the challenges and satisfactions of their endeavors. Professor Matteo Bucci, the NSE UROP Coordinator remarked that " the students’ research progress this past summer was impressive, and I am looking forward to what the fall and spring terms will bring, and to the next UROP research festival.”

In 6th grade, sophomore Charlotte Wickert decided on physics for her career after reading a novel about parallel universes. Then as a high school junior dreaming of a fossil-free future, she realized that studying nuclear fission and fusion energy “could be a perfect way to combine all my interests.”

Soon after she arrived at MIT (as an Air Force ROTC cadet), she signed up for a UROP in nuclear physics at an activities fair. Although she had not yet taken an NSE class, she thought research might be a perfect introduction to the field.

Wickert’s UROP, which began in freshman year and expanded during summer 2020, focused on the behavior of thermal neutrons, subatomic particles crucial to the fission process in reactors.

“These slow-moving neutrons are more likely to cause fission, which is good, but we need to know where they’re going to avoid run-away reactions,” says Wickert.  Her job involved gathering data and writing code characterizing the scattering of these neutrons as they interact with different materials in the reactor core. The data on slow-moving neutron scattering is out of date or incomplete, so the information Wickert incorporates in her coding may prove integral to new, detailed simulations undergirding the design and safe operation of nuclear systems.

“Sometimes it’s hard to remember that what I’m doing has physical significance, that it’s not just numbers on the screen,” she says. “But when I step back and think about the neutrons, I realize I’m changing interactions of particles, changing the physics of the situation.”

In the fall, from an Ann Arbor Airbnb rental shared with MIT classmates, Wickert plans to take her first (remote) NSE course, declare NSE as a second major with physics, and continue on this project “as a way of enriching sophomore year,” she says.

It required some adjusting for Mriganka Mandal to take full advantage of her UROP analyzing largescale systems for capturing heat that can be converted on demand to electricity. “Open-ended research was a first for me,” she says. “With lab and bench work, it’s very clear cut: you’re looking for a specific protein, or how something interacts with a cell.” Nevertheless, says Mandal, she found herself intrigued.

“Energy storage is a critical problem as we try to move to a low-carbon economy; renewables can’t always handle peak electricity demand,” she says. Her particular research emphasis involved evaluating a heat storage system that uses crushed rock and molten nitrate salt in an insulated tank one kilometer long, 60 meters wide, and 20 meter tall—about two-thirds of the way from MIT to Harvard.

“I was looking at the physical compatibility of different salts and rocks, and the density and heat capacity requirements,” she says. “For instance, there were problems when rocks contained iron, because salts acted as electrolytes, oxidizing the iron and making things physically unstable.” Mandal found the physics and chemistry quite fascinating: “I got to pull together my knowledge from different disciplines,” she says.

There were unanticipated payoffs such as online conferences with other researchers working on heat storage. “It was important to see people treat this problem as a pressing concern as we move away from fossil fuels,” she says.

After she returns to MIT from Charlottesville, VA for fall semester, Mandal plans to extend her UROP, mathematically modeling her hypothetical heat storage system. At the same time, she will be taking more nuclear science classes to explore nuclear applications in medicine: “I’m very excited about the possibility of engineering nuclear therapies for disease therapeutics.”

From nuclear security to Covid

Natalie Montoya’s transition to remote student life meant placing her extracurricular career as a nationally ranked bench presser on hold, and figuring out a whole new path to graduating early (she’s a junior who is effectively a senior). So her shift during the summer from security studies to Covid-19 related research didn’t throw her too much. In fact, she found it refreshing to bring analytical and computational skills honed on nuclear security data to bear on a pressing public health problem.

Under the direction of Kemp, she developed a method for evaluating Covid-19 symptoms that could help with preliminary triaging where healthcare systems are constrained. Her hometown of Rapid City, South Dakota, a stone’s throw from Mt. Rushmore, could benefit. “In a lot of places, testing is in short supply, and we wondered if we could create a self-check that would help people say right off the bat, Covid, or Not Covid,” she says.

Using Bayesian analysis on 14 symptoms found in Covid and more common illnesses like colds, Montoya found that “it’s not how many symptoms, but which ones” that point decisively toward this year’s coronavirus. Acute symptoms such as loss of taste and smell are exceedingly rare in most common infections and suggest Covid, but runny noses and sore muscles are poor indicators.  She aims to host this simple program on an open website.

“I’m getting near wizard level in Excel and its weird functions, and I’ve learned how to hunt up data that doesn’t want to be found,” she says. “And I can even explain the difference between incidence and prevalence,” she says. Communicating research clearly counts, whatever the research field.

Montoya is already putting her new-found skills to use as she gears up for the next phase of her Covid-19 research this fall. In addition to creating a wider-ranging symptom assessment tool, she is working on analyzing the effectiveness of a promising new rapid Covid-19 test. “Tests in most of the country take a week, which means the possibility of people with no symptoms superspreading the virus,” she says. “We need to get the pandemic curve down faster, and with this research, I see a chance to make a real difference—even if I haven’t gone through medical school.”

Written by Leda Zimmerman. Photo by courtesy of students.