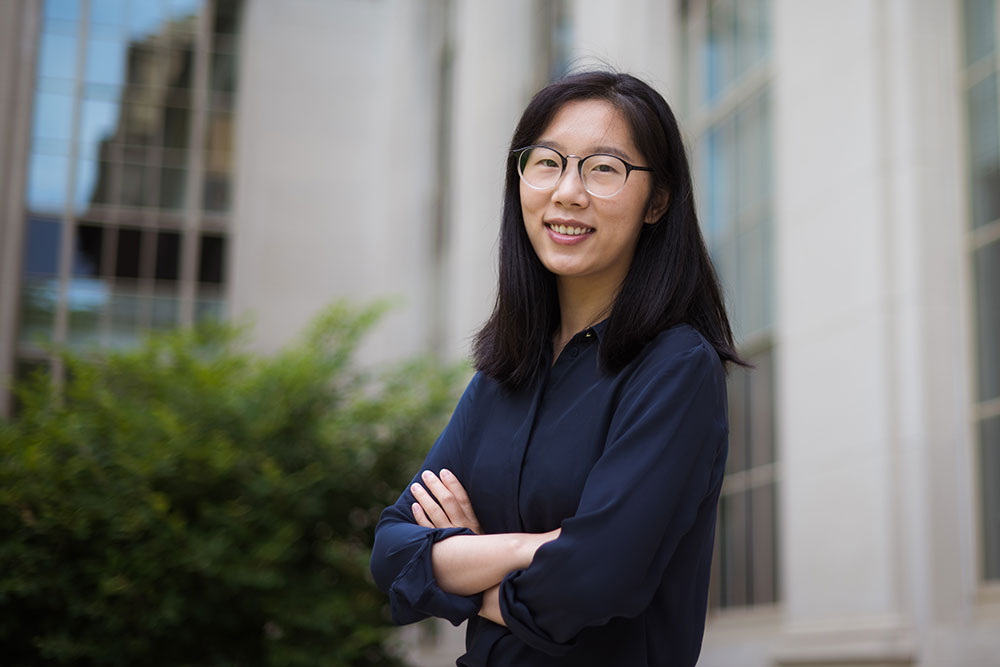 Growing up in China, Zhang enjoyed watching her father repair things around the house. He couldn’t fulfil his dream of becoming an engineer, instead joining the police force, but Zhang did have that opportunity and studied mechanical engineering at Three Gorges University. Being one of four girls among about 50 boys in the major didn’t discourage her. “My father always told me girls can do anything,” she says. She graduated at the top of her class.

In college, she and a team of classmates won a national engineering competition. They designed and built a model of a carousel powered by solar, hydroelectric, and pedal power. One judge asked how long the system could operate safely. “I didn’t have a perfect answer,” she recalls. She realized that engineering means designing products that not only function but are resilient. So for her master’s degree, at Beihang University, she turned to industrial engineering and analyzed the reliability of critical infrastructure, in particular traffic networks.

“Among all the critical infrastructures, nuclear power plants are quite special,” Zhang says. “Although one can provide very enormous carbon-free energy, once it fails, it can cause catastrophic results.” So she decided to switch fields again and study nuclear engineering. At the time she had no nuclear background, and hadn’t studied in the US, but “I tried to step out of my comfort zone,” she says. “I just applied and MIT welcomed me.” Her supervisor, Matteo Bucci, and her classmates explained the basics of fission reactions as she adjusted to the new material, language, and environment. She doubted herself — “my friend told me, ‘I saw clouds above your head’” — but she passed her first-year courses and published her first paper soon afterward.

Much of the work in Bucci’s lab deals with what’s called the boiling crisis. In many applications, such as nuclear plants and powerful computers, water cools things. When a hot surface boils water, bubbles cling to the surface before rising, but if too many form, they merge into a layer of vapor the insulates the surface. The heat has nowhere to go—a boiling crisis.

Bucci invited Zhang into his lab in part because she saw a connection between traffic and heat transfer. The data plots of both phenomena look surprisingly similar. “The mathematical tools she had developed for the study of traffic jams were a completely different way of looking into our problem” Bucci says, “by using something which is intuitively not connected.”

One can view bubbles as cars. The more there are, the more they interfere with each other. People studying boiling had focused on the physics of individual bubbles. Zhang instead uses statistical physics to analyze collective patterns of behavior. “She brings a different set of skills, a different set of knowledge, to our research,” says Guanyu Su, a friend and postdoc in the lab. “That’s very refreshing.”

In her first paper on the boiling crisis, published in Physical Review Letters, Zhang used theory and simulations to identify scale-free behavior in boiling: just as in traffic, the same patterns appear whether zoomed in or out, in terms of space or time. Both small and large bubbles matter. Using this insight, the team found certain physical parameters that could predict a boiling crisis. Zhang’s mathematical tools both explain experimental data and suggest new experiments to try. For a second paper, the team collected more data and found ways to predict the boiling crisis in a wider variety of conditions.

Zhang’s thesis and third paper, both in progress, propose a universal law for explaining the crisis. “She translated the mechanism into a physical law, like F=ma or E=MC2,” Bucci says. “She came up with an equally simple equation.” Zhang says she’s learned a lot from colleagues in the department who are pioneering new nuclear reactors or other technologies, “but for my own work, I try to get down to the very basics of a phenomenon.”

Bucci describes Zhang as determined, open-minded, and commendably self-critical. Su says she’s careful, optimistic, and courageous. “If I imagine going from heat transfer to city planning, that would be almost impossible for me,” he says. “She has a strong mind.” Last year, Zhang gave birth to a boy, whom she’s raising on her own as she does her research. (Her husband is stuck in China during the pandemic.) “This, to me,” Bucci says, “is almost superhuman.”

Zhang will graduate at the end of the year, and has started looking for jobs back in China. She wants to continue in the energy field, though maybe not nuclear. “I will use my interdisciplinary knowledge,” she says. “I hope I can design safer and more efficient and more reliable systems to provide energy for our society.”

Getting to the bottom of the “boiling crisis” (MIT News)