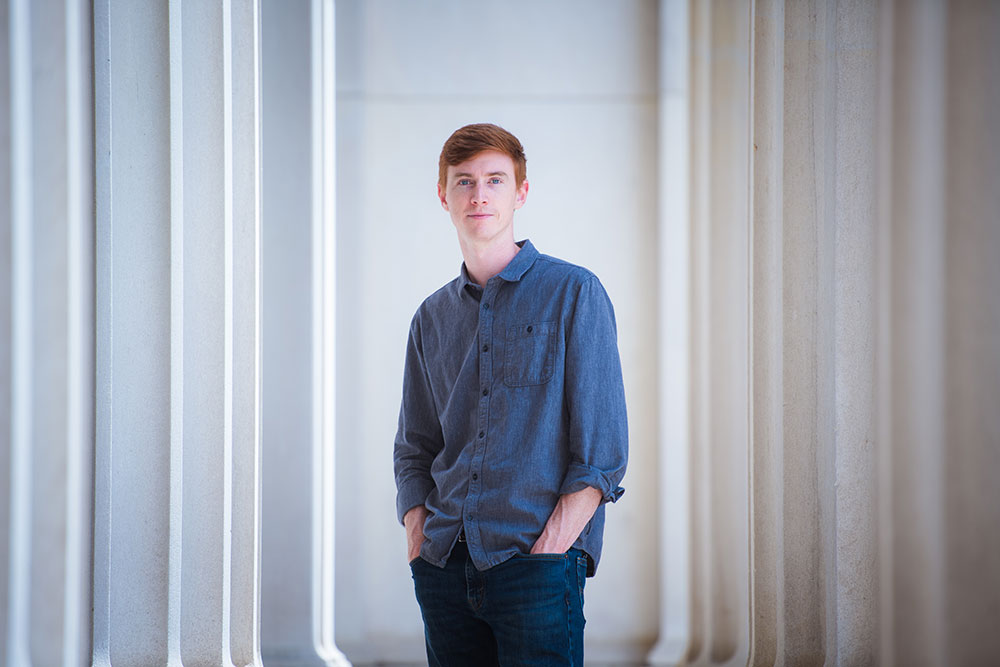 With a nuclear energy startup and cost-modeling tool, Robbie Stewart aims to speed construction of new plants for decarbonizing the economy

If nuclear energy is to play a pivotal role in securing a low-carbon future, researchers must not only develop a new generation of powerful and cost-efficient nuclear power plants, but provide stakeholders with the tools for making smart investment choices among these advanced reactors. W. Robb (Robbie) Stewart, a doctoral candidate in the Department of Nuclear Science and Engineering (NSE) is working on both these problems.

“Capital construction and operational costs are limiting the nuclear industry’s ability to expand at this critical moment, and if we can’t reduce these costs then nuclear doesn’t have a chance of being a big player in decarbonizing the economy,” Stewart says. “So I decided to focus my thesis research on an estimating tool that quantifies the costs of building a nuclear power plant, and which could be useful for assessing different reactor designs,” he says.

This precision cost-modeling method helps inform an ambitious project that Stewart has been pursuing alongside his dissertation work: designing and building a modular, integrated, gas high temperature nuclear reactor, called MIGHTR. With Enrique Velez-Lopez ’20 SM, Stewart launched a startup, Boston Atomics, to bring MIGHTR to life. “Our entire thesis as a company is that we have to simplify the civil construction elements of the project,” says Stewart

The team’s design filed a patent last October, and a $5 million grant in December from the Department of Energy’s Advanced Reactor Design Program (ARDP). MIT is helping drive this venture forward, with NSE’s Koroush Shirvan, John Clark Hardwick (1986) Career Development Professor overseeing the project, which includes partners from other universities.

Stewart’s creation of the nuclear plant cost modeling tool, sponsored by the Finnish energy company Fortum, and co-invention of the MIGHTR design have already won recognition: His research is headed for publication in several journals, and last year he received NSE’s 2020 Manson Benedict Award for Academic Excellence and Professional Promise.

Both Stewart’s doctoral research and his own reactor development are motivated to a large degree by a central concern: “Managing the construction of massive nuclear plants is extremely difficult, and too likely to result in cost overruns,” he says. “That’s because we don’t do enough of this kind of construction to be good at it.”  In the U.S., the key challenge to launching new commercial plants is not regulatory delay or public resistance, but inefficient construction practices, he believes.

Stewart views overcoming nuclear’s daunting building costs as paramount in the drive to bring more plants online in the near future. His modeling tool will make this more likely through precise estimations of construction risks and associated expenses—all based on actual DOE data on the costs of thousands of items required in commercial reactors, from pressure vessels and fuel to containment buildings and instrumentation.

This rigorous method of quantifying costs is aimed at smoothing the way to the next generation of nuclear reactors, such as small, modular nuclear reactor (SMRs). This type of advanced nuclear reactor can be fabricated in an economically desirable assembly-line fashion, and fit into sites where larger facilities would not. Some SMRs like MIGHTR will also be able to operate at higher temperatures. This attribute makes them uniquely suited for powering industrial processes that are currently served by greenhouse-gas emitting fossil fuel plants.

Commercial (typically light water) nuclear reactors supply nearly one-third of the world’s carbon-free electricity. But they must operate at temperatures that do not generally exceed 300°C, which means they cannot generate the heat required for petrochemical manufacturing and other power-hungry industrial needs. In constrast, next-generation reactors such as MIGHTR could turn the temperature dial up to 700°C and beyond. “Industrial process heat accounts for 10% of greenhouse gas emissions so an important criterion for selecting an advanced reactor would be whether it can meet the need of decarbonizing industries,” says Stewart.

His modeling tool could help determine which advanced nuclear designs offers the best investment bet. For instance, some SMRs might require 30 million work-hours to build and others eight million. Some facilities might involve technological uncertainties that make them too much of a gamble, no matter how much electricity or heat they purport to deliver. Investors, utilities and policymakers must feel confident that their decision strikes the optimal balance of desired reactor attributes and applications with the reactor’s risk and price tag. “Not all SMRs are equally cost competitive, and assessment can help distribute resources much more effectively,” he says.

Stewart, who grew up in Dallas, gravitated early toward cutting-edge technologies with the capacity to serve society. “I knew I wanted to be an engineer from a young age, and loved reading pop culture science trying to understand what the next generation of cars or jet engines might be,” he recalls.

Although tempted by aerospace studies, he found his groove in mechanical engineering as an undergraduate and then master’s student at the University of Texas at Austin. His master’s thesis on heat transfer in gas turbines led directly to work with GE Global Research. After four years spent on ventures to improve cooling efficiencies inside gas turbines, and then to model and predict the life of commercial jet engines, he grew restless.

Over the years he’d felt a mounting concern about the dangers of climate change, and a growing desire to train his engineering expertise on the challenge. “I wanted to be at the forefront of a new technology, and I wanted to be able to look back at the point of retirement and say I dedicated my engineering time and knowledge to this big problem,” says Stewart.  So he decided to leave his mechanical engineering career, and learn a new discipline at MIT. He quickly found a mentor in Koroush Shirvan. “He seemed to be solving problems the nuclear industry was facing, from operational and capital costs, to new fuel and enhanced safety designs,” says Stewart. “That resonated with me.”

MIGHTR drew from the kind of multidisciplinary perspective championed by Shirvan and other members of the department. Other designs for high temperature gas reactors envision housing components in a structure 60 meters tall. Stewart and his partner thought it might be simpler to lay the entire structure flat, including the reactor core and steam generator. Building height leads to great complexity and higher construction costs. The flat design leverages cost-efficient building techniques new to nuclear, such as pre-cast concrete panels

“We took our idea to a faculty meeting, where they threw stones at it because they wanted proof we could reduce the building size five times less than other HTRs without affecting safety,” Stewart recalls. “That was the birth of MIGHTR.”

Today, even as he presses forward on both MIGHTR and his cost-modeling research, Stewart has broadened his portfolio. He is assisting Associate Provost and Japan Steel Industry Professor Richard Lester with the MIT Climate Grand Challenges Program. “The goal is to identify a handful of powerful research ideas that can be big movers in solving the climate change problem, not just through carbon mitigation but by promoting the adaptation and resilience of cities and reducing impacts on people in zones experiencing extreme weather-related conditions, such as fires and hurricanes,” says Stewart.

After picking up his doctorate next year, Stewart plans on dedicating himself to Boston Atomics and MIGHTR. He also hopes that his modeling tool, free to the public, will help direct research and development dollars into nuclear technologies with a high potential for reducing cost, and “get people excited by new reactor designs,” he says.