A New Name for Pechblende

Martin Heinrich Klaproth: apothecary, lecturer to the Royal Prussian Artillery. Not yet a professor, for Berlin does not yet have a university.

Revolution is in the air. In France, the Eighteenth Century's absolute monarchy nears its climax. In Britain, the Nineteenth Century's industrial power is dominant. And in Germany, the Twentieth Century's great themes are already being sounded, faintly, somewhere in the orchestra. It is 1789.

"The ancient philosophers, who considered our globe as the center of the material universe ; and the sun, on the contrary, merely as a planet destined, like the others to a periodical circumvolution round the earth, flattered themselves that they had discovered a great mystery of Nature, in the agreement of the seven celestial bodies, which they assumed for planets, with the seven metals known in those times. In consequence of the various hypotheses which they founded on this supposed mystery, they allotted to each metal a certain planet, by whose astral effluvia its generation and maturation were to be promoted. In like manner, they took from these planets their names and symbols, to designate the metals subordinated to them.

"But as the above number of metals has long since been increased by later researches ; and as the discovery of new planets has not kept pace with that of metals, the metals newly found out have been deprived of the honour of receiving their names from planets, like the older ones. They, therefore, must be satisfied with the name given them accidentally, and, in most instances, by the common miner.

seventeen metallic substances have been acknowledged as distinct metals, each of a nature peculiar to itself. The design of this essay is to add one to that number ... 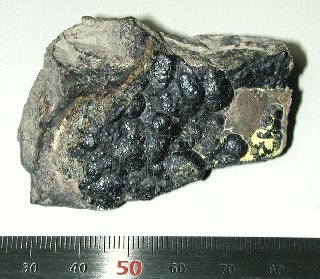 "The particular fossil, by the decomposition of which I have discovered this new metallic substance, is the black, or

Pechblende, (pseudo-galena of many) as it has been hitherto called ... This fossil is found at Joachimsthal in Bohemia and at Johann Georgenstadt, in the metalliferous mountains of Saxony. "The varieties of this fossil, that have hitherto occurred, may be divided into two sorts. The

first of them is found in brownish-black, massive, and, for the most part, outwardly flat, reniform pieces. It is resplendent both externally and internally ; wholly opake, and of an imperfect conchoidal fracture. It is brittle, admits of being easily comminuted by trituration, and affords then a black powder, tending to the greenish. Its specific gravity, upon an average, is 7,500.

second variety ... is greyish black, and exhibits various degradations, from the glittering to the dull or dim ...

Pechblende is tried by itself, before the blow-pipe, it undergoes no alteration, and is perfectly infusible ... To examine the relation of Pechblende to the fixed alkalis in the dry way, I triturated ½ ounce of it with one ounce of carbonated pot-ash, and urged the fire to the fusion of the mixture in the crucible. The mass poured out of the vessel was black-grey, compact, hard, and of a lamellar fracture. When ground, boiled with water, and filtered, the powder of the fossil remained on the paper with its former black colour, and also nearly its original weight. The colourless fluid had merely an alkaline taste, excepting only a slight indication of liver of sulphur... By this insolubility of Pechblende, in melting pot-ash, it was decided that it in no way belonged to the fossils which contain tungsten. I now proceeded to examine its habitudes with acids ..."

alkalis throw down the metallic portion from acid solutions of Pechblende, of a yellow colour..."

Eleven more pages of chemistry. Then:

"From the whole of these experiments it is manifest, that the

Pechblende does not belong either to the ores of zinc, or to those of iron, nor yet to the genus of tungsten or wolfram, and in general to none of the metallic substances hitherto known ; but, on the contrary, that it consists of a peculiar, distinct, metallic substance.

Pechblende, pitch-iron-ore, &c. are no longer applicable, and must be supplied by another more appropriate name. --- I have chosen that of Uranium, as a kind of memorial, that the chemical discovery of this new metal happened in the period of astronomical discovery of the new planet Uranus." Ah yes: Uranium! In the Nineteenth Century ...