The Net Advance of Physics RETRO:


THE ONE OF TIME, OF SPACE THE THREE:
The Collected Poems of Sir William Rowan Hamilton 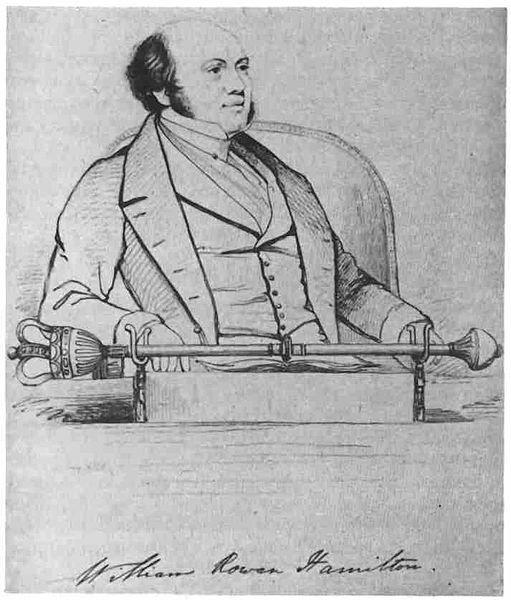 THE ONE OF TIME, OF SPACE THE THREE:
The Collected Poems of Sir William Rowan Hamilton

Hamilton was one of the greatest mathematicians and physicists of all time; he was also a medium-quality Romantic poet and a personal friend of William Wordsworth. Hamilton's poems are scattered through the three volumes of the 1882 biography by Rev. Robert Perceval Graves: Volume 1 --- Volume 2 --- Volume 3. [Dublin: Hodges and Figgis].

Reading Hamilton's poetry gives one a somewhat skewed impression: he tended to write most prolifically when he was miserable. Despite his unhappy love life, his struggle with alcoholism, and his constitutional inclination toward depression, he was by no means so continually wretched as his gloomier verses suggest, and indeed his prose writings and letters paint a quite different picture. Graves's book remains the indispensible resource for Hamilton's life; much further biographical detail may be found in the more modern Sir William Rowan Hamilton by Thomas L. Hankins [Baltimore: Johns Hopkins, 1980].

In judging Hamilton's poems, one can perhaps do no better than quote Wordsworth's reaction to the earlier ones:

"You send me showers of verses, which I receive with much pleasure, as do we all ; yet have we fears that this employment may seduce you from the path of Science which you seem destined to tread with so much honour to yourself and profit to others. Again and again I must repeat, that the composition of verse is infinitely more of an art than men are prepared to believe, and absolute success in it depends upon innumerable minutiæ, which it grieves me you should stoop to acquire a knowledge of. Milton talks of pouring 'Easy his unpremeditated verse' --- it would be harsh, untrue and odious to say there is anything like cant in this, but it is not true to the letter, and tends to mislead. I could point out to you five hundred passages in Milton upon which labour has been bestowed, and twice five hundred more to which additional labour would have been serviceable : not that I regret the absence of such labour, because no poem contains more proofs of skill acquired by practice. These observations are not called out by any defects or imperfections in your last pieces especially ; they are equal to the former ones in effect, have many beauties, and are not inferior in execution ; --- but again I do venture to submit to your consideration, whether the poetical parts of your nature would not find a field more favourable to their exercise in the regions of prose : not because those regions are humbler, but because they may be gracefully and profitably trod, with footsteps less careful and in measures less elaborate. And now I have done with the subject, and have only to add [the request] that when you write verses, you would not fail from time to time to let me have a sight of them."

I have organised the poems loosely by topic, although the divisions are clearly somewhat arbitrary.

(NOTE ADDED 2016 November 7: Another biography of Hamilton, Anne van Weerden's A Victorian Marriage [Stedum, Netherlands: J. Fransje van Weerden, 2015], has appeared since this page was originally created in 2014. Van Weerden's extremely close reading of the sources leads her to question some of the accepted wisdom about Hamilton's private life: she argues that his marriage was happier, and his drinking more moderate, than Twentieth Century historians supposed. This may well be true; certainly van Weerden is correct in noting that Graves's Life must be read in context and with caution rather than treated as infallible gospel. In reading the secondary literature about Hamilton, I have myself noticed a tendency of historians to project onto the man certain stereotypes --- the anguished Romantic genius, the drunken stage-Irishman, or both at once. No doubt the defeat of Hamilton's side in the bitter and counterproductive "vector war" also coloured Twentieth Century impressions of his life. The reader of the notes below should bear in mind that they largely reflect the possibly misleading Twentieth Century scholarly tradition.)