Version 17906 fixes an annoying bug where the main window pops completely blank but functions normally after a resize. This bug was caused by a recent change in GDK caching behavior and a 'clarification' in the cairo/GDK API documentation that altered correct usage. Previous versions of gPlanarity expected the old behavior, r17906 will work happily with both.

Newer builds of gPlanarity are no longer provided as statically linked 'universal' binaries as it is exceedingly difficult to build purely static binaries of any reasonable size on a modern UNIX platform. The source should build cleanly on any machine with the prerequisite development libraries installed. Not to mention-- it's probably also already packaged for your specific distribution.

Statically linked binary versions of gPlanarity 11496 (English only) are still available below. Beware bitrot in these builds; you're almost certainly better off compiling from source above.

All you need is to download the executable, gunzip it, and run it (you might want to stick it in /usr/local/bin or the like). The executable will create and save state in a .gPlanarity directory in the homedirectory of each user who runs it.

gPlanarity requires all of Xrender, an Xrender capable X server, freetype and fontconfig to run; typically these are present on any modern UNIX desktop. The above executable binaries are known to run fine on stock Debian, Ubuntu, Fedora, RHEL and Solaris/Athena boxes. Slack and Gentoo users will likely get results in accordance with their administration karma levels.

gPlanarity is a simple puzzle game involving untangling planar graphs for fun and prizes. If you tend to get addicted to cute little math puzzles, this one is a doozy.

gPlanarity is a super-clone of the flash Planarity game written by John Tantalo. The original Planarity ran well in IE and Firefox on other platforms, but was slow and liked to lock up or abort under Linux browsers.

gPlanarity implements gameplay identical to the original Planarity but adds some UI and game extras around the basic game such as multiple board generation algorithms, puzzle boards, complete backing state, group select/drag and so on. 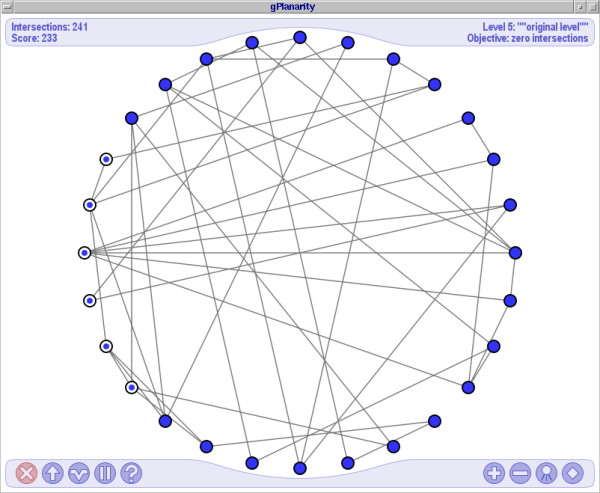 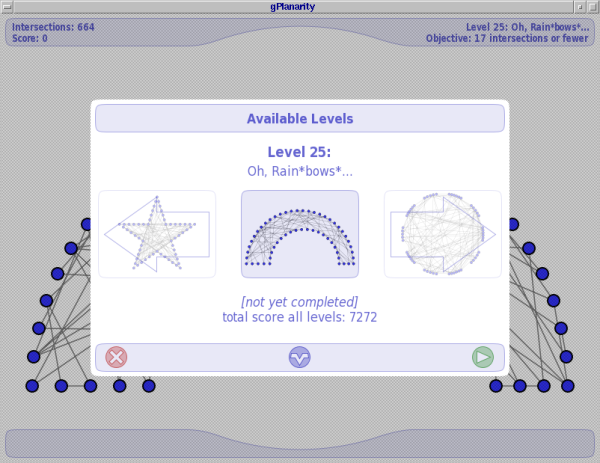