The Presidential Commission on Election Administration was established by Executive Order on March 28, 2013. Its mission is to identify best practices in election administration and to make recommendations to improve the voting experience.

Formerly the General Counsels for competing Presidential campaigns, the Co-Chairs bring bipartisan leadership to the Commission.

In Bob's 30 years of practice, he has provided counseling and representation on matters involving regulation of political activity before the courts and administrative agencies of national and state party committees, candidates for elective office, political committees, individuals, federal officeholders, corporations and trade associations, and tax-exempt groups. He founded and is a partner in the Political Law Group at the law firm of Perkins Coie. 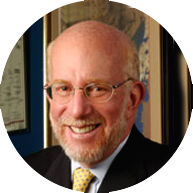 In both the 2004 and 2000 election cycles, Mr. Ginsberg served as national counsel to the Bush-Cheney presidential campaign; he played a central role in the 2000 Florida recount. In 2012 and 2008, he served as national counsel to the Romney for President campaigns. He also represents the campaigns and leadership PACs of numerous members of the Senate and House, as well as the national party committees. He serves as counsel to the Republican Governors Association and has wide experience on the state legislative level through Republican redistricting efforts.

In addition to advising on election law issues, particularly those involving federal and state campaign finance laws, he advises on ethics rules, redistricting, communications law, and election recounts and contests.

Before entering law school, he spent five years as a newspaper reporter at the Boston Globe, Philadelphia Evening Bulletin, The Berkshire (Mass.) Eagle, and The Riverside (Calif.) Press-Enterprise. He appears frequently on television and he has been a Fellow at Harvard University’s Institute of Politics and an adjunct professor of law at the Georgetown University Law Center. He was recently named one of the National Law Journal’s 100 Most Influential Lawyers in America.

He lives in Washington, D.C. with his wife Jo Anne. They have two grown children, Josh and Rebecca.

The Commission is comprised of distinguished election administrators and representatives of successful customer service-oriented businesses who bring experience drawn from the private and public sectors to help identify best practices in election administration.

Brian Britton is currently the Vice President of Global Park Operations and Initiatives at Walt Disney World Company. He joined Disney in 1999 and was previously the Vice President of Labor Operations, Operations Strategy and Operations Support at Walt Disney World Company. He is a board member of Community Based Care of Central Florida, a non-profit organization that manages Central Florida's foster care program, and a board member for the Florida Attractions Association, a tourism industry trade association. Mr. Britton is a Navy veteran and a former Naval Aviator. He received a B.S. in Systems Engineering from the U.S. Naval Academy, a Master's degree equivalent in the theory and operation of avionic systems in Naval Flight Officer School, and an M.B.A. from Harvard Business School.

Joe Echevarria has served as Chief Executive Officer of Deloitte LLP since June 2011. Mr. Echevarria joined Deloitte in 1978 and became an audit partner in 1988. Since that time, he has held a wide range of leadership positions, most recently as U.S. Managing Partner for Operations. As part of his current role, Mr. Echevarria chairs the U.S. Executive Committee, and is a member of the U.S. Board of Directors, the Deloitte Touche Tohmatsu Limited Board and the Americas Executive Committee. Mr. Echevarria serves on the Board of Trustees and chairs the University of Miami School of Business’s Board of Overseers. He received a B.A. in Business Administration from the University of Miami.

Trey Grayson is currently the Director of the Institute of Politics at the John F. Kennedy School of Government at Harvard University. Mr. Grayson previously served as Secretary of State for Kentucky, elected in 2003 and re-elected in 2007. Prior to his election, Mr. Grayson practiced law at the law firms of Greenebaum Doll & McDonald and Keating Muething & Klekamp. Mr. Grayson has served as the president of the National Association of Secretaries of State (NASS), chair of the NASS Elections Committee, and vice chair of the NASS Committee on Voter Participation. He received an A.B. from Harvard College, and a J.D. and M.B.A. from the University of Kentucky.

Larry Lomax is currently the Clark County Registrar in Nevada, a position he has held since 1999. Mr. Lomax serves as Nevada’s representative to the Election Assistance Commission’s Standards Board, was elected by the board’s members to the Standards Board Executive Board, and served on a Pew Foundation Committee focused on modernizing our nation’s system of registering voters. He previously served as Assistant Registrar in Clark County from 1998 to 1999. Prior to working in Clark County, Mr. Lomax was a Professor of Leadership and Ethics at the Air War College. As a former Air Force pilot, he accumulated over 4,000 hours of flying time in a 30-year career. He served two tours on the Joint Staff in Washington D.C. and was chosen to serve as the Air Force Colonel on the staff group supporting the Chairman of the Joint Chiefs of Staff. Mr. Lomax received a B.A. from Stanford University and an M.B.A. from the University of North Dakota. He is a Distinguished Graduate from the U.S. Air Force Officer Training School.

Michele Coleman Mayes is currently Vice President, General Counsel, and Secretary for the New York Public Library (NYPL). Ms. Mayes joined NYPL in August 2012 after serving as Executive Vice President and General Counsel for Allstate Insurance Company since 2007. She served as a Senior Vice President and the General Counsel of Pitney Bowes Inc. from 2003 to 2007 and in several legal capacities at Colgate-Palmolive from 1992 to 2003. In 1982, Ms. Mayes entered the corporate sector as managing attorney of Burroughs Corporation. After Burroughs and Sperry Corporation merged, creating Unisys Corporation, she was appointed Staff Vice President and Associate General Counsel for Worldwide Litigation. From 1976 through 1982, she served in the U.S. Department of Justice as an Assistant United States Attorney in Detroit and Brooklyn, eventually assuming the role of Chief of the Civil Division in Detroit. Ms. Mayes received a B.A. from the University of Michigan and a J.D. from the University of Michigan Law School.

Ann McGeehan is currently the Assistant General Counsel of the Texas County and District Retirement System. Previously, she served 22 years in the Elections Division of the Texas Secretary of State’s Office, including as the Director of Elections from 1995 to 2011 and the Director of the Elections Legal Section from 1991 to 1995. Ms. McGeehan is a past president of the National Association of State Election Directors, and a former member of the U.S. Election Assistance Commission Standards Board and Technical Guidelines Development Committee. Ms. McGeehan also served on an advisory group to the Pew Center on the States’ Election Initiative. She received a B.A. from the University of Texas and a J.D. from the University of Texas School of Law.

Tammy Patrick is currently a Federal Compliance Officer for the Maricopa County Elections Department in Arizona. In 2013, she became a voting member of the Institute of Electrical and Electronics Engineers’ working group on developing standards for a universal format for election results reporting. She is also a representative on the Mailer’s Technical Advisory Committee to the U.S. Post Office and serves as the co-chair of the Postal Task Force for the Election Center. She has previously served as a member of the Election Assistance Commission’s working group on Language Assistance for Unwritten Language, as an organizer of the 2007 Native American Voter Outreach Summit, and as a member of the Election Center’s National Task Force on Education and Training. Ms. Patrick received her B.A. from Purdue University.

Christopher Thomas is the Director of Elections in the Michigan Department of State, a position he has held since 1981. Mr. Thomas also teaches election law as an Adjunct Professor at the Thomas M. Cooley Law School in Lansing, Michigan. From 1977 to 1981, Mr. Thomas served as Director of Campaign Finance Information and Director of Campaign Finance Operations for the State of Michigan. Mr. Thomas served as the Director of Public Communications at the Federal Election Commission from 1975 to 1977. He began his election administration career in 1974 in Washington, D.C. where he was a Staff Assistant responsible for managing campaign finance filings in the Office of the Clerk of the U.S. House of Representatives. Mr. Thomas is a founding member of the National Association of State Election Directors and currently serves as President. Mr. Thomas has served on the Board of Advisors to the Election Assistance Commission since 2005. He received a B.A. from Michigan State University, an M.A. from St. Louis University, and a J.D. from the Thomas M. Cooley Law School.

Nathaniel Persily is the James B. McClatchy Professor of Law at Stanford Law School with courtesy appointments in the Departments of Political Science and Communication. Professor Persily’s scholarship, public service, and congressional testimony have focused on American election law and the regulation of politics. He has written several dozen articles on topics such as voting rights, redistricting, campaign finance and the regulation of political parties. He has also been appointed by courts as a Special Master or a nonpartisan expert to draw redistricting plans for states, such as Connecticut, New York, Georgia, and Maryland. In addition, he has written extensively on American public opinion regarding constitutional questions, as detailed, for example, in his two recent coedited books from Oxford Press: Public Opinion and Constitutional Controversy (2008) and The Health Care Case: The Supreme Court’s Decision and its Implications (2013). Professor Persily received a joint B.A. and M.A. in political science from Yale in 1992. He earned his J.D. from Stanford in 1998, where he was President of the Stanford Law Review, and received his Ph.D. in political science from U.C. Berkeley in 2002.

"Defending our freedom, though, is not just the job of our military alone. We must all do our part to make sure our God-given rights are protected here at home. That includes our most fundamental right as citizens: the right to vote. When any American, no matter where they live or what their party, are denied that right because they can’t afford to wait for five or six or seven hours just to cast their ballot, we are betraying our ideals. So tonight, I’m announcing a nonpartisan commission to improve the voting experience in America. And it definitely needs improvement. I’m asking two long-time experts in the field -- who, by the way, recently served as the top attorneys for my campaign and for Governor Romney’s campaign -- to lead it. We can fix this, and we will. The American people demand it, and so does our democracy."

By the authority vested in me as President by the Constitution and the laws of the United States of America, and in order to promote the efficient administration of Federal elections and to improve the experience of all voters, it is hereby ordered as follows:

Section 1. Establishment. There is established the Presidential Commission on Election Administration (Commission).

Sec. 2. Membership. (a) The Commission shall be composed of not more than ten members appointed by the President. The members shall be drawn from among distinguished individuals with knowledge about or experience in the administration of State or local elections, as well as representatives of successful customer service-oriented businesses, and any other individuals with knowledge or experience determined by the President to be of value to the Commission.

(b) The President shall designate two members of the Commission to serve as Co-Chairs.