The MIT Department of Nuclear Science and Engineering has established an endowed fund in honor of the late Professor Mujid Kazimi. The Mujid S. Kazimi Memorial Fund will be used to support graduate students in the Department. A $1 million endowment will fund in perpetuity a named fellowship, the Mujid S. Kazimi (1973) Fellowship in Nuclear Science and Engineering.

Impact of the Kazimi Memorial Fund

The Nuclear Science and Engineering Department is working to make nuclear power the safest, most economical, and most environmentally benign source of energy, while also laying the foundations for exciting new applications of nuclear science and technology.

Professor Kazimi made many important contributions to the design and safety of nuclear power plants, and the Kazimi Fellowship will create new opportunities for future graduate students to contribute in these areas.

The Department’s need for graduate fellowship funding, particularly support for first-year students, continues to grow. Our graduate enrollment is increasing, and to retain a healthy balance between fellowship and research assistantship funding for our students we need to build our portfolio of fellowships.

To make a multi-year pledge or gift by credit card, please select the Mujid S. Kazimi (1973) Graduate Student Support Fund on our giving page. For additional information or to discuss other ways of giving, please contact Edith Wun, Leadership Giving Officer, at ewun@mit.edu. 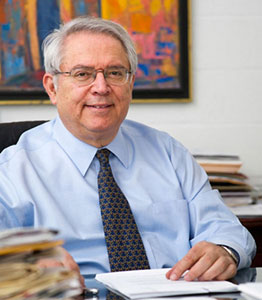 Professor Mujid S. Kazimi, the TEPCO Professor of Nuclear Engineering at MIT, was one of the world’s foremost educators and researchers in nuclear technology. At the time of his death, in June 2015, he held faculty appointments in MIT’s Departments of Nuclear Science and Engineering and Mechanical Engineering. He was also director of MIT’s Center for Advanced Nuclear Energy Systems and the Kuwait-MIT Center for Natural Resources and the Environment.

Professor Kazimi was an expert in the design and analysis of nuclear power plants and the nuclear fuel cycle. His contributions included numerous important technological advances that promise to enhance the safety and economics of nuclear power plants. He also made a number of influential contributions to the development of new strategies for the nuclear fuel cycle.

Since joining the MIT faculty in 1976 Professor Kazimi supervised 45 Ph.D. theses and 80 master’s theses at MIT, and many of his students have gone on to faculty positions at universities worldwide or to leadership positions in the nuclear energy field. He was dedicated to the advancement of his profession, and advised governments, universities, and research institutions on the development of nuclear energy. He also made important contributions to educational and scientific development across the Middle East. Among his many honors, he was a member of the National Academy of Engineering and received the Kuwait Prize in Applied Sciences in 2011. From 1989 to 1997 he served as head of the MIT Department of Nuclear Science and Engineering.

Professor Kazimi was born in Jerusalem in 1947. He received his bachelor’s degree in nuclear engineering from Alexandria University in Egypt in 1969, then came to MIT, where he earned an SM in 1971 and a PhD in 1973, both in nuclear engineering. He is survived by his wife of 41 years, Nazik Denny, by three children—daughter Yasmeen and sons Marwan (a 1996 MIT alumnus) and Omar—and by three grandchildren.