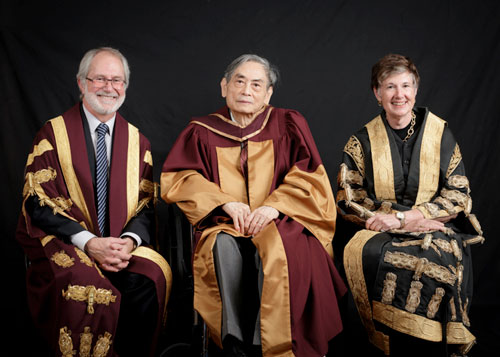 NSE’s Professor Emeritus Sow-Hsin Chen was awarded the Honorary Doctor of Science, honoris causa, from his alma mater, McMaster University at the November Convocation on November 18, 2016 by the University Chancellor Susan Labarge and University President Patrick Deane, as approved by the University Senate.

Prof. Chen was cited for many of his “groundbreaking work” including specifically the “investigations into the properties of disordered materials and supercooled and interfacial water, using neutron scattering and other related scattering techniques.”

Prof. Chen earned his PhD in 1964 from McMaster working under the supervision of Nobel Laureate, Bertram Brockhouse, after earning graduate degrees from the University of Michigan and the National Tsing Hua University. He has co-authored more than 460 research publications, and contributed significantly to advancing the fields of neutron, x-ray, and laser spectroscopy; hydrogen storage; and photon correlation spectroscopy. Prof. Chen has been on the faculty at MIT since 1968.