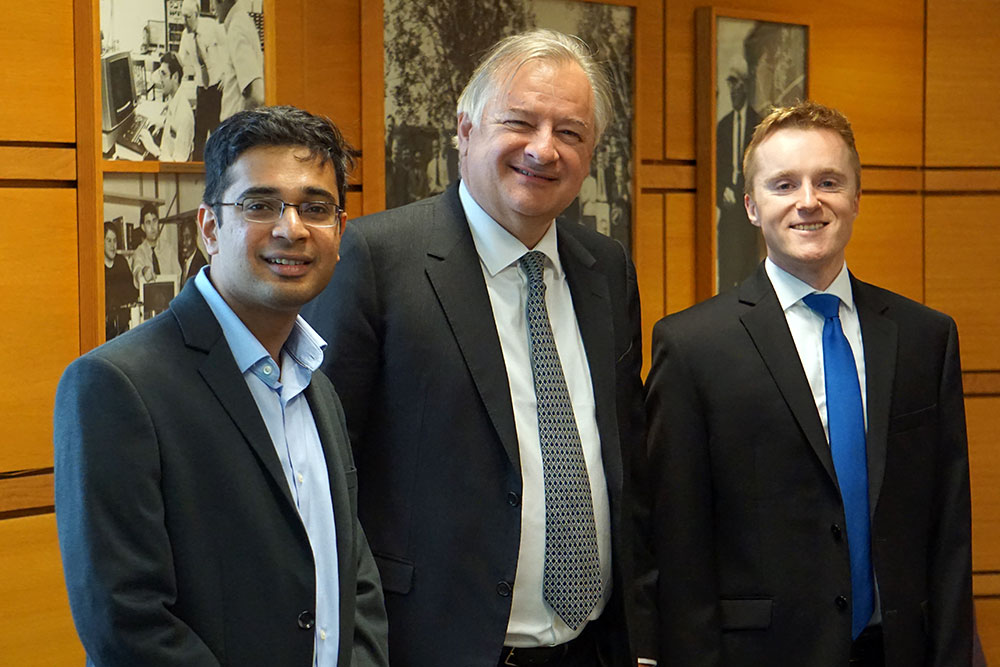 One of the most fundamental physical processes to both fission and fusion energy generation is the slowing down of fast neutrons. Both fission (the splitting of large atoms) and fusion (the combining of small atoms) typically lead to the production of very fast moving neutrons. It is generally desired that these neutrons interact with water or some other fluid, which slows the neutron to create another fission reaction or in the case of fusion to heat the liquid then used to generate electricity. Yet as they move through other materials, , such as steel or other structural materials present in the power plant, the neutrons collide with the nuclei of these other material and gradually slow down, transferring some of their energy to the material in the process.

Scientists have studied and modeled this process of neutron slowing for many decades now, and some of the most advanced models are based on Monte Carlo statistical methods Dr. John Walsh, currently of the Lawrence Livermore National Lab, and winner of the 2016 Del Favero Prize is developing more efficient and more accurate ways of modeling neutron slowing in Monte Carlo codes in an attempt to capture somewhat subtle physical phenomena that may get overlooked with simpler models.

The most important novelty of Walsh’s work is to include not only the motion of the fast neutron, but also the thermal motion of the material nucleus in the collision calculations, and to do so efficiently.  Past codes had been able to include these effects, but were almost prohibitively slow to run. Walsh’s new simulations, using Direct Cross Section Maxwellian Sampling, are able to run with the same physics fidelity, but many times faster than past codes. These new simulations open up the possibility of ever more accurate predictions of how materials will endure in future fission and fusion power plants, and even insight into high energy density and astrophysics.

Pink Diamonds and the MRI of the Future

The world of quantum mechanics often seems completely separated from everyday life, filled with esoteric math and mysterious effects used only in science fiction. Perhaps surprisingly, though, one of the central tools of modern medicine, the MRI (magnetic resonance imaging) machine, is based on a quantum effect.

The strong magnetic field of the MRI machine is able to align and detect the atomic spin of the hydrogen nucleus (almost like making a bunch of tops spin in the same direction), allowing doctors to map out water in your body, and thus detect different types of tissue like bone, muscle, and tendons. It turns out, however, that even the powerful magnetic field in an MRI machine can only align a tiny fraction of the atomic nuclei in your body at any given time, which is part of the reason why MRI scans take so long and the resolution is limited.

Dr. Ashok Ajoy, currently of the University of California, Berkley and winner of the 2017 Del Favero Prize, however, has come up with an innovative way to improve upon traditional MRI scans, using, of all things, pink diamond powder. Spins in diamonds in which a carbon atom has been replaced by a nitrogen atom can be aligned using a combination of everyday objects — a Wi-Fi antenna, a laser pointer, and a fridge magnet. The nitrogen also has the added aesthetic side effect of making the tiny diamonds pink.

This spin-aligned diamond can then be used to align the spin of a liquid, even water, which could then be ingested by a patient before an MRI. The resulting MRI scan would be much faster and more accurate than current scans, without even having to replace the machine. Ajoy and his team have been able to make this revolutionary spin aligning system for only a few thousand dollars, and are able to produce results rivaling multi-million dollar industrial alternatives.  In only a few years, the next generation of MRI scans may be commonplace, made possible by Ajoy and his pink diamonds.

The Del Favero Thesis Prize, established in 2014 with a generous gift from alum James Del Favero (SM ’84), will be awarded annually to a PhD graduate in NSE whose thesis is judged to have made the most innovative advance in our field. Previous winners of the prize are Dr. Zach Hartwig (2014) and Dr. Mingda Li (2015/6).