A fix for foulants 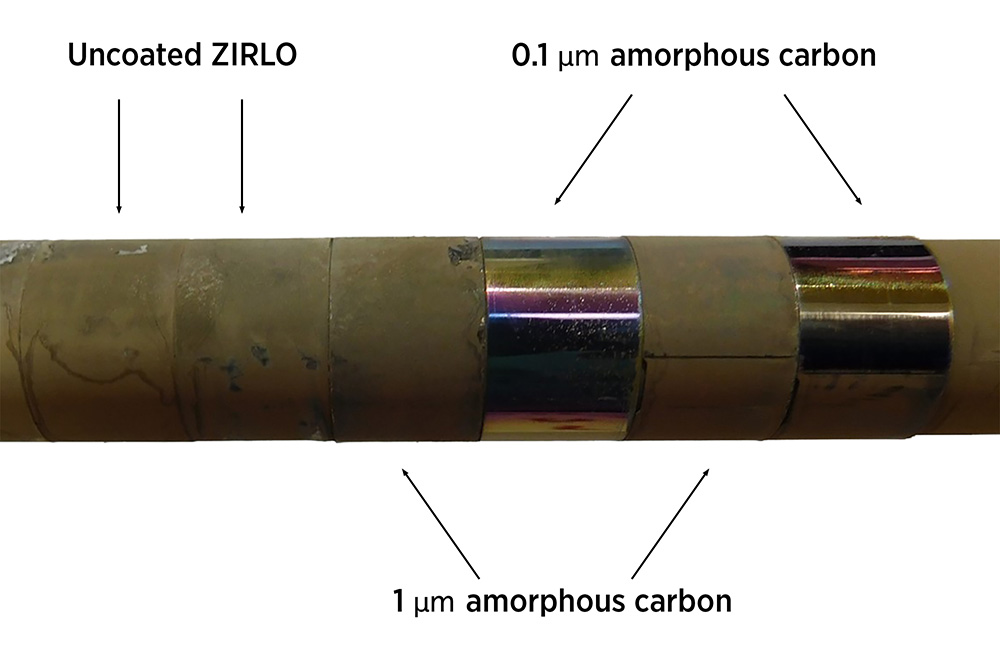 Researchers have devised a practical solution for preventing corrosive buildup in nuclear systems. Image shows specimens of a standard reactor zirconium alloy with and without our crud-resistant coating. The uncoated specimens at left are covered with crud in our flowing reactor experiment, while the two coated specimens came out as clean as they went in.

When clogs and corrosion threaten residential water and heating systems, homeowners can simply call a plumber to snake a drain or replace a pipe. Operators of nuclear power plants aren’t nearly so lucky. Metallic oxide particles, collectively known as crud in the nuclear energy world, build up directly on reactor fuel rods, impeding the plant’s ability to generate heat. These foulants cost the nuclear energy industry millions of dollars annually.

This issue has vexed the nuclear energy industry since its start in the 1960s, and scientists have only found ways to mitigate, but not cure, crud buildup. But that may be about to change.  “We believe we have cracked the problem of crud,” says Michael Short, Class of ’42 Associate Professor of Nuclear Science and Engineering (NSE), and research lead. “Every test we’ve done so far has looked good.”

In a paper published online in April 2020 by Langmuir, an American Chemical Society journal, Short and MIT colleagues describe their work, which offers a novel approach to designing fouling-resistant materials for use in nuclear reactors and other large-scale energy systems. Co-authors on the paper are Cigdem Toparli, a post-doctoral fellow in NSE at the time of the study, NSE graduate students Max Carlson and Minh A. Dinh, and Bilge Yildiz, professor of nuclear science and engineering, and professor of materials science and engineering.

The team’s research goes beyond theory and lays out specific design principles for anti-foulant materials. “One important aspect of our project was to make a practical solution to the problem today—no pie-in-the-sky for our children’s generation but something that has to work with everything that exists now,” says Short.

Exelon, one of the nation’s largest power generators, is confident enough in the viability of the MIT team’s anti-foulant designs that it has started making plans to validate them in one of its commercial reactors. In the highly regulated domain of nuclear energy, the time from research idea to application could set a speed record.

The forces behind crud

Short has been investigating crud since 2010, when he joined the Consortium for Advanced Simulation of Light Water Reactors (CASL), a project sponsored by the Department of Energy to improve the performance of current and future nuclear reactors. His early work in the area was supported by both CASL and EPRI. As a post-doctoral associate at MIT, he developed computer models of crud.

“This made me read a lot about crud, and how different surface forces can cause things to stick to each other such as the corrosion products circulating in coolant fluid that accumulate on fuel rods,” says Short.  “I wanted to learn how it accumulates in the first place, and maybe find a way to actually prevent crud formation.”

Toward that end, he set up a boiling chamber made out of spare parts in the basement of Building NW22 to see which materials stuck to each other, and received a small grant to learn how to test the growth of crud in reactor conditions in Japan. He and his students built a flow loop (a way of recreating reactor conditions without radiation), and conducted a series of experiments to see which materials encouraged, and which discouraged, the growth of crud.

Researchers have floated a host of surface forces as candidates for causing the stickiness behind crud: hydrogen bonding, magnetism, electrostatic charges. But through experimentation and computational analysis, Short and his team began to suspect an overlooked contender: van der Waals forces. Discovered by nineteenth-century Dutch physicist, Johannes Diderik van der Waals, these are weak electric forces that account for some of the attraction of molecules to each other in liquid, solids, and gases.

“We could rule out other surface forces for simple reasons, but one force we couldn’t rule out was van der Waals’,” says Short.

Then came a major breakthrough: Carlson recalled a 50-year-old equation developed by Russian physicist Evgeny Lifshitz that he had come across during a review of materials science literature.

“Lifshitz’s theory described the magnitude of van der Waals forces according to electron vibrations, where electrons in different materials vibrate at different frequencies and at different amplitudes, such as the stuff floating in coolant water, and fuel rod materials,” describes Short. “His math tells us if the solid materials have the same electronic vibrations as water, nothing will stick to them.”

This, says Short, was the team’s “Aha” moment. If cladding, the outer layer of fuel rods, could be coated with a material that matched the electronic frequency spectrum of coolant water, then these particles would slip right past the fuel rod. “The answer was sitting in the literature for 50 years, but nobody recognized it in this way,” says Short.

“This was real thinking outside the box,” says Chris Stanek, a technical director at Los Alamos National Laboratory engaged in nuclear energy advanced modeling and simulation, who was not involved in the research. “It was an unconventional, MIT approach—to step back and look at the source of fouling, to find something no one else had in the literature, and then getting straight to the physical underpinnings of crud.”

The researchers got to work demonstrating that van der Waals was the single most important surface force behind the stickiness of crud. In search of a simple and uniform way of calculating materials’ molecular frequencies, they seized on the refractive light index—a measure of the amount light bends as it passes through a material. Shining calibrated LED light on material samples, they created a map of the optical properties of nuclear fuel and cladding materials. This enabled them to rate materials on a stickiness scale. Materials sharing the same optical properties, according to the Lifshitz theory, would prove slippery to each other, while those far apart on the refractive light scale would stick together.

By the end of their studies, as the paper describes, Short’s team had not only come up with a design principle for anti-foulant materials but a group of candidate coatings whose optical properties made them a good (slippery) match for coolant fluids.  But in actual experiments, some of their coatings didn’t work. “It wasn’t enough to get the refractive index right,” says Short. “Materials need to be hard, resistant to radiation, hydrogen, and corrosion, and capable of being fabricated at large scale.”

Additional trials, including time in the harsh environment of MIT’s Nuclear Reactor Laboratory, have yielded a few coating materials that meet most of these tough criteria. The final step is determining if these materials can stop crud from growing in a real reactor. It is a test with a start date expected next year, at an Exelon commercial nuclear plant.

“Fuel rods coated with antifoulant materials will go into an operating commercial reactor putting power on the grid,” says Short. “At different intervals, they come out for examination, and if all goes right, our rods are clean and the ones next door are dirty,” says Short. “We could be one long test away from stopping crud in this type of reactor, and if we eliminate crud, we’ve wiped away a scourge of the industry.”

Funders of this research include Exelon Corporation through the MIT Energy Initiative’s Center for Advanced Nuclear Energy Systems (CANES); Statoil Petroleum AS (now Equinor); and the International Collaborative Energy Technology R&D Program of the Korea Institute of Energy Technology Evaluation and Planning, which is funded by the Korean Ministry of Trade Industry and Energy.