A layered approach to safety 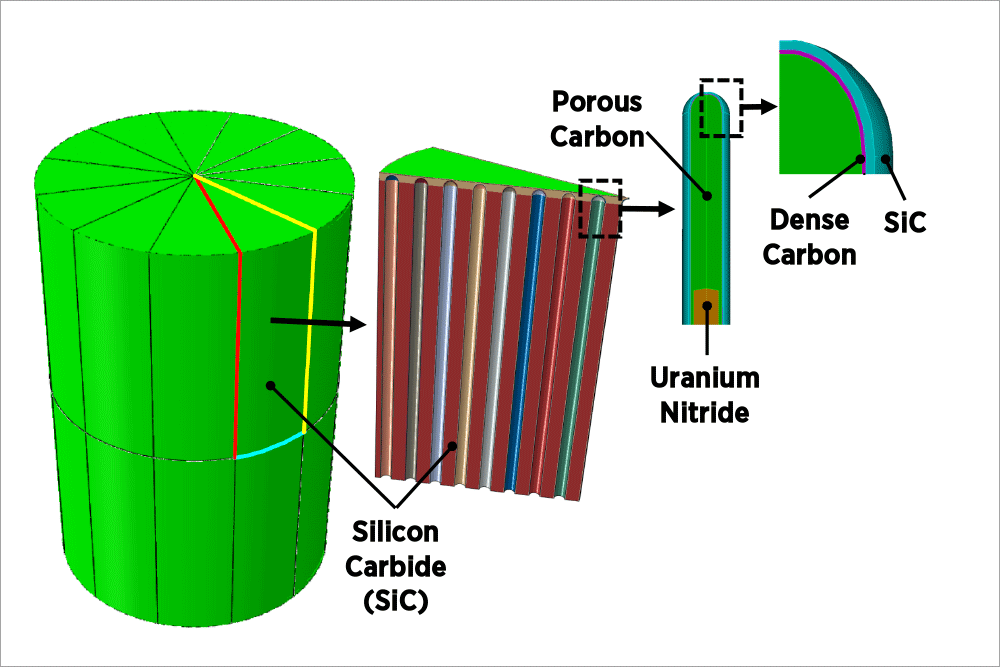 In 2011 the nuclear energy industry faced one of its greatest challenges. The disabling of three Fukushima Daiichi nuclear reactors in the wake of an earthquake-triggered tsunami sparked a global race for solutions to improve nuclear safety—a race focused on accident-tolerant fuel (ATF) to avert future reactor breakdowns.

Researchers in the U.S. rose to the challenge, among them Koroush Shirvan SM ’10 PhD ’12, assistant professor in the Department of Nuclear Science and Engineering. After a series of studies on ATF concepts that might be deployed in the near term in collaboration with the nuclear industry, Shirvan has seized on an innovative nuclear fuel concept that addresses key safety issues while offering potential improvements in reactor performance.

“By applying an integrated, system-level multidisciplinary approach, we accelerated R&D and now have a new design and demonstration results after just a few years,” says Shirvan. He describes this nuclear technology in a paper published in the April 15 2020 Applied Energy — a special edition of the journal devoted to a conference highlighting significant research findings. His coauthors are nuclear science and engineering postdoctoral associate and fellow Wei Li, and Joseph Pegna and Shay Harrison, with high-performance fibers and powders manufacturing firm Free Form Fibers LLC.. The team’s research was funded by a series of Department of Energy Small Business Innovation Research grants.

From the start, Shirvan’s team sought both fuel and cladding alternatives. “In Fukushima, there were hydrogen explosions because of interactions between the conventional zirconium-based fuel cladding (the outer layer of fuel rods) and high temperature steam produced when the safety system failed and coolant water heated up,” he says.

Hydrogen leaked out of the core and detonated in the reactor building itself. “Our goal was to come up with fuels that can last longer during potential heat-up events and reactor cladding materials that won’t generate much combustible hydrogen as quickly as zirconium.”

The breakthroughs described in the paper flowed from collaboration with Free Form Fibers, a company co-founded by former Stanford University materials scientist Pegna, a pioneer in additive manufacturing. The firm approached Shirvan several years ago with an idea for using their patented1 3-D laser printing technique to create a new fuel. “They proposed using chemical vapor deposition (CVD) to create fuel fibers in which protective material coats each fiber, layer by layer,” says Shirvan. “This enables the fuel to serve as its own containment.”

The concept was to pack these CVD-fabricated, cylindrically shaped fuel particles into a bundle that fits into a typical fuel rod, and replace the conventional zirconium fuel rod cladding with silicon carbide composite, to slow down hydrogen generation. This would hypothetically enable “retrofitting” current nuclear plants with new and safer materials.

“The U.S. and other nations with nuclear power want to avoid shutting down current reactors, and are looking for replacement fuels and materials that can be certified in a reasonable length of time,” says Shirvan.  Around the world there are around 450 commercial reactors (nearly 100 in the U.S.), and the great preponderance of these are cooled by water.

From concept to demonstration

But Free Form Fiber’s basic notion required some significant tweaking, says Shirvan. And he had ideas about specific geometries, dimensions and fuel material “that would give the concept the highest potential to be feasible.” One of his critical contributions involves a fabrication scheme that seems drawn straight from a medical spa.

“Imagine a bald spot on your head, where you want to grow hair,” Shirvan says. “You focus the laser depositing materials on that bald spot, and the cylindrical hair starts growing straight up in that region, and you continue making hairs until you have a bundle covering the entire region.”

The base of each “hair” is made out of uranium nitride fuel, which is coated with a soft buffer layer made out of porous carbon, followed by denser carbon, followed by silicon carbide — a material with a very high melting point. Spaces are filled by more silicon carbide, with bundles stacked on top of each other vertically, then placed inside a cladding also made out of silicon carbide or other ATF material. Free Form Fibers personnel were able to demonstrate this 3D laser fabrication technique using uranium at the Materials and Chemistry Laboratory, Inc. (MCLinc) at Oak Ridge, Tennessee — a rare opportunity in the field to springboard their concept toward manufacturing reality.

These uranium and carbon fuel cylinders wrapped in silicon carbide, stuffed into a silicon carbide-clad fuel rod, can theoretically survive temperatures up to 1800º C,  which might enable nuclear reactors to run at higher power levels.

There are other robust fuels that reduce the chance of releasing fission products at high temperatures using similar layered fabrication schemes, such as Triso (TRi-structural ISOtropic particles). But these fuels are mainly intended for advanced reactors since they are limited by fuel packing guidelines in conventional water-cooled reactors. And, notes Shirvan, “The 3-D technique allows us to pack more fibers into our bundles, meaning higher fuel per volume.” Greater fuel density means more efficient use of fuel.

“The group’s research definitely advances the search for accident tolerant fuel, by adding an additional barrier to fission products while also maintaining high fuel density,” says Nicholas Brown, associate professor in the Department of Nuclear Engineering, at the University of Tennesee Knoxville who was not involved in this study. “Their core innovation is coming up with a manufacturable fuel concept that adds a layer of defense against the release of radioactive fission products in an accident.”

While this silicon carbide coated fuel and cladding could lead to improvement in both safety and performance for current-generation, water-cooled commercial reactors, Shirvan does not see adoption of their nuclear innovations in this domain in the immediate future. “Nuclear plants are currently under economic hardship, and it’s unlikely that they will invest in these new technologies unless it will result in direct savings,” he says.

But this concept remains extremely viable for other applications. “Based on preliminary results, our fuel is potentially game changing for microreactors, nuclear space propulsion, and other advanced reactors that need robust, accident tolerant fuels,” says Shirvan.

With commercial vendors in these areas already knocking at the door, the research group is gearing up for radiation studies of the fuel in MIT’s Nuclear Reactor Laboratory.  “The ATFs that people are developing in the fission community are based on concepts that are at least 30 years old, but our new fuel design is getting to the irradiation testing point incredibly quickly,” says Shirvan. “On a very small budget and very short time scale, we’re able to do this because our team has integrated materials science and nuclear power engineering, which really accelerates the process of achieving technological readiness.”