The Sigma Xi Scientific Research Society hosts an annual Student Research Conference which showcases some of the premier student research in the world, and connects senior researchers with students. Students present research to be evaluated by professional researchers in all fields of Science and Engineering. Forrest, whose presentation was judged the best in the "Engineering" category, was awarded a medal for his outstanding research. 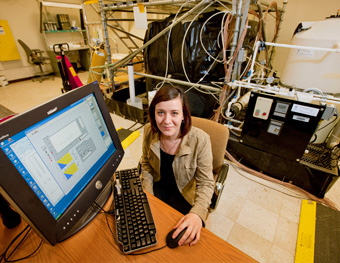 Nuclear Science and Engineering graduate student Anna Nikiforova is one of five graduate students who were selected for the prestigious Stewardship Science Graduate Fellowship (SSGF).

Sponsored by the DOE’s National Nuclear Security Administration (NNSA), the goal of this four-year program is to provide support and opportunities for Ph.D. candidates in fields of study that are of interest to stewardship science. These include areas such as high-energy density physics, low-energy nuclear science, or properties of materials under extreme conditions.

The Fellows spent this past summer at the Lawrence Livermore National Laboratory (LLNL) in California completing a required "practicum". This research experience allows Fellows to work on assignments that are outside the main focus of their doctoral thesis work.

Nikiforova worked in the Advanced Detectors Group of the Physics Division. Her project involved exploring the applicability of water-based Cherenkov detectors to signature high-energy gamma and neutron radiation from photofission of special nuclear materials.

“I found the SSGF program particularly attractive because of an opportunity to spend a summer at a national lab.

“I think that the best part of being here has been to work on projects that are challenging and exciting with people who share my passion for nuclear science. LLNL is definitely a collaborative, never-boring environment.”

Nuclear Science and Engineering graduate student Evan Davis is the most-recient recipient of the SSGF, which are also currently held by two other MIT students: Krystle Catalli (EAPS) and Alex Zylstra (Physics).

>> Learn more about the Anna's experience

NSE graduate students Nathan Gibson and Paul Romano were recently awarded Rickover Fellowships in Nuclear Engineering. Nathan Gibson is a first year graduate student in NSE, whose research interests include computational transport theory and reactor physics. His current project focuses on energy self-shielding calculations with the discrete generalized multigroup method. Paul Romano’s research includes collaborations with Thomas Sutton at Knolls Atomic Power Laboratory and Forrest Brown at Los Alamos National Laboratory. He is in his fourth year of graduate study and plans to continue his research on nuclear methods development at one of these labs upon graduation. Both Gibson and Romano work with Professor Benoit Forget at NSE.

The Rickover Fellowship provides 24 months of funding for students enrolled in a full-time masters degree program and 48 months of funding for those in a doctoral degree program. The Fellowship is designed to meet the needs of the Naval Reactors Division of the U.S. Department of Energy (DOE) for appropriately trained personnel for the maintenance and development of science and engineering technology as it pertains to naval nuclear propulsion. It assists in preparing students for roles in the naval nuclear propulsion program and supports the broader objective of advancing fission energy development through the research efforts of the Fellows. The technical areas of greatest interest include reactor physics, nuclear materials science and engineering, shielding technology, and two-phase flow.

>> Learn more about the Rickover Fellowship in Nuclear Engineering

Joseph Fricano studies computer modeling of thermal hydraulics and fuel performance for sodium fast reactors with Professor Jacopo Buongiorno. “The goal of my research is to obtain a more accurate picture of fuel rod behavior by giving the fuel performance models data from sub-channel analysis” says Fricano. “This allows the fuel behavior to be analyzed under conditions accurately molded by sub-channel analysis, including many transients.”

Third-year graduate student Stefano Passerini worked under the supervision of Dr. Tom McKrell and Professor Jacopo Buongiorno on a project focused on the study and experimental characterization of molten salt mixtures for use in high temperature power systems during his first two years at MIT. Last summer, having completed his M.S. thesis, Passerini started his doctoral research on nuclear fuel cycle analysis under the supervision of Professor Kazimi.

Paul Romano, who is also a Rickover Fellow, was awarded the Walter Meyer Scholarship, which is one of nine named scholarships given by ANS. Romano’s current research focuses on advanced parallel algorithms for Monte Carlo particle transport simulations. “The hope is that new parallel algorithms will enable better performance for simulations on the next generation of "exascale" supercomputers. These supercomputers will impose unique challenges from a hardware perspective, notably a lesser amount of system memory per processor, that require us to rethink how we design software for simulation” says Romano.

Each student will receive $3000 award. 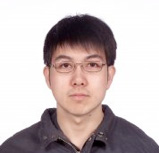 NSE graduate student Yue Fan won the Young Scientist Best Presentation Award at the Nuclear Materials Conference (NuMat) for his paper entitled Microstructural Evolution of Vacancy Clusters in bcc Fe:  Kinetics at the Experimental Time Scales. The award, for originality of the research and quality of the presentation, was presented at the inaugural NuMat held on 4-7 October 2010, in Karlsruhe, Germany.

The paper was co-authored with Akihiro Kushima and Profs. Sidney Yip and Bilge Yildiz of the Department of Nuclear Science and Engineering. It discusses a new approach at the atomic scale to predict irradiated microstructure evolution at long time scales, beyond the reach of traditional atomistic simulations.

NuMat, formed in association with Journal of Nuclear Materials, serves as an umbrella for international meetings on nuclear materials science for fission reactors, including the nuclear fuel cycle and is intended to be an international key scientific forum in the field.

Current NSE graduate student Christian Haakonsen and incoming students Mark Chilenski and John Hanson are among 15 MIT students awarded Science Graduate Fellowships by the Department of Energy’s Office of Science. The fellowship is part of a new initiative to encourage outstanding students to choose careers in science and to support basic research by young scientists in a variety of fields including biology, chemistry, physics, computational science, engineering, environmental sciences, and mathematics.

Mark Chilenski’s graduate research will focus on the Levitated Dipole Experiment (LDX), a unique plasma confinement device that uses an inductively charged, magnetically levitated superconducting magnet in the middle of the plasma to provide a poloidal magnetic dipole field. John Hanson’s research interests lie in energy policy and solutions to the nation’s energy challenges. He will focus on the advancement of nuclear power as an integral part of the future energy solution. Mark Chilenski and John Hanson will join the Department in Fall 2010.

This is the first year of DOE’s Science Graduate Fellowship Program, which will support 150 students nationwide. “The exceptionally talented students selected as graduate fellows are part of our nation's next generation of scientific and technical leaders,” said DOE Secretary Chu. “This investment in the training of scientists and engineers is part of the Administration's continued effort to ensure that America has the scientific and engineering workforce we need to secure our energy future and our continued economic competitiveness.” Each fellow will be provided $50,500 per year for up to three years to support tuition, living expenses, research materials and travel to research conferences or to Department of Energy scientific user facilities.

Graduate students Mark Massie, Robert Petroski, and Jeremy Roberts, of the Department of Nuclear Science and Engineering, have been named winners of the 2010 Innovations in Fuel Cycle Research Awards sponsored by the Department of Energy (DOE). This new award program is designed to facilitate innovation, the creation of new ideas, and education in fuel-cycle-relevant disciplines. Students were judged on published or submitted papers in any of the following eight categories: Nuclear Science and Engineering, Fuel Separations and Waste Forms, Advanced Materials, Nuclear Fuels, Isotope Transmutation, Nuclear Material Accountability and Control Instrumentation, Systems Engineering and Analysis, and Energy Policy (with a focus on Nuclear Energy). Robert Petroski and Mark Massie placed first and second respectively in the Isotope Transmutation category; Jeremy Roberts placed second in the Nuclear Science and Engineering category. All three will receive cash prizes and will present their work at the 2010 ANS Winter Meeting.

>> learn more about the award

The following awards were announced at the Department of Nuclear Science and Engineering/American Nuclear Society’s Awards dinner on May 7, 2010. 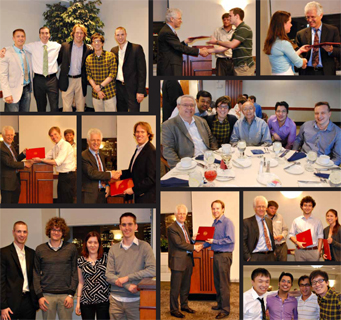 Photos from left to right:

Manson Benedict Award. Presented to a graduate student for excellence in academic performance and professional promise in Nuclear Science & Engineering

Outstanding Student Service Award in recognition of exceptional services to the students, the department and the entire MIT community.

Ruth and Joel Spira Award for Distinguished Teaching.
This award is made possible by a gift from Ruth and Joel S. Spira to acknowledge the tradition of high quality engineering education at MIT.

Outstanding Teaching Award, presented by the student chapter of the American Nuclear Society

Staff Award, presented by the student chapter of the American Nuclear Society

“Thomas McKrell is one of those very special research scientists at MIT” — students and faculty alike agree. Tom joined NSE in the Spring of 2006 and immediately became an active and engaged member of the research and teaching community. Excellent mentor, dedicated, sincere, and enthusiastic, are just a few of the characteristics that describe Tom, a 2010 winner of the School of Engineering Infinite Mile Award.

Tom’s extensive experience in academia and industry, commitment, and caring have made him a highly effective mentor to students and fellow researchers. He has also been a catalyst in forging interdepartmental research connections amongst NSE, MechE, and ChemE at MIT, and in establishing research and analytical techniques that bring the three areas of study together. As the Department’s Environment, Health, and Safety Coordinator, Tom has shown great dedication in working to ensure the efficiency and safety of the NSE labs. In the words of one colleague, Tom’s leadership has helped develop “world-class labs with state-of-the-art equipment and instrumentation”. According to students, colleagues, and visitors to the Green lab he is invariably generous with his time, and his excitement about the work is infectious. As another colleague points out, not only is he an invaluable resource, but also a “thoughtful, kind, and really fun member of the team!”