NSE graduate student Uuganbayar Otgonbaatar, Jean-Marie Doux (IMN, France) and Fuminao Kishimoto (Tokyo Tech.) won an award for team collaboration at the fourth International Education Forum on Environment and Energy Science. The Forum, sponsored by the program for Leading Graduate Schools “Academy for Co-creative Education of Environment and Energy Science (ACEEES)” was held at the Tokyo Institute of Technology. Their presentation titled “Discussion of environmental destruction and civilization collapse with review of relevant history” focused on how climate change and global warming presents risks to civilization if unmitigated in terms of surface temperature increase, change in precipitation patterns, and sea level rise. We reviewed historical precedents when a community of people lead to the civilization collapse due to own actions and warned of consequences of inaction on climate. 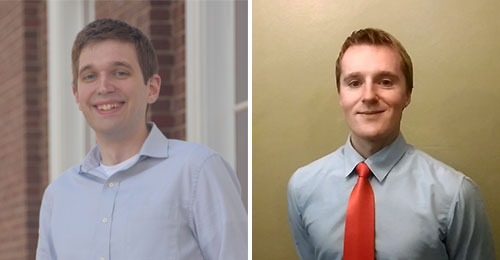 Graduate students Matthew Ellis and Jon Walsh have received graduate scholarships awarded by the American Nuclear Society (ANS) for “academic excellence and outstanding achievements to a full-time graduate student in the field of nuclear science and engineering.”

Ellis is investigating multiphysics feedback in Monte Carlo simulations using the Monte Carlo code OpenMC developed at MIT along with the Multiphysics Object-Oriented Simulation Environment (MOOSE) developed by the Idaho National Laboratory. This work will enable the modelling of fuel performance and thermal-hydraulic feedback mechanisms by closely integrating the simulation capabilities of OpenMC in the MOOSE framework. Detailed multiphysics simulations such as these are essential to effectively evaluate the safety and performance of advanced reactor designs.

Walsh is working on improving the modelling of the unresolved resonance range in nuclear data evaluations for Monte Carlo methods. His work has provided efficient methods for modelling the temperature dependence of nuclear data in that energy range, and more importantly in determining the uncertainty associated with commonly used probability tables which is of utmost importance for the design of fast spectrum reactors. 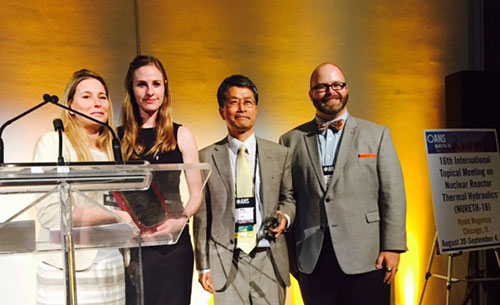 NSE graduate student Carolyn Coyle was a winner of the NURETH-16 Young Professional Award and was one of eight winners of the Best Paper Award for her paper entitled “Synthesis of CRUD and its Effects On Pool and Subcooled Flow Boiling”.

The purpose of the Student Program is to encourage the active participation of students by submitting high quality technical papers on the various aspects of nuclear thermal-hydraulics. NURETH-16 awarded travel fellowships for the top student papers, undergraduate or graduate.

NURETH-16 was dedicated to NSE Professor Mujid Kazimi (1947-2015) — renowned scholar, educator and researcher in nuclear technology, and leading expert in the design and analysis of nuclear power plants and the nuclear fuel cycle. An ad-memoriam session was held on Tuesday, September 1, 2015, to celebrate his contributions to making nuclear power safer, more reliable and available to all.

NSE’s William Boyd and Andrew Dykhuis have won awards in the 2015 Innovations in Fuel Cycle Research Awards sponsored by the U.S. Department of Energy, Office of Fuel Cycle Technologies.

Andrew Dykhuis, also a Ph.D. student in Nuclear Science and Engineering, has been awarded a Second Place prize in the category of Advanced Fuels. His award-winning research paper, “HOGNOSE: A New Model for Corrosion in PWRs,” was presented at the American Nuclear Society Annual Meeting in June 2015.

The Innovations in Fuel Cycle Research Awards program is designed to: 1) award graduate and undergraduate students for innovative fuel-cycle-relevant research publications, 2) demonstrate the Department of Energy’s commitment to higher education in fuel-cycle-relevant disciplines, and 3) support communications among students and DOE representatives.

The program awarded 18 prizes in 2015 for student publications relevant to the nuclear fuel cycle. In addition to cash awards, award-winning students will have a variety of other opportunities.

NSE’s Sterling Harper was one of 32 graduate students across the country to be awarded a Nuclear Energy University Programs Fellowship given by the US Department of Energy. Harper’s project focuses on modeling nuclear reactors. He is writing software that can be used to calculate how many neutrons of different energies are in a reactor and is designing tools to determine the reactor’s safety, failure modes, power potential, and radioactive waste production. Harper works with NSE Professors Benoit Forget and Kord Smith.

As an NEUP graduate fellow, Harper will receive $50,000 annually over the next three years in addition to a summer internship at a National Laboratory.

NSE undergraduates Luisa Kenausis, Sean Lowder, and Vivian Tran (course 22 and course 8) are among 59 undergraduates awarded scholarships in nuclear energy-related engineering and science programs at universities across the country. Kenausis has completed three UROPs with Professor Forget; Lowder will be spending this summer working with Professor Jacopo Buongiorno; and Tran has worked Professors Forget, Short, and Yildiz on four UROP projects. Undergraduates will each receive a $7,500 scholarship.

NSE graduate student Miaomiao Jin has won the award for the best poster presented at the 2015 CASL Annual Education Workshop.

Jin works with NSE Professor Short, in the meso-scale nuclear materials (MNM) group which focuses on microstructural level and engineering scale modeling and experiments. He works on the porous corrosion deposits on fuel rod surfaces, known as CRUD (an abbreviation for ‘Chalk River Unidentified Deposits’), in nuclear reactors. Jin’s work contributes the development of a mulitphysics model (MAMBA-BDM) to characterize the deposition and influences of CRUD on fuel rods.

The winning poster featured a study on film boiling and heat transfer regimes in CRUD. With the assumption of film boiling in CRUD at high heat fluxes, the study shows how heat transfer, fluid flow, and chemical reactions can be coupled and solved to characterize the distribution of several key variables including temperature. These measurements can in turn be used in subsequent calculations of cladding oxidation.

CASL is the US Department of Energy’s Consortium for Advanced Simulation of Light Water Reactors. It connects fundamental research and technology development through an integrated partnership of government, academia, and industry that extends across the nuclear energy enterprise.

The Department of Nuclear Science and Engineering and the student chapter of the American Nuclear Society hosted the annual awards dinner on on April 29, 2015. Meet the award winners.

NSE graduate student Jake Jurewicz has won the award for the best student paper submitted to the 10th International Topical Meeting on Nuclear Thermal Hydraulics, Operation and Safety (NUTHOS10). Jurewicz’s paper describes the detailed design of a spar-type platform for an offshore floating nuclear power plant.He presented the paper to an international audience at the conference in Okinawa, Japan on December 18th.

Jurewicz has been working closely with each member of the group over the last year and a half to fully integrate the design of the offshore platform with all of the nuclear systems and design constraints raised by the group members. His research, along with the rest of the OFNP group, is seeking to develop a new paradigm of safety and construction efficiency in nuclear plant design.