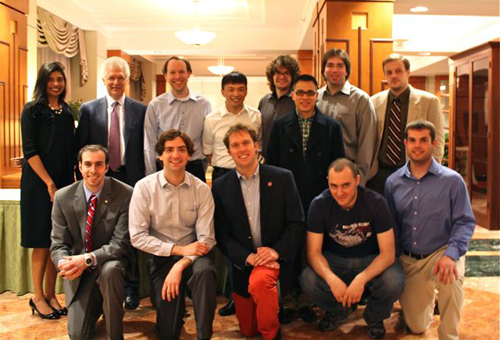 The Reinhold Rudenberg Memorial Prize is awarded by the School of Engineering for significant contributions to the advancement of energy conversion. This year the Rudenberg Memorial Prize was awarded to the group of graduate students in the Department of Nuclear Science and Engineering who created a widely-read technical blog on the accident at the Fukushima nuclear power plant. (the students of the MIT NSE Nuclear Information Hub).

The citation from the office of the Dean of Engineering reads in part:

“The students of the MIT NSE Nuclear Information Hub . . . met an urgent worldwide need for accurate, reliable scientific and engineering information about the situation at the Fukushima nuclear power plant in the weeks following the great Sendai earthquake and tsunami of March 2011.

At a time of great public confusion and anxiety, these students used their engineering knowledge to communicate important technical information clearly, objectively, and in a form understandable to the general public to more than one and a half million visitors to their website from around the world.

The work of these students demonstrates the importance of excellence in societal communication for the advancement of energy conversion, and they themselves have demonstrated technical leadership in the best tradition of MIT engineers.”