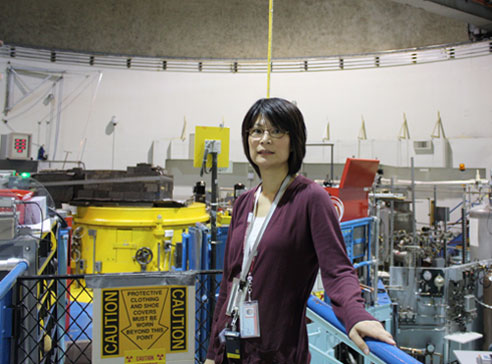 MIT's Research Reactor (MITR) plays a critical role not only in the education of MIT students, but on the national stage for advanced nuclear reactor fuel and materials research, according to Lin-wen Hu, the associate director of research development and utilization at the Nuclear Reactor Laboratory (NRL).

The U.S. Department of Energy (DOE) has chosen the NRL as the test site for converting from high enriched uranium to low enriched uranium fuel. "MITR will be the first reactor in the world to use this new fuel and to demonstrate that reactor performance can be maintained after fuel conversion," Hu said.

The MITR currently uses fuel that is 93 percent enriched, but the goal is to use uranium that is 20 percent enriched—requiring the reactor to fit five times as much uranium into the same space. DOE's National Nuclear Security Administration is currently running tests on this new high-density, low-enrichment fuel—a major inter-national priority to reduce proliferation risk.

Several MIT graduate students have been working on the core element design and licensing analysis to accommodate the change. The new design will retain the same outer geometry—the core is less than 15 inches wide and 2 feet deep—but the new fuel element will feature 18 plates per element, up from the existing 15 plates.

"We have students involved in reactor fuel design and safety analysis, working closely with DOE and National Laboratory staff," said Hu, adding that three to four graduate students a year have worked on the project over the past five years—gaining invaluable experience.

"MITR offers tremendous learning opportunities," noted Hu, who credits the hands-on experience she gained at the reactor with filling in holes in her study of nuclear engineering. "Just reading and studying doesn't give you the whole picture," said Hu, who received her PhD from MIT in 1996.

Working at the NRL as a graduate student also launched Hu on her career path. "I became passionate about maintaining the reactor as a teaching and research facility," said Hu, who is also a principal research scientist at the NRL.

While the MITR furthers MIT's academic mission—it's used in everything from an undergraduate lab course to graduate thesis research projects—the facility's research mission is equally important, Hu said. Earlier this year the NRL staff started to run three nuclear fuel and materials irradiation experiments simultaneously in the reactor core—a milestone reached for the first time since the reactor was commissioned in late 1950s. One of these experiments was undertaken as part of MITR's national role as a partner of the DOE's Advanced Test Reactor National Scientific User Facility: a test of new silicon carbide cladding for commercial nuclear reactor fuel rods.

Cladding—the casing which surrounds the nuclear fuel—is normally made of metal, but metal is susceptible to oxidation in water at high temperatures, a process that releases hydrogen (a huge problem at the Fukushima plant in Japan following the March 2011 tsunami). This has led to new interest in the use of advanced materials like silicon carbide. Subjecting advanced materials and fuel to high temperatures and pressures and intense radiation is a critical step before they can be qualified for use in nuclear reactors.

"Advanced materials and fuels need to be tested in research reactors before they can be used in commercial plants. There are so many things going on in a reactor environment, you simply cannot model it," Hu said. "The MITR is the only research reactor located on a university campus in the U.S. that can design and perform this type of sophisticated experiment."

MITR plays a critical role not only in the education of MIT students, but on the national stage for advanced nuclear reactor fuel and materials research.