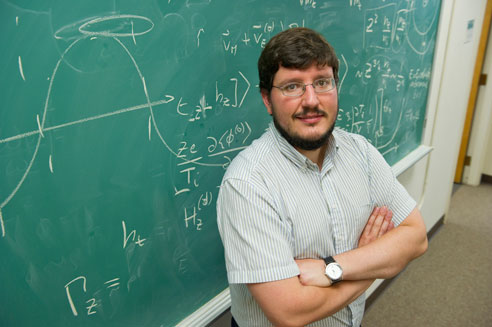 Felix Parra will conduct his research in the Theory Group of the Plasma Science and Fusion Center (PSFC), home to a tokamak fusion reactor (Alcator C-Mod) and a central node of international collaboration leading towards the scheduled 2019 startup of the large-scale ITER tokamak in France. The basic challenge: achieve the elusive “burning plasma,” a stable fusion reaction that can maintain its own extremely high temperature and create more energy than it takes in.

“Tokamaks should work quite well,” says Parra. “But they suffer very small-scale fluctuations in the plasma,” where hydrogen isotopes are heated and ionized to create the conditions for them to fuse and release thermonuclear energy. “While the particles should be well-confined, they tend to get pushed out, and the performance is not what we expect. The great thing is, we’ve been able to develop a simplified theory of plasma behavior, and in doing so, achieved the ability to simulate it with much less computing power.”

At the same time, new generations of computing tools are making it possible (and affordable) to run large numbers of simulations, “so we can explore physics that was hidden before,” notes Parra. “The question now is, can we use these new available tools to unravel the secrets of turbulence, and gain control over it.”

Parra earned his undergraduate degree in aeronautical engineering at Universidad Politecnica de Madrid in his native Spain, and his masters in aeronautics and astronautics at MIT. He earned his Ph.D. at the Institute’s Plasma Science and Fusion Center in 2009; his thesis (“Extension of Gyrokinetics to Transport Time Scales”) won the American Physical Society’s Marshall N. Rosenbluth Outstanding Doctoral Thesis Award. He is returning to MIT after a stint as EPSRC Postdoctoral Fellow in Theoretical Physics at Christ Church College, Oxford.

“Felix’s contributions to plasma turbulence theory are already well-known in the international magnetic fusion community,” commented NSE department head Richard K. Lester.  “He will be a dynamic addition to our outstanding program in fusion education and research.”

“MIT is an exciting place, and PSFC is one of the most exciting labs I’ve ever been to. I’m looking forward to being back with my old colleagues,” says Parra, who will teach courses in plasma turbulence and transport theory in NSE.

An early area of research will be intrinsic rotation in tokamaks. Traditionally, neutral atomic particles have been injected into tokamaks to “push” the plasma into rotation in the reactor’s toroidal (donut-shaped) chamber as part of the power-production process. But this injection requires energy; if the tokamak’s own electrical fields can be used to induce and control the rotation, it would represent another step towards the “big prize” of efficient fusion power generation. “MIT has spearheaded work in this area, and has all the tools; I’m very eager to work on it. If we could control the spontaneous rotation, we may be able to control turbulent losses,” notes Parra.

“We can explore physics that was hidden before. The question now is, can we use these new available tools to unravel the secrets of turbulence, and gain control over it.”