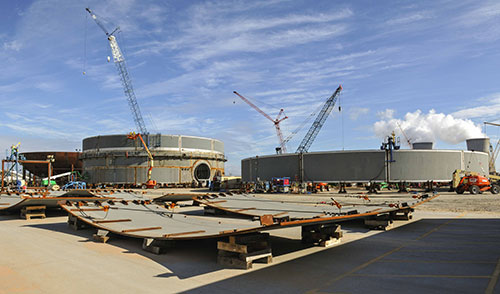 The first 10-day module of INLEP, NSE’s new International Nuclear Leadership Education Program, brought together leaders from emerging and established nuclear countries to discuss the challenges involved in building safe, secure, and successful nuclear energy programs. The inaugural INLEP class was made up of participants from Japan, Jordan, Kenya, Nigeria, Slovakia, UAE, and Vietnam, They heard presentations from 25 experts drawn from the international nuclear community as well as the MIT faculty. The first module covered the managerial, legal, economic and public policy aspects of nuclear leadership, as well as the fundamentals of nuclear engineering including neutronics and thermal hydraulics.

The opening lecture by Dhiaa Jamil, President of Duke Energy Nuclear, highlighted the ways in which nuclear plants represent a truly unique source of energy with unique institutional as well as technical complexities. Jamil stressed that for nuclear plant operators safety is not a priority, it is a value. Priorities change over time, but values do not. It is the responsibility of nuclear leaders to create and sustain a strong culture of safety.

Nuclear leadership was a recurring theme in the first module, reinforced by Bob Willard and Jim Ellis, the current and former CEOs of the Institute of Nuclear Power Operations (INPO), who each shared their experiences as to the importance of leadership for success during times of both crisis and tranquility.

To establish a new nuclear energy program, new institutions, new organizations and new cultures must be created. Critical decisions on the scale of the program, the pace of its development, and the selection of a reactor vendor must also be made. In an animated panel discussion, lecturers and participants discussed the prospects for large and small reactors, BWRs and PWRs, and criteria that ought to inform the selection of a reactor technology.

Many of the countries represented at INLEP have already taken early steps to build their workforces through the creation of new nuclear engineering departments at universities sending graduate and undergraduate students to international universities and forging regional and international partnerships to share experiences. The participants saw INLEP as a valuable addition to their human resource development programs.

The participants also gave brief presentations on the status of nuclear programs in their respective countries. In each case the rationale for the decision to develop nuclear energy was described, and the challenges faced and lessons being learned were debated in lively discussions.

The participants returned for the second INLEP module in November. This time the sessions were held at the Institute for Nuclear Power Operations (INPO) headquarters in Atlanta. The program began with the participants discussing the impact of the Fukushima Daiichi accident on the implementation of their nuclear energy programs. They also reflected on their roles as leaders of organizations that will build new nuclear energy systems.

The first half of the second module included a full program of lectures and case studies. Key themes in the second module — the management of nuclear plant construction projects and the management of used nuclear fuel — underscored the long duration of a commitment to nuclear power, a commitment which begins well before the first plant is built, and ends long after it is decommissioned.

In the second week, a visit to Plant Vogtle, where two PWRs are operating and two more are under construction, gave the participants an opportunity to see first hand how nuclear technology has evolved. Participants visited the control room of the operating reactor, and later visited the full-scale simulator for the AP1000 reactors under construction at the Vogtle site.

Over the following days the INLEP group visited a low-level waste disposal facility and a dry storage training facility, and the week of tours concluded with a visit to a fuel fabrication plant.

In the concluding discussions, participants and instructors alike emphasized the overriding importance of safety. Looking ahead, the inaugural INLEP class of 2013 noted that on returning to their home countries they would share what they had learned with their colleagues.

INLEP visited a nuclear component manufacturing facility in New Hampshire where reactor internals for the Summer and Vogtle plants in the US and the Barakah reactors in the UAE are being manufactured. INLEP participant Adnan Al Naqi, the Deputy Chief Program Officer of the Emirates Nuclear Energy Corporation, was pleased to witness the production of reactor internals for the APR 1400 reactors at Barakah, a project that he is overseeing.

Participants also attended a screening of “Pandora’s Promise”, a documentary film by the Oscar-nominated director Robert Stone. The film presents an argument in favor of nuclear energy through the personal stories of prominent environmental activists who changed their views on nuclear energy and now embrace it as one of the solutions for mitigating climate change.