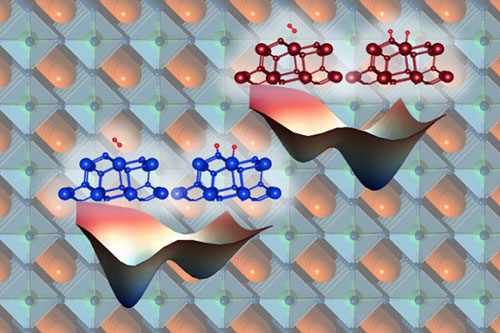 New field of “strain engineering” could open up areas of materials research with many potential applications.

In the ongoing search for new materials for fuel cells, batteries, photovoltaics, separation membranes, and electronic devices, one newer approach involves applying and managing stresses within known materials to give them dramatically different properties.

This development has been very exciting, says MIT associate professor of nuclear science and engineering Bilge Yildiz, one of the pioneers of this approach: “Traditionally, we make materials by changing compositions and structures, but we are now recognizing that strain is an additional parameter that we can change, instead of looking for new compositions.”

Yildiz, who authored a recent Materials Research Society Bulletin paper describing work in this field, explains that “even though we are dealing with small amounts of strain” — displacing atoms within a structure by only a few percent — “the effects can be exponential,” in some cases improving key reaction rates by tenfold or more.

While it may seem surprising that small displacements of atoms within a crystal lattice could have such large effects, Yildiz explains that in a normal, unstrained crystal structure, “atoms are at equilibrium positions. If you apply a strain, they are moved slightly from those equilibrium positions,” but their atomic bonds are not broken. However, the forces trying to pull the atoms back to their equilibrium positions can drastically alter how much energy is needed to get those atoms to take part in a chemical reaction.

But putting these theoretical improvements into practice in a device is a major challenge. Yildiz has focused on improving diffusion and reaction rates in metal oxides — which could affect how fast an energy storage or conversion device, such as a battery, works.

“Each of these reactions is associated with many energy barriers,” she says: They require that a certain energy threshold be reached before the desired reaction starts to work. In battery or fuel-cell electrodes, “accelerating those reactions means a lot for the performance of these devices,” she says.

For example, in some batteries and fuel cells, slow reaction rates in cathodes can be responsible for 50 percent of the entire system’s energy losses — meaning that eliminating or drastically reducing those losses could lead to almost a doubling of overall efficiency.

“Oxides are more complex,” she says, but offer a much larger array of potential material properties. For example, oxides including cobaltites and manganites, used as fuel-cell electrodes, have shown performance gains through stretching and straining.

The field of strained oxides is “quite promising, but not well established yet,” Yildiz says. Still, interest has grown enough that a symposium of last December’s annual meeting of the Materials Research Society was devoted to the topic; it was organized by Ju Li, the Battelle Energy Alliance Professor of Nuclear Science and Engineering and a professor of materials science and engineering at MIT.

Li explains that in addition to the chemical reaction rates that are the focus of Yildiz’s work, many other material properties can be altered by introducing tensile or shear elastic strain. For example, tuning the elastic strain can alter the band gap and color of materials; change phase-transition behavior; and even advance superconductivity, which could improve the efficiency of magnetic confinement fusion and electrical power transmission.

Li says that aspects of strain engineering have developed independently in fields including semiconductors, metal catalysts, functional oxides, and 2-D materials, but that researchers are beginning to realize that similar techniques can be applied in different areas. “We are comparing notes and bringing together a common toolkit,” he says.

Manos Mavrikakis, a professor of chemical and biological engineering at the University of Wisconsin at Madison who is not connected to the work at MIT, says that “strain is one of the most powerful handles for manipulating the energetics and speed of fundamental physical and chemical processes. Exploring the effects of strain on metal oxides, a large class of technologically important materials, is a very exciting research field, with a great potential for fundamental science and technological applications.”

“Strain is one of the most powerful handles for manipulating the energetics and speed of fundamental physical and chemical processes. Exploring the effects of strain on metal oxides, a large class of technologically important materials, is a very exciting research field, with a great potential for fundamental science and technological applications.”

In this illustration, the background shows a perovskite oxide structure, an example of the kinds of oxides Bilge Yildiz studies. By straining this material (as illustrated in the right-hand foreground image), the energy barrier to surface reactions is reduced. These energy barriers are shown by the three-dimensional graphs in the foreground images.