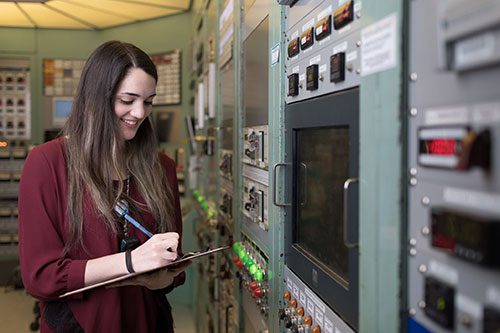 Sara Hauptman: Learning on the job

Before sophomore Sara Hauptman set foot in a nuclear science and engineering (NSE) class, she was learning to operate MIT’s nuclear reactor. “When I heard my first lectures describing reactor processes, I knew exactly what they were talking about because I’d already seen them firsthand,” says Sara Hauptman, who is pursuing an NSE major. She began training fall of freshman year, and received her operator’s license from the Nuclear Regulatory Commission in November 2016.

Hauptman is part of an elite crew — and one of a few undergraduates — to make it through an intensive year-long operator training regimen at the Institute’s Nuclear Reactor Laboratory (NRL), which serves as a major national facility to support research on advanced nuclear reactors. Sharing shifts with colleagues including MIT students and former U.S. Navy servicemen with nuclear reactor experience, Hauptman spends up to 24 hours per week monitoring the light-water cooled university reactor, which runs around the clock all year long, except for planned maintenance periods.

“The control room looks like something out of a sci-fi movie from the 1970s, which is when most of this stuff was built,” says Hauptman. “It is windowless, with bright fluorescent lights overhead, and there are screens and rows of blinking lights.”

What may strike some as claustrophobic suits Hauptman just fine. “You have to sit tight for four hours, and you don’t have a sense of time passing, which I got used to in training,” she says, “But I hang out in my dorm and watch Netflix for hours without moving, so I’m pretty proficient at sitting tight.”

For Hauptman, this assignment represents both an accomplishment and a surprising turn in her life. “Even now I sometimes can’t believe I work there,” she says. A native of Utah, Hauptman excelled in math and the sciences in high school, and was intent on pursuing chemical engineering in college. In search of a higher education curriculum that could provide both chemistry and Mandarin, her chosen minor, she selected MIT as her one out-of-state option. She was accepted early action.

After arriving on campus, a fortuitous episode nudged Hauptman off her planned academic path. She found herself in an NSE freshmen pre-orientation program instead of her first choice chemical engineering program.

“I knew nothing about the field coming in, but professors explained the different kinds of research possible in nuclear engineering, how it’s applied to medicine, how computational science is involved,” she says. “The presentation that stuck the most was on nuclear security and ways of working on nonproliferation, and I thought that sounded like something I’d like to do.”

But what made the greatest impression was a tour of the MIT reactor. “They mentioned the training program, and I thought, ‘What a crazy opportunity; who gets a chance like this?’” recalls Hauptman. “I decided to go for it.”

The biggest draw for her was a campus job offering hands-on experience. “I knew the training would be hard, but it would be extremely relevant to what I’d learn in classes, especially physics,” she says. “Once I obtained my license, there would be time to work on homework while sitting in the control room.”

In November of freshman year, while pursuing demanding first-year course requirements, Hauptman leapt into an operator training program more challenging than she had imagined: “I knew I’d have to understand radiation sources and dangers, but what surprised me was all the mechanical stuff you have to know, the ventilation, cooling, shielding systems and how they interact,” she says. “It turns out a reactor is kind of complicated.”

She digested a small book’s worth of mechanical and instrumentation procedures, the start-up and shutdown check list, and the process for achieving and sustaining reactor equilibrium. During a planned refueling shutdown, Hauptman was able to peer into the core. “I’d seen pictures of Cherenkov radiation—beta particles in water moving faster than the speed of light–—but I thought it couldn’t possibly look like that in reality,” she says. “When I saw the blue glow with my own eyes, it was probably the best day I ever had while at work.”

Since receiving her license, she’s had only one tense moment: Her first time alone in the control room, she says, “a relatively routine alarm went off and I jumped out of my seat.”

She also faced a major challenge: calibrating a new control rod for the reactor core. “It took almost four hours, and I had to keep the power level constant, monitoring the reactivity the whole time,” she says.

Today, Hauptman feels privileged to be NRC-licensed and qualified to assist with experiments, including a project developing a design for a new generation of reactors cooled by molten salt, and another involving irradiating ingots of silicon to improve the material’s efficiency as a semiconductor. She is also very enthusiastic about what she does. “I talk about work more than I should, and I like to give my friends tours,” she says.

Just launching into NSE coursework, Hauptman is contemplating an academic focus on nuclear security. “That could mean coming up with new technology to detect nuclear material on cargo ships or in airports,” she says. “I also find issues around nonproliferation really interesting and relevant — such as verifying that the other side has actually disassembled its warheads.”

Life after graduation remains distant but she has pinpointed one immediate goal: “I will be staying this summer to train for my supervisor’s license,” she says.