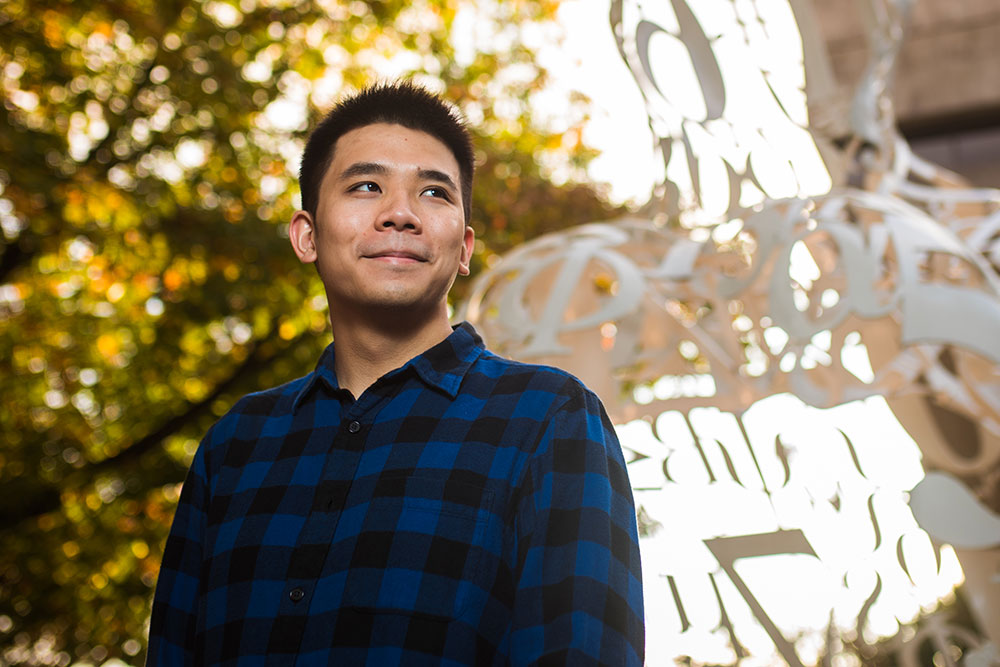 Thanh Nguyen is in the habit of breaking down barriers. Take languages, for instance: Nguyen, a third-year doctoral candidate in nuclear science and engineering (NSE), wanted “to connect with other people and cultures” for his work and social life, he says, so he learned Vietnamese, French, German, and Russian and is now taking an MIT course in Mandarin. But this drive to push past obstacles really comes to the fore in his research, where Nguyen is trying to crack the secrets of a new and burgeoning branch of physics.

“My dissertation focuses on neutron scattering on topological semimetals, which were only experimentally discovered in 2015,” he says. “They have very special properties, but because they are so novel, there’s a lot that’s unknown, and neutrons offer a unique perspective to probe their properties at a new level of clarity”

Topological materials don’t fit neatly into conventional categories of substances found in everyday life. They were first materialized in the 1980s but only becomes practical in mid 2000s with deepened understanding of topology, which concerns itself with geometric objects whose properties remain the same even when the objects undergo extreme deformation. Researchers experimentally discovered topological materials even more recently, using the tools of quantum physics.

Within this domain, topological semimetals, which share qualities of both metals and semiconductors, are of special interest to Nguyen. “They offer high levels of thermal and electric conductivity, and inherent robustness, which makes them very promising for applications in microelectronics, energy conversions and quantum computing,” he says.

Intrigued by the possibilities that might emerge from such “unconventional physics,” Nguyen is pursuing two related but distinct areas of research: “On the one hand, I’m trying to identify and then synthesize new, robust topological semimetals, and on the other, I want to detect fundamental new physics with neutrons and further design new devices.”

On a fast research track

Reaching these goals over the next few years might seem a tall order. But at MIT, Nguyen has seized every opportunity to master the specialized techniques required for conducting large-scale experiments with topological materials, and getting results. Guided by his advisor, Mingda Li, Norman C Rasmussen Assistant Professor and director of the Quantum Matter Group within NSE, Nguyen was able to dive into significant research even before he set foot on campus.

“The summer before I joined the group, Mingda sent me on a trip to Argonne National Laboratory for a very fun experiment that used synchrotron X-ray scattering to characterize topological materials,” recalls Nguyen. “Learning the techniques got me fascinated in the field, and I started to see my future.”

“These materials inherently withstand perturbations such as heat and disorders, and can conduct electricity with a level of robustness,” says Nguyen. “With robust properties like this, certain materials can conductivity electricity better than best metals, and in some circumstances superconductors — which is an improvement over current generation materials.”

This discovery opens the door to topological quantum computing. Current quantum computing systems, where the elemental units of calculation are qubits that perform superfast calculations, require superconducting materials that only function in extremely cold conditions. Fluctuations in heat can throw one of these systems out of whack.

“The properties inherent to materials such as TaP could form the basis of future qubits,” says Nguyen.  He envisions synthesizing TaP and other topological semimetals—a process involving the delicate cultivation of these crystalline structures — and then characterizing their structural and excitational properties with the help of neutron and x-ray beam technology, which probe these materials at the atomic level. This would enable him to identify and deploy the right materials for specific applications.

“My goal is to create programmable artificial structured topological materials, which can directly be applied as a quantum computer,” says Nguyen. “With infinitely better heat management, these quantum computing systems and devices could prove to be incredibly energy efficient.”

Physics for the environment

Energy efficiency and its benefits have long concerned Nguyen. A native of Montreal with an aptitude for math and physics and a concern for climate change, he devoted his final year of high school to environmental studies. “I worked on a Montreal initiative to reduce heat islands in the city by creating more urban parks,” he says. “Climate change mattered to me, and I wanted to make an impact.”

At McGill University, he majored in physics. “I became fascinated by problems in the field, but I also felt I could eventually apply what I learned to fulfill my goals of protecting the environment,” he says.

In both classes and research, Nguyen immersed himself in different domains of physics. He worked for two years in a high energy physics lab making detectors for neutrinos, part of a much larger collaboration seeking to verify the standard model. In the fall of his senior year at McGill, Nguyen’s interest gravitated toward condensed matter studies. “I really enjoyed the interplay between physics and chemistry in this area, and especially liked exploring questions in superconductivity, which seemed to have many important applications,” he says.  That spring, seeking to add useful skills to his research repertoire, he worked at Ontario’s Chalk River Laboratories, where he learned to characterize materials using neutron spectroscopies and other tools.

These academic and practical experiences served to propel Nguyen toward his current course of graduate study. “Mingda Li proposed an interesting research plan, and although I didn’t know much about topological materials, I knew they had recently been discovered, and I was excited to enter the field,” he says.

Man with a plan

Nguyen has mapped out the remaining years of his doctoral program, and they will prove demanding. “Topological semimetals are difficult to work with,” he says. “We don’t yet know the optimal conditions for synthesizing them, and we need to make these crystals, which are micrometers in scale, in quantities large enough to permit testing.”

With the right materials in hand he hopes to develop “a qubit structure that isn’t so vulnerable to perturbations, quickly advancing the field of quantum computing so that calculations that now take years might require just minutes or seconds,” he says. “Vastly higher computational speeds could have enormous impacts on problems like climate, or health, or finance that have important ramifications for society.” If his research on topological materials “benefits the planet or improves how people live,” says Nguyen, “I would be totally happy.”