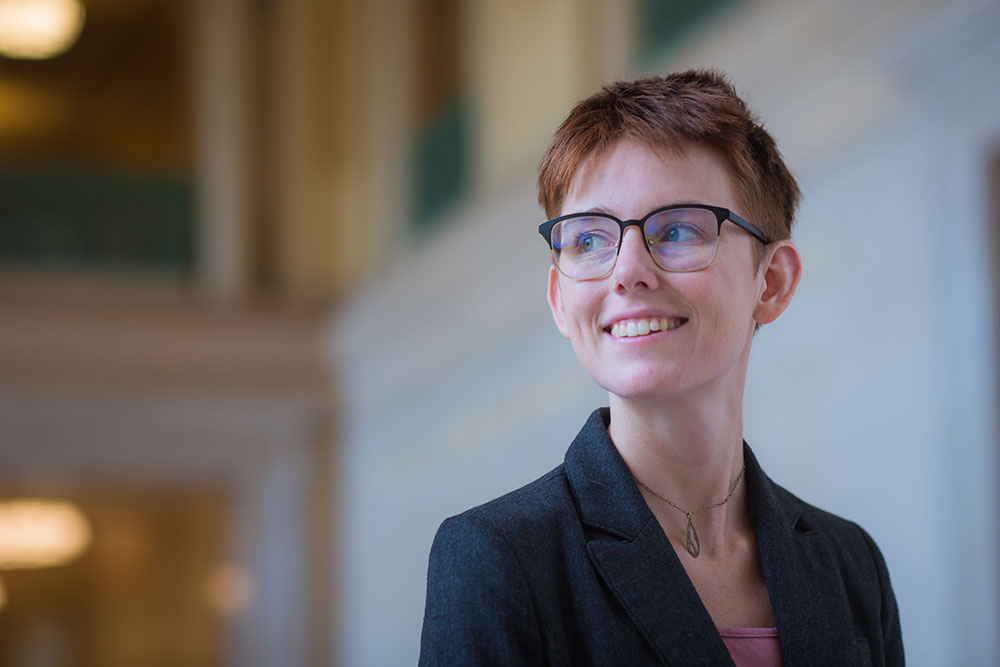 Amelia Trainer applied to MIT because she lost a bet.

As part of what the fourth year NSE doctoral student labels her “teenage rebellious phase,” Trainer was quite convinced she would just be wasting the application fee were she to submit an application. She wasn’t even “super sure” she wanted to go to college. But a high-school friend was convinced Trainer would get into a “top school” if she only applied. A bet followed: If Trainer lost, she would have to apply to MIT. Trainer lost–and is glad she did.

Growing up in Daytona Beach, Florida, good grades were Trainer’s thing. Seeing friends participate in inter-school math competitions, Trainer decided she would tag along and soon found she loved them. She remembers being adept at reading the room: If teams were especially struggling over a problem, Trainer figured the answer had to be something easy, like zero or 1. “The hardest problems would usually have the most goofball answers,” she laughs.

Her research, under the guidance of Prof. Benoit Forget in MIT NSE’s Computational Reactor Physics Group (CRPG), focuses on modeling complicated neutron behavior in reactors. Simulation helps forecast the behavior of reactors before millions of dollars sink into development of a potentially uneconomical unit. Using simulations, Trainer can see “where the neutrons are going, how much heat is being produced, and how much power the reactor can generate.” Her research forms the foundation for the next generation of nuclear power plants.

To simulate neutron behavior inside of a nuclear reactor, you first need to know how neutrons will interact with the various materials inside the system. These neutrons can have wildly different energies, thereby making them susceptible to different physical phenomena. For the entirety of her graduate studies, Trainer has been primarily interested in the physics regarding slow-moving neutrons and their scattering behavior.

When a slow neutron scatters off of a material, it can induce or cancel out molecular vibrations between the material’s atoms. The effect that material vibrations can have on neutron energies, and thereby on reactor behavior, has been heavily approximated over the years. Trainer is primarily interested in chipping away at these approximations by creating scattering data for materials that have historically been misrepresented and by exploring new techniques for preparing slow-neutron scattering data.

Trainer remembers waiting for a simulation to complete in the early days of the COVID-19 pandemic, when she discovered a way to predict neutron behavior with limited input data. Traditionally “people have to store large tables of what neutrons will do under specific circumstances,” she says. “I’m really happy about it because it’s this really cool method of sampling what your neutron does from very little information,” Trainer says.

As part of her research, Trainer often works closely with two software packages: OpenMC and NJOY. OpenMC is a Monte Carlo neutron transport simulation code that was developed in the CRPG and is used to simulate neutron behavior in reactor systems. NJOY is a nuclear data processing tool, and is used to create, augment, and prepare material data that is fed into tools like OpenMC. By editing both these codes to her specifications, Trainer is able to observe the effect that “upstream” material data has on the “downstream” reactor calculations. Through this, she hopes to identify additional problems: approximations that could lead to a noticeable misrepresentation of the physics.

A love of geometry and poetry

Trainer discovered the coolness of science as a child. Her mother, who cares for indoor plants and runs multiple greenhouses, and her father, a blacksmith and farrier, who explored materials science through his craft, were self-taught inspirations.

Trainer’s father urged his daughter to learn and pursue any topics that she found exciting and encouraged her to read poems from Calvin & Hobbes out loud when she struggled with a speech impediment in early childhood. Reading the same passages every day helped her memorize them. “The natural manifestation of that extended into [a love of] poetry,” Trainer says.

A love of poetry combined with Trainer’s propensity for fun led her to compose an ode to pi as part of an MIT-sponsored event for alumni. “I was really only in it for the cupcake,” she laughs. (Participants received an indulgent treat).

After being accepted at MIT, Trainer knew she wanted to study in a field which would take her skills at the levels they were at–“my math skills were pretty underdeveloped in the grand scheme of things,” she says. An open-house weekend at MIT, where she met with faculty from the Nuclear Science & Engineering department, and the opportunity to contribute to a discipline working toward clean energy, cemented Trainer’s decision to join NSE.

As a high schooler, Trainer won a scholarship to Embry-Riddle Aeronautical University to learn computer coding and knew computational physics might be more aligned with her interests. After she joined MIT as an undergraduate student in 2014, she realized that the CRPG, with its focus on coding and modeling, might be a good fit. Fortunately, a graduate student from Dr. Forget’s team welcomed Trainer’s enthusiasm for research even as an undergraduate freshman. She has stayed with the lab ever since.

Research internships at Los Alamos National Laboratory, the creators of NJOY, have furthered Trainer’s enthusiasm for modeling and computational physics. She met a Los Alamos scientist after he presented a talk at MIT and it snowballed into a collaboration where she could work on parts of the NJOY code. “It became a really cool collaboration which led me into a deep dive into physics and data preparation techniques, which was just so fulfilling,” Trainer says. As for what’s next, Trainer was awarded the Rickover fellowship in nuclear engineering by the the Department of Energy’s Naval Reactors Division and will join the program in Pittsburgh after she graduates.

For many years, Trainer’s cats, Jacques and Monster, have been a constant companion. “Neutrons, computers, and cats, that’s my personality,” she laughs. Work continues to fuel her passion. To borrow a favorite phrase from Spaceman Spiff, Trainer’s favorite Calvin avatar, Trainer’s approach to research has invariably been: “Another day, another mind-boggling adventure.”