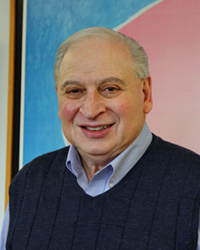 Fusion energy is a form of nuclear energy in which light elements, usually isotopes of hydrogen, are fused together generating a large release of energy. When produced in sufficient quantity, it is this energy that will ultimately be transformed into electricity for home and commercial usage.

Because fusion occurs at enormous temperatures (on the order of 100M K), the gaseous fuel of isotopes become fully ionized - it becomes plasma. A plasma behaves very differently from a neutral gas in that it is completely dominated by electromagnetic effects and gravity is negligible. Understanding the physics of plasmas has been one of the most exciting and fascinating challenges to the physics community for the past four decades, and many basic problems still remain unsolved.

Professor Freidberg's interests lie mainly in the area of theoretical plasma physics. The critical theoretical problems facing fusion involve macroscopic equilibrium and stability, heating, transport, and edge phenomena. Professor Freidberg has carried out research in each of these areas but is particularly interested in magnetohydrodynamics, a model that describes the gross equilibrium and stability properties of plasma. Specific problems involve both theoretical analysis and large-scale computation with the end goal being the discovery of optimized magnetic geometries that can confine high plasma pressures. The research topics of interest can be either basic (pushing the boundaries of our knowledge) or applied, supporting the experimental efforts at MIT's Plasma Science and Fusion Center (e.g., the Alcator C-Mod tokamak or the Levitated Dipole Experiment, LDX).

One of the main components in a fusion experiment is the magnet system that provides the magnetic fields necessary to confine the hot plasma. In a reactor the magnets will be large and probably represent the largest fraction of the total cost. Furthermore, the magnets will almost certainly be superconducting in order to avoid joule-heating losses that would arise in standard copper magnets.

Superconducting magnets actually become superconducting only at very low temperatures, approximately 10K. They normally operate at about 5 K. One structural safety concern occurs when a small perturbation in current or temperature causes a small local area of the magnet to return to its normal non- superconducting state. Under certain conditions, the heat generated in this local area causes neighboring sections of the magnet to go normal - in essence the initial normal zone propagates along the entire magnet causing it to "quench." The whole process takes only about two seconds and once a full quench occurs, there is usually irreversible damage to the magnet from overheating. It is thus of great interest and importance to understand the engineering science of quench propagation, a subject involving the simultaneous interaction of electrodynamics, thermodynamics, and thermal hydraulics - a great challenge for theorists. Currently Prof. Freidberg is examining problems related to the initiation of quench in rapidly ramped systems to understand the so-called "ramp rate limitation," an unfavorable phenomenon in which quench occurs at significantly lower currents than in slowly ramped systems. Also of interest are the theoretical analyses of various intuitive design modifications that hopefully improve magnet performance.