The Extreme Materials Environment of a Magnetic Fusion Reactor 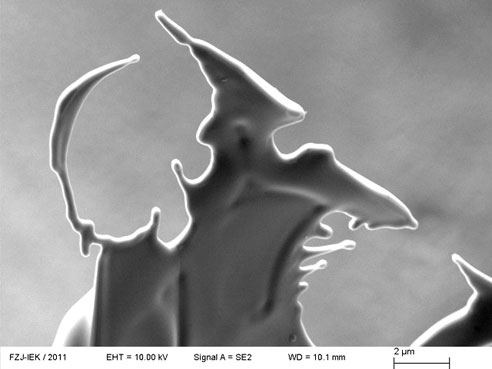 Eventual fusion reactors will make net energy due to the fusing of magnetically confined hydrogen isotopes of deuterium and tritium at about 100 million degrees C. This extreme temperature means the fuel is in the plasma state, like the interior of stars, and physical materials must be kept far away. One of the great scientific challenges of fusion is understanding how the fusion energy is eventually exhausted through the surrounding materials. This is being studied at MIT with a small-scale fusion reactor, Alcator C-Mod. It heats the plasma by using radio waves and the plasma is contained in a donut shaped magnetic field that is about 100,000 times the strength of Earth's magnetic field. Tungsten is one of the best candidate materials for fusion reactors: it carries away heat efficiently and it has the highest melting point (3400 C). Over the span of a year, Alcatorscientists tested a row of tungsten tiles embedded in the section of the wall called the divertor, the region where magnetic field lines are diverted for purposes of heat exhaust.

The good news was that most of the tungsten surfaces performed admirably. However at one location a mechanical problem occurred that made the tile misalign to the grazing magnetic field. As a result the tungsten surfaces received the full brunt of the plasma power along the magnetic field line, about 1 billion watts per square meter. Over a year's campaign, the tungsten was exposed one thousand times. The material damage and deformation is very complicated because it occurs at extremes of power flux, electric current and magnetic field. Close examination of this tungsten is helping MIT fusion scientists and students understand the implications of such damage for eventual fusion reactors.

The photographs in this collection were taken with a scanning electron microscope that resolves micron (1 millionth of a meter) features of the damaged tungsten. The melting tungsten leads to spherical like structures, probably due to surface tension "beading" the tungsten. Some of the features exhibit twisting, likely due to the magnetic forces or plasma pressure.

We hope you enjoy this small glimpse into the extreme world of plasma material interactions in fusion reactors.