The nuclear crisis and Japan's government 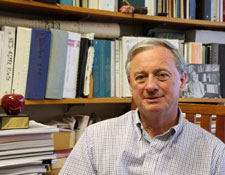 The response of Japan's government to its multiple unfolding disasters has been better than its past performance in moments of crisis, but the country's political leaders still have a long way to go to manage events well and win public confidence, MIT experts said in a public forum on Wednesday evening.

Professor Michael Golay, summarized the situation at the plants during Wednesday's forum, in part reprising information shared at a Tuesday discussion at MIT. Showing design drawings of the types of reactors at risk, Golay again emphasized the problems caused by the lack of power to the plant, which has led to major problems cooling the active fuel rods and spent fuel rods at Fukushima Daiichi.