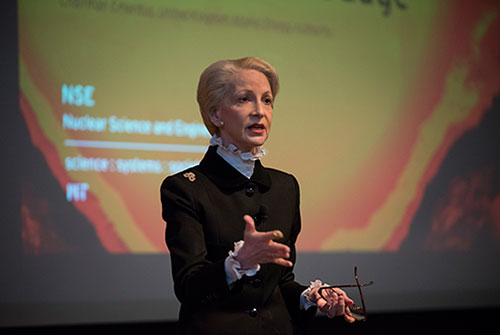 Lady Barbara Judge has a unique global perspective on nuclear power, combining top-level financial and legal experience with oversight and advisory roles in nuclear energy efforts in the UK, United Arab Emirates, Japan, and elsewhere. As MIT NSE’s twelfth David J. Rose Lecturer, she shared insights into the many challenges facing nations trying to start or maintain nuclear power programs, while noting that, even in a post-Fukushima world, fission has an essential role in “keeping the lights on for our families, our children, and the two billion people in the world who have no electricity at all. ”

Judge, who spent eight years as a director and then chair of the UK Atomic Energy Authority and now serves on Tokyo Electric Power Co.’s Nuclear Reform Monitoring Committee, joins a distinguished list of Rose Lecturers, including the IAEA’s Mohamed El Baradei and Hans Blix, and presidential science advisor John Holdren. The lectures honor nuclear engineering Prof. David J. Rose (1922–1985), a pioneer in controlled fusion as well as technology policy and assessment, and an early leader of interdisciplinary energy studies at MIT.

The need for multi-disciplinary thinking was clear in Judge’s talk, which cited eight separate areas that any country pursuing nuclear energy must address. These ranged from high-level planning and education to economics, waste management, and even the psychology of regulatory relationships, which inevitably vary from country to country.

The US, said Judge, provides strict “fences” that delineate what is allowable, while the British system tends to emphasize principles. “I think Americans need clear demarcation ... the British are more used to codes of conduct, so it’s horses for courses,” she explained. In pre-Fukushima Japan, she said, regulators and operators tended to be overly close, “so there was no competitive tension, which is what you need — a strong, respected regulator.” Working to remedy this with a more-independent structure is part of Judge’s mission on the TEPCO committee.

But above all, said Judge, “nuclear, first and foremost ... is a political issue. You can’t do anything about building power plants until you get the politics right.” And this is not a short-term matter. Judge described working with British Prime Minister Tony Blair on a strategic re-emphasis of nuclear power in the U.K., in which Blair’s Labour Party reached out to rival Conservatives to ensure consensus, and to avoid having a change in government bring about a costly change of course. But a subsequent election drove the Conservatives into a coalition with the small Liberal Democrat party, who had not been contacted by Labour (“a mistake,” said Judge). The problem was solved by the Conservatives allowing the Liberal Democrats to speak against, but not vote against, nuclear power.

Judge also described France’s political approach to nuclear power after the 1970s oil crises, which reinforced the desirability of domestically controlled energy. The French government offered small towns “package deals” that included a desired local project (a highway, hospital, etc.) plus a nuclear plant. “Soon, all the towns were bidding against each other,” she said, adding that surveys have shown that people living near nuclear plants tend to have very positive feelings about them. She also praised the French use of a standard reactor design, for easier construction, efficient transfer of personnel and knowledge, and simplified decommissioning. Another important point, said Judge, is the need for more-productive engagement with press and media, and for better pubic relations, particularly among well-educated women, who in many advanced economies are one of the most anti-nuclear demographic groups.

“If we’re going to get the public to understand the benefits of nuclear power, we have to talk to them,” she said, pointing to a power plant project in Abu Dhabi, where monthly town meetings encourage area residents to ask questions about nuclear power, radiation, and other concerns. (Judge also observed that working in a top-down political economy like Abu Dhabi can simplify many aspects of the nuclear power development process.)

Since Fukushima, said Judge, there has been little change in the overall number of nuclear power reactors at the construction, planning and consideration stages, largely because of growing interest in Asian nations and the Middle East. Each country has its own rationale for pursuing nuclear energy; Judge commented that education is an essential ingredient in helping them adopt it safely. “We have to get together as a global community to educate the leaders and the local populations,” she said. “MIT is at the forefront of that, and the world should be following what you’re doing.”

“We have to get together as a global community to educate the leaders and the local populations. MIT is at the forefront of that, and the world should be following what you’re doing.”