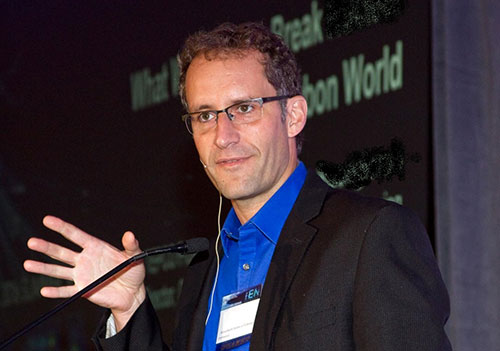 TEPCO Professor of Nuclear Science and Engineering, Jacopo Buongiorno, has been elected to the rank of Fellow within the American Nuclear Society (ANS). Buongiorno is recognized for contributions to “the advancement of nuclear science and technology through the years.” The appointment is the ANS’s highest membership grade to which only a select group of individuals have been elected.

Currently, Buongiorno’s research in nuclear and science and engineering is focused in four areas: the offshore floating nuclear power plant concept; the use of cutting edge experimental techniques to study the physics of two-phase flow and heat transfer phenomena, in particular nucleate boiling, Critical Heat Flux (CHF) and quenching heat transfer; exploring the separate effects of surface roughness, wettability and porosity on CHF and quenching heat transfer; and the synthesis and behavior of nanofluids.

Buongiorno graduated with a PhD from the Department of Nuclear Science and Engineering at MIT in 2000. He is Associate Department Head of Nuclear Science and Engineering and Director of the Center for Advanced Nuclear Energy Systems (CANES), one of eight  MIT Energy Initiative Low-Carbon Energy Centers. Buongiorno is a consultant for the nuclear industry in the area of reactor thermal-hydraulics, a member of the Accrediting Board of the National Academy of Nuclear Training, and a member of the Naval Studies Board for the National Academies of Sciences, Engineering, and Medicine. He is also the Director of  a new study — the Future of Nuclear Energy in a Carbon-Constrained World — whose goal is to conduct an objective assessment of the opportunities and challenges affecting the ability of nuclear energy technologies in meeting U.S. and global energy needs in a carbon-constrained world.

During his tenure at MIT, Buongiorno has been recognized for his “exemplary and sustained contributions to teaching” with a MacVicar Fellowship in 2014, and the Ruth and Joel Spira Award for Distinguished Teaching in 2006, 2011, and 2015.

Buongiorno is one of four scientists elected to the rank of Fellow in 2017. He was recognized at the ANS Annual Meeting held in San Francisco, CA on June 12.