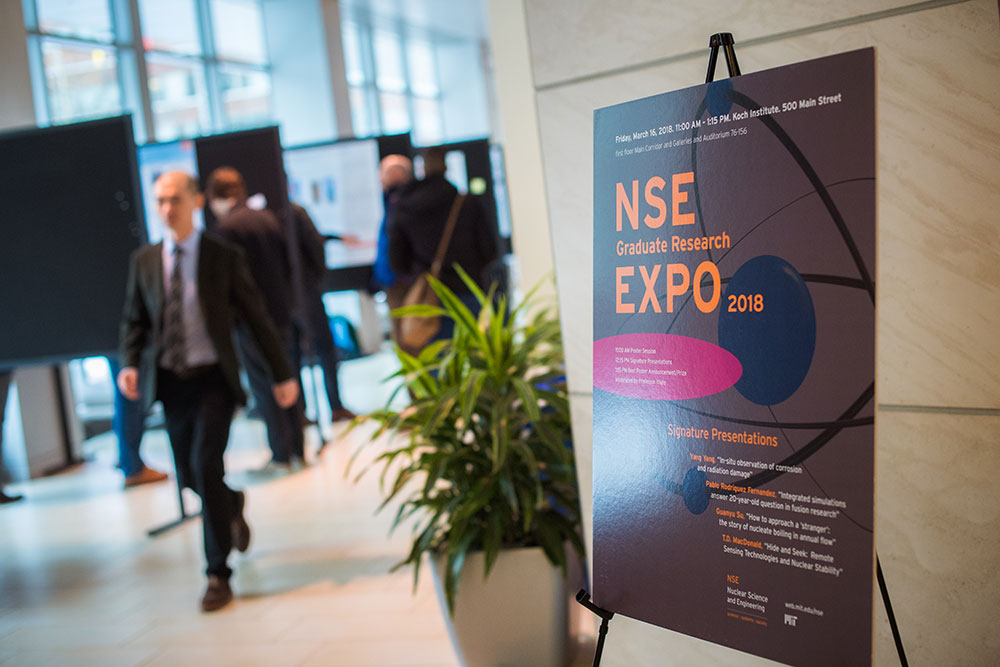 The MIT Department of Nuclear Science and Engineering’s Graduate Student Expo which traditionally kicks off the visiting weekend for prospective graduate students, was held on March 16. In addition to showcasing groundbreaking research from NSE’s various labs, the Expo also provides an opportunity for prospective students to learn about what projects they may be able to work on if they choose to come to MIT in the fall.

Muni Zhou for her poster entitled “Understanding the generation and evolution of cosmic magnetic fields”. Zhou is a second-year PhD student working with Professor Nuno Loureiro.

Jayson Vavrek from the Laboratory for Nuclear Security and Policy, for his poster entitled “Isotope-sensitive verification of nuclear warheads”. Vavrek is a fourth-year PhD student working with Professor Areg Danagoulian.

The Most Exciting Show on the Tip of Your Finger

Materials inside nuclear fission reactors experience some of the most extreme conditions on earth, combining high temperatures, corrosive environments, radiation damage, and mechanical deformation. Such demanding conditions will eventually cause most materials to fail, and in many cases limit the performance and lifetime of fission reactors. Yang Yang has made it his mission to observe the combined effects of these various conditions in real time. In his talk, titled “In-situ observation of corrosion and radiation damage,” Yang described the use of real time Transmission Electron Microscopy (TEM) to observe the microscopic damage caused by temperature, corrosion, radiation, and mechanical deformation as they occur. As just one example of the application of such a technique, Yang showed the results of mechanical deformation of aluminum in a corrosive oxygen environment. An amazing result of this work is that in some cases, the aluminum oxide that forms around the edge of the aluminum actually behaves almost like a liquid, flowing over the edge of the aluminum and combining into a crack-free protective layer. Such self-healing materials may help improve the safety and lifetime of future nuclear fission reactors. Watch video of the talk.

Solving the Mysteries of Fusion Plasmas

The super-hot gas used as the fuel inside fusion experiments, known as plasma, exhibits many strange behaviors, many of which aren’t yet entirely understood by physicists and engineers. One long-standing mystery involves injecting cold particles in to the edge of the plasma. In some conditions, this ‘cold pulse’ actually causes the center of the plasma to increase in temperature, as opposed to cooling off as one might expect. Such odd behavior has baffled fusion scientists for decades. Until now, that is. In his talk, titled “Integrated simulations answer 20-year-old question in fusion research,” Pablo Rodriguez-Fernandez described how newly developed plasma simulations are able to explain this mysterious cold pulse behavior, without invoking any enigmatic physical phenomenon. By properly accounting for exactly how the cold pulse changes the local density and temperature of the plasma, Rodriguez-Fernandez showed that the cold pulse reduces turbulence near the center of the plasma. This reduction in turbulence slows the transport of heat out of the plasma and thus increases the temperature of the central plasma for a short time. These simulations bring us one step closer to understanding the complicated physics of fusion plasmas.

Extreme Boiling: Not Your Simple Cup of Tea

When one thinks of extreme physics and advanced simulations, boiling water is not necessarily the first thing that comes to mind. Many of us boiled some water this morning to make a cup of tea or coffee. It turns out, however, that even the most familiar phenomena become quite complicated when they occur in extreme conditions.  In his talk, titled “How to approach a ‘stranger’: the story of nucleate boiling in annual flow,” Guanyu Su explores the details of how exactly water boils inside of a nuclear Boiling Water Reactor (BWR), and how this impacts the performance of the BWR. In particular, Su is interested in how much heat one can transfer from the outside of a circular pipe to a thin annular film of water on the inside, which is exactly what occurs inside of a BWR The more heat that one can transfer, the more energy that one can produce with the reactor. Su’s results, from a combination of new experiments and simulations, will influence the operation of current and future BWRs, increasing their efficiency and allowing them to produce more electricity. Watch video of the talk.

Hide and Seek on the Grandest of Scales

The first nuclear weapons were created more than 70 years ago, but have only been used twice in anger. One of the reasons for this remarkable stability is the threat of retaliation: if one state were to use their weapons against a second, the second state would almost certainly retaliate with their own nuclear weapons against the first. This stable situation, however, falls apart if one state could effectively destroy another’s nuclear arsenal before the second state could retaliate. T.D. MacDonald has dedicated his doctoral research to the study of this complicated interplay between technology and statesmanship. In his talk, titled “Hide and Seek: Remote Sensing Technologies and Nuclear Stability,” MacDonald explores one aspect of this nuclear equilibrium. One method of assuring that a state’s nuclear weapons survive a first strike, MacDonald described, is to place them on truck-based mobile launchers, so that another state cannot locate and destroy them. Recently, however, space-based radar has worried many states that others could track their truck-based launchers, thus eliminating the advantage of mobility. MacDonald described how the competing technologies of hiders and seekers play into the stability of a constantly evolving global equilibrium. Watch video of the talk.