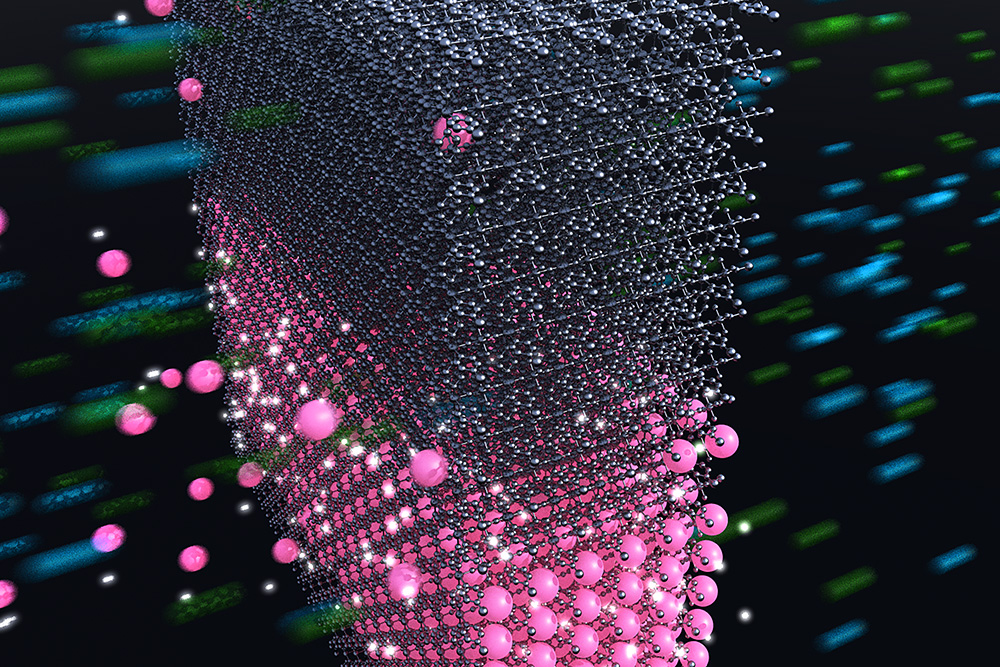 Nuclear energy provides about 20 percent of the US electricity supply, and over half of its carbon-free generating capacity.

Operations of commercial nuclear reactors produce small quantities of spent fuel, which in some countries is reprocessed to extract materials that can be re-cycled as fuel in other reactors. Key to the improvement of the economics of this fuel cycle is the capture of gaseous radioactive products of fission such as 85krypton.

Therefore, developing efficient technology to capture and secure 85krypton from the mix of effluent gases would represent a significant improvement in the management of used nuclear fuels. One promising avenue is the adsorption of gases into an advanced type of soft crystalline material, metal organic frameworks (MOFs), which have extremely high porosity and enormous internal surface area and can incorporate a vast array of organic and inorganic components.

Recently published research by a multidisciplinary group that includes members of MIT’s Department of Nuclear Science and Engineering (NSE) represents one of the first steps towards practical application of MOFs for nuclear fuel management, with novel findings on efficacy and radiation resistance, and an initial concept for implementation.

One fundamental challenge is that the mix of gases produced during fuel reprocessing is rich in oxygen and nitrogen, and existing methods tend to collect them as well as the part-per-million quantities of krypton that represent the highest risk. This reduces the purity of the collected 85Kr and increases the waste volume. Moreover, existing krypton extraction methods rely on costly and complex cryogenic processes.

The group’s study, published in the journal Nature Communications, evaluated a series of ultra-microporous MOFs with different metal centers including zinc, cobalt, nickel, and iron, and found that a copper-containing crystal, SIFSIX-Cu, showed good promise.

To harness its favorable combination of radiation stability and selective adsorption, while also minimizing the volume of waste, the team proposed a two-step treatment process, in which an initial bed of the material is used to adsorb xenon and carbon dioxide from the effluent gas mixture, after which the gas is transferred to a second bed which selectively adsorbs krypton but not nitrogen or oxygen.

“If one day we want to treat the spent fuels, which in the US are currently stored in pools and dry casks at the nuclear power plant sites, we need to handle the volatile radionuclides.” explains Ju Li, MIT’s Battelle Energy Alliance Professor of Nuclear Science and Engineering and Professor of Materials Science and Engineering. “Physisorption of krypton and xenon is a good approach, and we were very happy to collaborate with this large team on the MOF approach.”

MOFs have been seen as a possible solution for applications in many fields, but this research marks the first systematic study of their applicability in the nuclear sector, and the effectiveness of different metal centers on MOF radiation stability, notes Sameh K. Elsaidi, a research scientist at the US Department of Energy’s National Energy and Technology Laboratory and the paper’s lead author.

“There are already over 60,000 different MOFs, and more are being developed every day, so there are a lot to choose from,” says Elsaidi. “The selection of one for 85Kr separation during reprocessing is based on several essential criteria. During our long search for porous materials that can meet these criteria, we found that a class of microporous MOFs called SIFSIX-3-M can efficiently reduce the volume of nuclear waste by separating 85Kr in more pure form from the other non-radioactive gases. However, in order to be useful for practical separation of 85Kr, these materials must be resistant to radiation under reprocessing conditions.

“This is a first look at candidates that can meet the criteria. I feel very lucky to be working with Ju and [MIT NSE post-doc Ahmed Sami Helal] as we start to evaluate whether these materials can be used in the real world. This project was a very good example of how collaborative work can lead to better fundamental understanding, and there’s a lot down the road that we can do together,” adds Elsaidi.

Helal notes, “Studying the effect of high-energy ionizing radiation, including β-rays and γ-rays, on the stability of MOFs is a very important factor in determining whether the MOFs can be used for capture of fission gases from used fuel. This work is the first to investigate the radiolytic stability of MOFs at radiation doses relevant to practical Xe/Kr separation at fuel reprocessing plants.”

Developing a practical adsorption process is a complex task, requiring capabilities from multiple disciplines including chemical engineering, materials science, and nuclear engineering. The research leveraged several specialized Institute resources, including the MIT gamma irradiation facility (managed by the MIT Radiation Protection Program) and the High Voltage Research Laboratory, which was used for beta irradiation measurements with assistance from Mitchell Galanek of the MIT Office of Environment, Health & Safety.

Those efforts, in conjunction with X-ray diffraction studies and electronic structure modeling, “were fascinating and helped us learn a lot about MOFs and build our understanding of non-neutronic radiation resistance of this new class of materials,” says Li. “That could be useful in other applications in the future,” including detectors.