Nuclear Science and Engineering PhD student Clarice Aiello has been selected to receive a Schlumberger Foundation Faculty for the Future fellowship. Launched by the Schlumberger Foundation in 2004, the Faculty for the Future fellowship was established to support women role models for the next generation. The fellowships are awarded to women from developing and emerging economies who are preparing for overseas PhD or post-doctoral study in the physical sciences and related disciplines at top universities for their disciplines.

The long-term goal of the Program is to generate conditions that result in more women pursuing scientific disciplines. Grant recipients are therefore selected as much for their leadership capabilities as for their scientific talents, and they are expected to return to their home countries to continue their academic careers and inspire other young women.

At MIT Aiello is working with NSE Professor Paola Cappellaro toward achieving high-fidelity control of electronic and nuclear spins associated with the Nitrogen-Vacancy defect center in diamond. The goal of her research is to manipulate these spins using optical and microwave fields in order to use them as quantum bits for quantum information processing and precision measurements.

The Faculty for the Future community now stands at 194 women from 54 countries, and grows steadily each year

MIT graduate student and All-American javelin thrower Vladimir Sobes '11 was presented with the Elite 88 Award at the National Collegiate Athletic Association (NCAA) Division III Outdoor Track and Field Championship in Delaware, Ohio, on Wednesday, May 25. Sobes, who carried a perfect 5.0 grade-point average throughout his undergraduate career at MIT, joins sophomore Kyle Hannon as the Institute's 2011 winners of the Elite 88 Award, presented to the student-athletes with the highest cumulative grade-point averages participating in the finals for each of the NCAA's 88 championships. Hannon received the distinction at the Indoor Track and Field national meet. 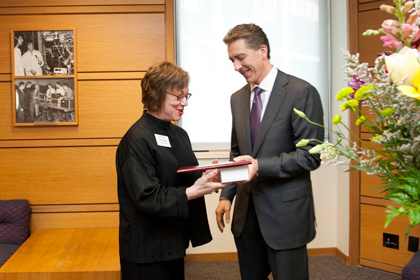 The Ellen J. Mandigo Award for Outstanding Service was presented at this year’s School of Engineering Infinite Mile Awards ceremony to Anita Kafka, assistant to the department head in the Department of Nuclear Science and Engineering. Ms. Kafka previously served for 14 years as the administrative coordinator of the MIT Industrial Performance Center.

The Ellen Mandigo Award recognizes staff who have demonstrated, over an extended period of time, the qualities Ms. Mandingo valued and possessed in great abundance during her long career at MIT: intelligence, skill, hard work, and dedication to the Institute. The Award carries a cash prize of $5000.

Professor Richard Lester, the current department head of Nuclear Science and Engineering and previously director of the IPC, commented that “Anita’s outstanding skills, unselfishness and generosity to her colleagues, exceptional attention to detail, can-do approach to whatever is put before her, warm and welcoming attitude towards everyone, and many years of total dedication to MIT, make her a richly deserving winner of the Ellen Mandigo Award. . . . . ‘Innovative’, ‘fearless in taking on new responsibilities’, and ‘totally reliable’ are just a few of the ways to describe Anita’s performance over the last 16 years.”  He added, “It is impossible to overstate the benefits that Anita has conferred on her colleagues simply by deploying her superb work ethic every day.”  NSE Administrative Officer Peter Brenton noted that “Anita’s genuine care for those under her charge shines through.”

Photo: Anita Kafka and Dean of the School of Engineering, Ian Waitz at the 2011 Awards ceremony.

The Department of Nuclear Science and Engineering and the student chapter of the American Nuclear Society hosted their Awards Dinner on May 6, 2011. The event attended by students, faculty and their guests was an evening of celebration and recognition of exceptional contribution and achievement by members of the Department.

The Reinhold Rudenberg Memorial Prize is awarded by the School of Engineering for significant contributions to the advancement of energy conversion. This year the Rudenberg Memorial Prize was awarded to the group of graduate students in the Department of Nuclear Science and Engineering who created a widely-read technical blog on the accident at the Fukushima nuclear power plant.  (the students of the MIT NSE Nuclear Information Hub). 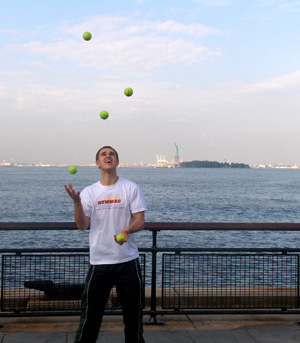 NSE graduate student Vladimir Sobes has been invited to membership in the Phi Beta Kappa Society — the nations oldest academic honor society. The Xi Chapter of Phi Beta Kappa, sheltered at MIT, voted to invite eighty-nine members of the Class of 2011 to membership in the Society in recognition of their excellent academic records and commitment to the objectives of a liberal education.

Founded in 1776, Phi Beta Kappa celebrates and advocates excellence in the liberal arts and sciences. There are currently campus chapters at 280 institutes of higher education across the United States. These campus chapters invite for induction the most outstanding ten percent of arts and sciences students at America’s leading colleges and universities. The Society sponsors activities to advance these studies — the humanities, the social sciences, and the natural sciences — in higher education.

Four NSE students are amongst the most recent recipients of Graduate Scholarships awarded by the American Nuclear Society each year. Lindsay Gilman was awarded the James F. Schumar Memorial Scholarship which is granted to students pursuing graduate studies in material science and technology for nuclear applications. Eric Forrest received an ANS Graduate Scholarship Award. Twenty-nine of these are given each year to full-time graduate students in a program leading to an advanced degree in nuclear science, nuclear engineering, or a nuclear-related field. Forrest was also the winner of the Superior Presentaton Award at the 2010 Sigma Xi Annual Meeting (story below). Paul Romano was awarded the Allan F. Henry/Paul A. Greebler Scholarship by the Reactor Physics Division of the ANS. This scholarship is awarded to students pursuing graduate studies in the field of reactor physics. Romano is also a Rickover Fellow (story below) and was awarded the Walter Meyer Scholarship by the ANS in 2010. Joseph Yurko received the ANS Pittsburgh Local Section Graduate Scholarship Awardfor a student entering the field of nuclear science and engineering.