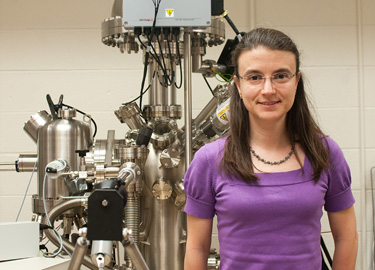 Better Fuel Cells and Reactors, Built From the Atomic Level

An especially exciting area of inquiry at the Laboratory for Electrochemical Interfaces is the use of lattice strain (a slight displacement of the atoms in a material’s lattice structure) to alter the properties and boost the performance of oxides subjected to high temperature and reactive environments both in fuel cells and in nuclear applications.

“The purpose is to assess how strain can alter the efficiency of devices like fuel cells, or the lifetime of structural materials in reactors. We investigate how critical properties, like diffusivity of oxide ions or surface reactivity, can be controlled by strain,” explains Bilge Yildiz, principal investigator at the Laboratory, which has received funding from an MIT Energy Initiative Grant, the Department of Energy’s Office of Basic Energy Sciences, and a Nuclear Regulatory Commission Faculty Development seed grant.

Yildiz cites the case of strained yttria-stabilized zirconia as a recent example. The oxide-based ceramic material is used in solid-oxide fuel cells as an electrolyte, and also in reactors as a protective native film for cladding on nuclear fuel. Yildiz and postdoctoral researcher Akihiro Kushima developed the first direct proof that a precisely controlled and directed amount of lattice strain could increase the material’s oxide ion conductivity by almost four orders of magnitude at 400 degrees K.

This property, the rate at which oxygen ions will diffuse through the material, is a critical engineering factor, notes Yildiz. “In fuel cells, you want the ions to diffuse quickly, so you’re looking for the fastest strain. When you want to prevent corrosion in a reactor, you want them to diffuse slowly. We’re studying different compositions for different functions.”

In addition to exploring the mechanistic effects of strain on material interfaces, the Laboratory is also probing surfaces of fuel cell electrodes and of passive films in corrosion in their reactive environments, using an array of newly developed analytical and metrology equipment. This includes a one-of-a-kind scanning tunneling electron microscope capable of structural and electronic interrogation at temperatures of 700 degrees C, coupled with an X-ray photoelectron spectrometer for chemical analysis.

By developing this molecular-level understanding of critical materials, Yildiz and her associates hope to enable new levels of control and planning for future generations of fuel cells and reactors. The findings could enable solid-oxide fuel cells to operate at lower temperatures for better economic viability, or help designers improve the corrosion resistance of structures in nuclear plants and make more accurate estimates of their lifetimes.

As Yildiz puts it, “We’re developing a smaller-scale understanding of how to control material properties, which hopefully will contribute to a larger-scale enhancement of energy technology performance.”

“We're developing a smaller-scale understanding of how to control material properties, which hopefully will contribute to a larger-scale enhancement of energy technology performance.”