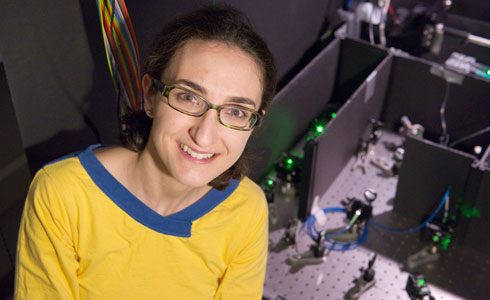 The kind of diamond Clarice Aiello values does not come in a dazzling pear or square cut, swaddled in black velvet on a counter at Tiffany’s. Instead, it exists as a millimeter-sized chunk on a sturdy table in a lab she built. What’s more, Aiello is not searching for perfection in her rock, but imperfection of a remarkable kind: a naturally occurring defect in the diamond’s lattice that, if manipulated properly, gives rise to quantum phenomena.

It is the mind-bending field of quantum mechanics that Brazilian-born Aiello has “wanted to understand more than any other thing.” A fifth year Nuclear Science and Engineering (NSE) graduate student, she developed an early fascination with the field after reading Richard Feynman’s classic Caltech lectures as a freshman in college. In spite of a professed weakness in math, she pursued this branch of physics through an international education that included the Ecole Polytechnique and the University of Cambridge.

Today, Aiello is exploring new dimensions of quantum mechanics through a research project with NSE Professor Paola Cappellaro. In 2009, they set out to investigate and exploit the so-called Nitrogen-Vacancy center defect in diamond (N-V center), a routine anomaly where a vacancy is adjacent to a substitutional nitrogen atom in the carbon lattice. “We started with nothing but an empty room and had to fill it with machines, screws, all the components that make our experiments possible,” says Aiello. Creating the lab was both arduous and gratifying, she says. “I’m not scared of building things from scratch anymore, but it takes a hell of a long time.”

Now equipped with a home-built confocal microscope, an oscillation-damping table, microwave sources, and lasers, Aiello explores some of the N-V center’s most intriguing attributes, such as its capacity to fluoresce when struck with light. But the real kicker, says Aiello, is that by carefully targeting the defect with photons, it is possible to create a quantum effect in a single electron. This is the “weird idea that an electron’s energy can be in both a 0 and a 1 state at the same time,” she explains— unlike the binary and mutually exclusive, 0 or 1, positions of an ordinary computer bit.

The quantum bit scientists generate in the N-V center may lead to a revolution in computing because “calculations are shown to speed up if your bit can co-exist in both energy states,” says Aiello. And there is another advantage: the quantum effect in diamond enabling this acceleration functions at room temperature. Aiello’s lab is currently focused on ways of controlling the environment around the defect via microwave and laser photons so that the electron lives longer than half a millisecond or so in its quantum state, potentially performing a greater number of calculations.

“Playing with the defect using photons of different wavelengths, you can sort of tell it how to behave,” says Aiello. “This is when you can start thinking about crazy things with real-life applications” — such as using the N-V defect to sense tiny magnetic fields in biological systems. “If you could functionalize diamonds, attach them to body cells, you could be doing fun stuff such as watching how synapses evolve or impulses work in the brain,” says Aiello. A nano-sized diamond probe with its capacity to measure spins— changes in single electrons — would be significantly more sensitive than current imaging techniques, which need to read the fields of millions of spins. While Aiello’s lab is “not on the practical end of the chain,” she is “creating clever methods for people who can develop a robust, practical device.”

There are flashes of satisfaction in the “long, long” research days: “You suddenly see a quantum signal, or manipulate a quantum object, and you think, this can’t be true, it’s so delicate yet it lives in our lab.” While Aiello hopes to continue work in quantum mechanics in the next phase of her academic career, she also revels in teaching and igniting a passion for science in others. “I go crazy if I only do research,” she says, so “in the ideal world, I will find some niche solving my humble quantum mechanics problems, mixing theory and experiment, and helping students become not just accomplished researchers, but better people.”

"If you could functionalize diamonds, attach them to body cells, you could be doing fun stuff such as watching how synapses evolve or impulses work in the brain." 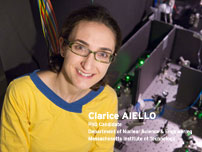 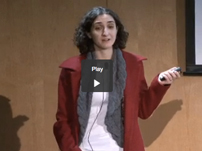