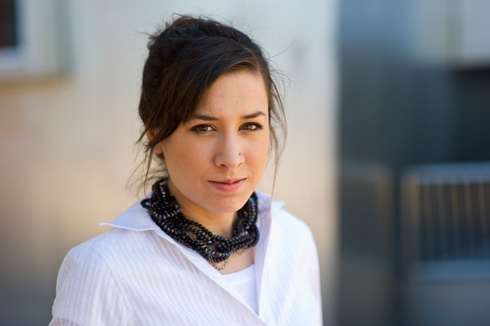 Sara Ferry: A new generation works to fulfill the promise of nuclear energy

The world of nuclear technology is in a generational transition. Many nuclear engineers and scientists were trained between the 1950s and 1970s, but entry to the field slowed in subsequent decades; NSE Ph.D. student Sara Ferry is part of a new cadre of technologists who are working to fulfill the promise of nuclear energy in a world very different from that of their predecessors.

Ferry, who earned her 2011 SB in Physics and Nuclear Science and Engineering with a minor in French, has made nuclear metallurgy a primary focus of her work. Her research at the Institute’s Uhlig Corrosion Laboratory involves “very broad analysis of atmospheric corrosion effects on stainless steel welds, with particular emphasis on stress corrosion cracking (SCC).”

The driver, explains Ferry, is the need for longer-than-anticipated on-site storage of used nuclear fuel, due to the difficulties of starting up a centralized national storage facility. “A lot of interim storage will have to be used for a lot longer than expected,” she explains. “The evidence is that it won’t be a huge problem, but research hasn’t been done into how stainless steel storage containers will behave over an extra 50 years beyond their initial 40-year design life. We know how SCC works, but we have to look at every on-site storage facility in the country – what are conditions like, what’s in the air, especially in particularly humid and coastal environments.”

While there are existing models for how the stainless canisters behave over time, they are general and have large uncertainties. Ferry says she and her colleagues will “develop a very rigorous probabilistic model that will, given a particular type of canister in a particular type of environment, be able to estimate with reduced uncertainty how long it will take for SCC to become an issue. It sounds straightforward, but a lot of issues come in.”

Among the advanced techniques used in their experimentation is newly developed atom-probe tomography (APT), which enables the team to go atom-by-atom through their material samples, gaining new physical insights and better understanding of corrosion and cracking mechanisms, which will help reduce uncertainty in lifetime predictions. Researchers in the Uhlig lab are also using APT techniques to explore the fundamental nature of environmental degradation in other materials used in nuclear power plants.

Long-term on-site storage is one example of how the nuclear power industry has had to adapt since its early days. Another is the need to win public trust for nuclear power in a world that is simultaneously threatened by carbon emissions and climate change and troubled by accidents at Three Mile Island, Chernobyl, and Fukushima.

“People miss the fact that nuclear engineers, especially in our generation, are in nuclear technology because of their environmentalism,” notes Ferry. “We believe it’s a very good option for right now, because it can be implemented right now. Wind and solar are wonderful parts of the energy picture, but no one thinks they will be enough. Conservation can be effective, but we can’t envision a future where we reduce electricity usage by 90 percent, which we’d have to do to cut carbon emissions to levels that the current administration advocates.”

“People miss the fact that nuclear engineers, especially in our generation, are in nuclear technology because of their environmentalism.”