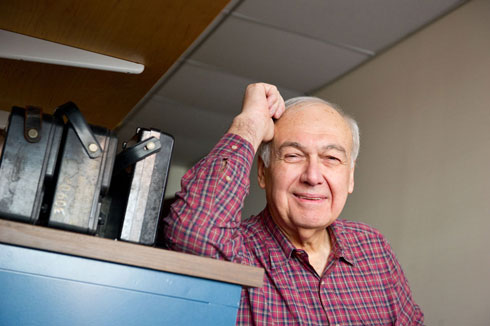 While virtually any scientific or engineering technology has the potential for misuse, nuclear technology is a special case, and security of materials and know-how has always been a priority in the nuclear community. In an age of rogue nations and violent sub-national organizations, the subject has even greater significance, and this is reflected in its important place in the curriculum of MIT’s Nuclear Science and Engineering Department.

The attention to nuclear security is part of the Department’s broader consideration of the interactions of nuclear technology with society as a whole. This is particularly important because fission reactors are emerging as the primary large-scale carbon-free energy generation method for the foreseeable future, notes Senior Research Scientist Richard Lanza.

“If you’re going to have nuclear power, then you’re going to have to deal with the issues of proliferation and safeguards,” he explains. “This is a complex-systems problem, and the sort of problem MIT has addressed in the past, because we can bring together a lot of pieces.”

From inside the Institute, these pieces include NSE faculty and members of other departments including Physics, Materials Science and Engineering and Political Science. Outside instructors hail from private companies and national laboratories, and government agencies like the Defense Intelligence Agency and the CIA; there is also collaboration on policy issues with Harvard’s Kennedy School of Government.

In a major supplement to funding from the Departments of Defense, Energy, and Homeland Security, NSE recently received a $2.4 million award from the Department of Energy’s National Nuclear Security Administration, under its Global Threat Reduction Initiative (GTRI). The Initiative is fostering development of a shared, five-course nuclear security curriculum at MIT, Pennsylvania State University and Texas A&M University; the materials will ultimately be promulgated to other universities.

Lanza co-teaches a course in Nuclear Non-Proliferation with Michael Hynes of Raytheon and Senior Lecturer Jacquelyn Yanch, covering a range of topics from the roots of nuclear weapons development to case studies of extremist groups (like Al-Qaeda and the Aum Shinrikyo cult) that have sought out nuclear materials and technologies on the black market. Political motivations are also explored, to help understand the nuclear aspirations of nations like Iran and North Korea.

Lanza explains that NSE leadership felt it made sense to study security in the department because “what we need is policy that’s more informed by technology, rather than the other way around. There are many protocols in place that are very prescriptive; the trouble is they were put into place 40 years ago.

“There’s also another aspect that’s changed — nuclear technology is now worldwide. The Non-Proliferation Treaty of 1970, our principal nonproliferation agreement, recognizes five countries as having the right to possess nuclear weapons (the US, USSR, United Kingdom, France and China). These countries pledged to reduce and eliminate their reliance on nuclear weapons and promote the development of civilian nuclear power programs in other countries. The world we live in now has two more declared nuclear countries, one undeclared country, and a host of subnational groups that are seeking nuclear capability. This is a very different world than 1970.”

This, says Lanza, is a primary driver behind new research into detection and analysis technologies, including the ability to track materials to their reactors of origin via their unique material “signatures,” and a reactor-monitoring collaboration with Lawrence Livermore National Laboratory focused on using anti-neutrinos to detect the creation of plutonium. “As my colleague Mike Hynes has said, what we want to do is move away from the Cold War concept of mutually assured destruction, and towards mutually assured detection.”

Lanza notes that there is intense interest among MIT students in security — over 50 people attended the first lecture in the nuclear non-proliferation course. “They understand that nuclear engineers are responsible for nuclear power, and if you do that, you have to be responsible for the consequences,” he says. “I tell them it’s their 30-year homework assignment — this isn’t something we can ignore.”

"What we need is policy that’s more informed by technology, rather than the other way around. There are many protocols in place that are very prescriptive; the trouble is they were put into place 40 years ago."