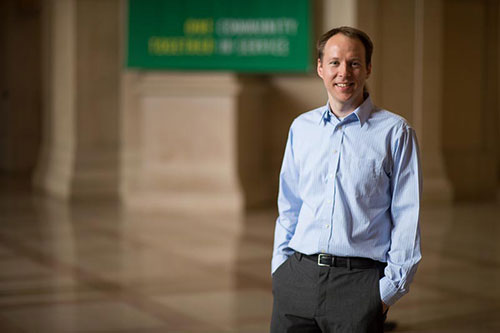 MIT’s Computational Reactor Physics Group (CRPG) supports leading-edge research across the Department of Nuclear Science and Engineering, providing new simulation and modeling capabilities for development and refinement of nuclear reactors. So why does the group’s co-leader, Associate Prof. Benoit Forget, counsel his researchers to study the early days of computing for clues on how to accomplish their goals?

Forget’s answer speaks to CRPG’s critical role in helping advance new-generation high-performance exascale computing technology, which is essential for complex projects like detailed design and safety assessments of new classes of reactors. The technology, which promises a thousand-fold increase in power over today’s fastest computers, is being assessed by the Department of Energy’s Center for Exascale Simulation of Advanced Reactors (CESAR), a consortium of five national laboratories and three universities in which NSE Prof. Kord Smith, co-leader of CRPG, serves as chief scientist.

Unlike most supercomputer programs, in which hardware development has preceded software, CESAR (led by Argonne National Laboratory) is using a collaborative parallel approach that is expected to make exascale computing practical for complete reactor simulation by 2019. Teams led by Smith and Forget work closely with hardware designers as they develop code for machines that will use massive arrays of central processing units (CPUs) augmented by graphics processing units (GPUs).

“For the amount of processing power, GPUs are very cheap. One video card might equal tens to hundreds of desktops,” explains Forget. “The tradeoff is that there’s very little memory for each processor, so different programming strategies are required. It makes for a very interesting project because the architecture is so different.”

In the grand tradition of engineering, old solutions sometimes shed light on new problems. “In the early days of computing, programmers were limited in every aspect,” says Forget. “Now we’re limited by network communication, memory, pretty much everything except the processor. So we’re digging through old papers and code to understand the clever solutions they found, and extending that knowledge to overcome our own limitations and generate new ideas to make this work.”

A foundational element of CESAR is the CRPG’s OpenMC Monte Carlo simulator code, which provides uniquely powerful high-fidelity stochastic modeling of neutron transport physics. NSE graduate students and OpenMC developers Paul Romano, Bryan Herman and Nick Horelik recently achieved a milestone by demonstrating that the code retains its efficiency during scale-up to hundreds of thousands of cores, a central concern in massively parallel computing. OpenMC had its first official release in December 2012.

OpenMC is also essential to another major collaboration of national labs and universities, the Energy Innovation Hub known as the Consortium for Advanced Simulation of Light Water Reactors (CASL), which is using the code to boost simulation efficiency without sacrificing accuracy, as part of a drive to improve reactor design and performance analysis.

On another front, the CRPG recently launched an effort to create a new international standard benchmark for evaluating and validating reactor simulations. The BEAVRS project leverages a rare set of full design and operational measurement data for the first two cycles of an operating power-plant reactor. The information (obtained by Kord Smith, an international leader in reactor modeling for three decades) is being adapted and made available to help developers worldwide on the group’s website

CRPG’s extensive interaction with the world’s most advanced nuclear energy organizations provides funding and important collaboration opportunities, and also enhances NSE’s educational mission by allowing students to tackle meaningful problems as they learn. Forget notes that, in line with this philosophy, about half the CRPG’s 20 grad students have obtained their own funding through competitive fellowships, including four prestigious Rickover Fellowships from the Department of Energy’s Naval Reactors Division. In addition, many UROP projects allow undergrads to conduct potentially publishable research.

Forget credits NSE’s students with driving the department towards creating this environment. “We’re trying to reinvent the field of reactor physics within the department; without the students pushing, nothing would change,” he says. “We have a very good group now, a big group but it’s a lot of fun to manage. We’re getting more attention externally, and NSE’s pool of incoming students gets more focused and driven each year — and much more oriented towards the CRPG as well.”

Forget credits NSE’s students with driving the department towards creating this environment. “We’re trying to reinvent the field of reactor physics within the department; without the students pushing, nothing would change.”