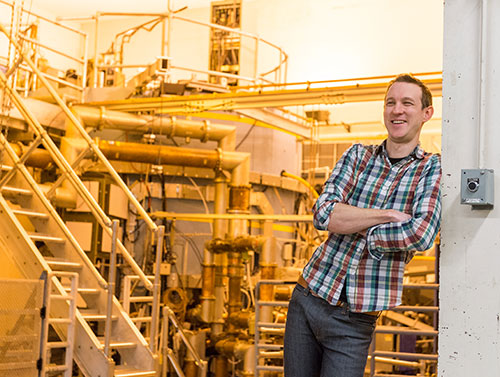 As an undergraduate engineering student, Zach Hartwig was introduced to the methods, procedures and practices that form an engineer’s toolkit. But, he recalls, his real interest was in “the principles the tools were built on, the fundamental physics that lay behind them.” So he switched majors and became a physicist, spending the next few years working in particle physics before joining the MIT NSE doctoral program.

Working at NSE’s Plasma Science and Fusion Center (PSFC), Hartwig has led the development of a groundbreaking materials diagnostic system that will help advance nuclear fusion as a practical energy source. And in the process, he has cultivated his true passion — “a mixture of nuclear physics and materials science with a bit of engineering thrown in.”

The work exemplifies NSE's increasing focus on interdisciplinary projects that support worldwide development of commercial fusion power plants utilizing tokamak reactors, like PSFC’s Alcator C-Mod. Tokamaks have made huge strides in functionality, successfully using magnetic fields to confine plasmas where lighter elements fuse into heavier ones, as they do in the core of stars, at temperatures of up to 100 million degrees C.

One important area of inquiry is the interaction between the confined plasma and the materials inside the tokamak's high-vacuum chamber. “The plasma and the chamber walls are a coupled system,” explains Hartwig. “C-Mod’s wall tiles and other plasma-facing components are made from robust refractory metals, like molybdenum, but we’re pushing their material limits by exposing them to enormous heat, charged-particle, and neutron fluxes that can cause severe surface modifications.”

Understanding how these components behave during ongoing reactor operation is intimately tied to several grand challenges still facing fusion — maintaining and controlling steady-state burning plasmas, mitigating deleterious effects of plasma-material interactions, and minimizing required maintenance. But until now, it has been effectively impossible to make routine, comprehensive measurements of plasma-facing materials in the hostile and inaccessible environment of a tokamak chamber.

Hartwig’s five-year project, conceived by NSE Professor Dennis Whyte and executed with help from nearly 100 NSE scientists, engineers, machinists, and students, solves the problem by directing a beam of deuterons (particles comprised of one proton and one neutron) from a linear accelerator into the tokamak, where it can be magnetically steered to strike any desired point.

The deuterons prompt nuclear reactions with the component material, generating high-energy neutrons and gamma rays, which can be measured by specially positioned detectors near the reactor chamber. “That tells us an enormous amount about the surface they came from, and lets us reconstruct surface properties we’re interested in,” explains Hartwig, “Nobody’s ever looked at these things so comprehensively inside the vacuum vessel.”

While Hartwig cautions that the diagnostic hardware and its associated computational modeling component must still fully prove themselves, the technology has the potential to become standard equipment for magnetic-confinement systems worldwide. It’s a vindication for Whyte’s vision, and for the diverse group of skilled contributors.

“Until this project, I hadn’t really appreciated what it means to be part of a cohesive team, the synergy. It’s impressive,” says Hartwig.

Hartwig supplements his research with substantial work in fusion-related outreach and communications. In addition to giving tours and talks at the PSFC, he has developed an overview presentation covering technical, economic, environmental, and safety aspects of fusion, delivering it to high-school students, university energy and business groups, and other audiences.

He also organized a 2012 trip for 11 NSE fusion students to Washington, DC, where they met with 30 House and Senate offices. On the agenda: the need to maintain a world-leading domestic fusion energy research program amidst tightening federal budgets and increased U.S. commitments to international fusion experiments. In this environment, says Hartwig, scientists must actively communicate the value of their work to the public and policymakers and make the case for ongoing funding.

“It’s increasingly important for scientists to understand the policy environment,” notes Hartwig, who is considering service as a science advisor in government post-doctorate. “Policymakers rarely meet young scientists. If you show up, tell them about your work and why it's important, and thank them for supporting it, that personal connection makes quite a big impact.”

“It’s increasingly important for scientists to understand the policy environment ... Policymakers rarely meet young scientists. If you show up, tell them about your work and why it’s important, and thank them for supporting it, that personal connection makes quite a big impact.”