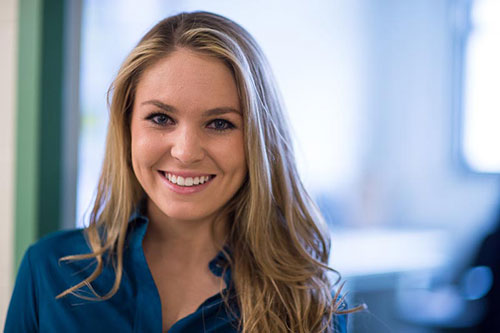 Whether soloing on tenor saxophone in a jazz band, souping up a racing coupe, or serving as the lone woman operator at a nuclear power plant, Rosemary Sugrue seizes opportunities to stretch herself and learn. This second-year graduate student, who says she has always “enjoyed problem-solving, critical thinking and mechanical things,” arrived at MIT as a freshman in 2007 restless to explore new domains.

All it took was one class in Course 22, and Sugrue leapt, saying, “I declared nuclear; I was sold on it.” This was the start of a long-term commitment to a discipline that offers a wealth of exciting challenges for her. “I am passionate about doing research in this field, helping the broader community understand the continued need for nuclear power, and recruiting other students to work in the field,” she says.

Sugrue’s current research focus dates back to her sophomore year, when she became intrigued by experiments in Professor Jacopo Buongiorno’s lab that explored thermal hydraulics in nuclear reactors. An invitation to participate in these studies through MIT’s Undergraduate Research Opportunity Program (UROP) proved a turning point for her. “I’d never known that research could be so exciting, and the experience changed my life,” she states.

Sugrue committed to a five-year combined undergraduate and master’s program in nuclear engineering. While tackling regular course requirements, she spent as many hours in the lab as she could, engaged in detailed examination of the boiling process inside a flow loop, an experimental device used to simulate the way a pressurized water nuclear reactor heats water to produce energy.

Using a high-speed camera shooting 6000 frames per second, Sugrue investigated the ways bubbles departed off a heated surface inside the loop, measuring their size and departure characteristics. She focused on specific nucleation sites, “those distinct spots,” explains Sugrue, “where streams of bubbles form.” Altering different parameters such as fluid flow rate as well as the fluid’s temperature and pressure, Sugrue could study the resulting behavior and size of these bubbles.

The conditions inside a flow loop are a good approximation of the scene inside a reactor core, where bubbles really matter. The sound operation of a nuclear reactor depends in large part on controlling how coolant fluid heats up under pressure, and this means maintaining nucleate boiling — that steady, predictable stream of bubbles, says Sugrue. Without this, a plant might “go from incredibly efficient heat transfer to critical heat flux — a boiling crisis — ultimately resulting in fuel failure.” Sugrue aims to produce better models for subcooled nucleate boiling, which might someday enable operators of nuclear reactors to turn up the heat, increasing their energy output without jeopardizing safety.

Determined to “experience as much as I could within the nuclear energy field,” Sugrue pursued challenging summer work as well: She donned a pink hard hat for a job in operations at the Turkey Point nuclear plant near Miami, and the next two summers she interned at the Nuclear Regulatory Commission (NRC), where she focused on probabilistic risk assessment. Sugrue developed a model to predict the amount of time it would take before a reactor core loses a significant amount of its coolant water after an accident, which was intended to help the NRC test assumptions by utility companies about their safety standards.

Sugrue is sensitive to public concerns about the risks of nuclear power. Following Japan’s 2011 nuclear accident, she published a paper, “Fukushima and the Bogey-Man,” in the MIT journal Angles, taking a measured look at radiation danger following nuclear accidents.

These days, Sugrue is mainly preoccupied with broadening her research on nucleate boiling. With evidence based on long hours of analyzing videotape footage of bubbles, Sugrue suggests that prevailing models of boiling inside pressurized water reactors contain significant errors, leaving utilities dependent on “outdated and inaccurate” information. Sugrue’s work, which she hopes to refine through computational fluid dynamics modeling in the course of her dissertation, may lead to a new view of ‘best practices’ in safety and efficiency for current and future generations of nuclear reactors.

While life after earning her Ph.D. still seems distant, Sugrue says she “hasn’t crossed anything off the list yet” in terms of professional plans. “I am still very much open-eyed, set on staying in nuclear energy and safety, and also determined to convince others to join the challenge of improving our energy portfolio,” she says.

“I am passionate about doing research in this field, helping the broader community understand the continued need for nuclear power, and recruiting other students to work in the field”