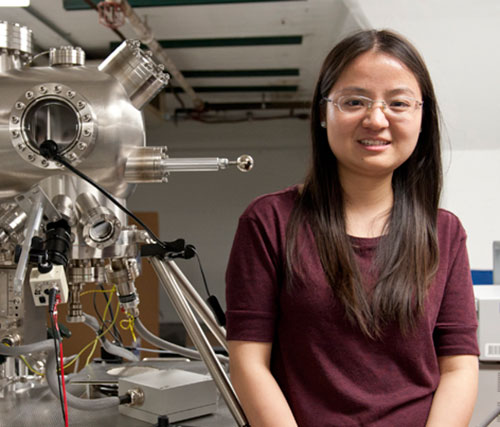 Doctoral candidate Yan Chen wants to improve the world. She doesn’t say this directly, but her five years of research on catalytic surfaces for use in high-temperature fuel cells say it for her. Her work has the potential to create efficient new energy solutions to help curb the world’s appetite for carbon-based fuels.

“My objective is to contribute to building an energy landscape including more renewable and clean resources, which is just what is needed the most in China right now,” said Chen, who decided to study nuclear science and engineering because it offers one solution to her native country’s energy needs. China is ramping up its clean energy industry, and she hopes her research will contribute.

Earlier this year, Chen received the Chinese Government Award for Outstanding Self-Financed Students Abroad. In April, she was named a Schlumberger Foundation Faculty for the Future postdoctoral fellow. The fellowship will allow her to continue her research at MIT after graduation in June.

Electrochemical energy conversion and storage systems, such as fuel cells, will play an essential role in integrating new energy sources like nuclear, solar and wind, Chen said, but their implementation requires new materials to make them cheaper and more efficient.

Fuel cells produce electricity from hydrogen or hydrocarbon fuels through oxidation. The solid oxide fuel cells Chen studies are efficient, relatively inexpensive and work with a number of different fuels, but they have a major disadvantage: they currently require working temperatures higher than 800 degrees Celsius.

Chen and her research advisor Professor Bilge Yildiz have been experimenting with a fuel cell cathode (one of two electrodes needed for a fuel cell) that shows remarkable catalytic capability. It is a heterostructure composed of two oxides having different crystal structures. In order to understand how it works, Chen and Yildiz designed a laminate model system and sliced through it at a dramatic angle, exposing relatively large sections of the interfaces exposed during catalysis. They discovered that the two oxides were sharing their best qualities. One is a superb electron source and the other exchanges oxygen quickly; the layers’ proximity creates a symbiosis where one borrows electrons from the other, increasing the material’s overall catalytic function.

Chen has long been interested in the physical nature of materials. She began excelling in physics during high school, and won the Physics Olympics for Guizhou province, an honor that brought automatic admission to Peking University a year early. This was especially good, she said half-jokingly, because she didn’t have to take the entrance exams.

At Peking University — a 32-hour train ride from her hometown — she earned bachelor’s degrees in both physics and statistics, and began her physics research in earnest in the master’s program, bombarding materials with ions to see the effect on their surface properties.

She came to MIT for doctoral study in 2009. “The pressure is greater than at some other universities, but the people here take care of each other,” she said. She was a member of the 2012 MIT women’s table tennis team that qualified for the national championship tournament in Dallas. “We were 11th out of 12 teams, so at least we beat one team at the championships,” she said modestly.

But her primary focus, of course, has been her studies and her research in Yildiz’ lab, where she helped design the experimental systems for fuel cell research. One such system involves a scanning tunneling microscope encased in an ultra-high vacuum chamber that allows Chen to see the ephemeral changes in a material’s surface properties at very high temperatures in an oxygen-rich environment. The real-time experiments she designed were essential; once the material cools down, the surface properties go back to their original state.

This and other findings from Chen’s thesis projects are helping engineers design new high-performance electrodes for fuel cells that operate at reduced temperatures, an essential step toward her goal of creating new clean energy solutions for the 21st century.

Chen’s work has the potential to create efficient new energy solutions to help curb the world’s appetite for carbon-based fuels.