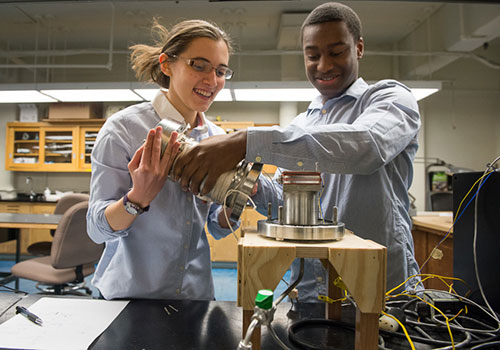 What do MIT freshmen Pavlina Karafillis and Rasheed Auguste like about their work in the Short Lab, NSE Assistant Professor Mike Short’s materials research group?

That spirit has enabled both Karafillis and Auguste to thrive in active roles at the Short Lab, which conducts groundbreaking research into materials performance in aggressive, corrosive, and radiation environments. Through MIT’s Undergraduate Research Opportunities Program (UROP), both are helping to develop better understanding and control of a problem that has long plagued fuel rods in fission reactors — the formation of deposits known as CRUD (for Chalk River Unidentified Deposits, after the Canadian power plant where they were first documented). The deposits interfere with cooling, and can reduce a power plant’s economic efficiency by requiring early replacement of fuel rods.

Auguste is helping to build the Lab’s CRUD Loop, a new experimental facility that will, for the first time, make it possible for researchers to study the growth and behavior of CRUD at pressures and temperatures comparable to those found in operating reactors. Meanwhile, Karafillis is participating in experiments that explore the surface interactions between fuel rod surfaces and the initial CRUD deposits, to gain better understanding of the growth process, and how it might be reduced or even modified in advantageous ways.

“One of my favorite things is talking to people in the lab, hearing them describe a problem they’re having, and then working with them to fix it,” notes Karafillis. “You learn random little things you’d never get in a textbook, bits of information that are immensely valuable.” She’s also discovered the pleasure of on-the-fly engineering — “a couple of weeks ago, someone was complaining about a piece not fitting into the front panel of a control box; I grabbed a Dremel tool, and had the hole opened up in 10 minutes. It was great!”

For his part, Short calls both students “ideal UROPs” with all-important self-motivational ability. “They both have a ton of energy. I've seen them in the lab on their own at odd times, when I wouldn't have expected any students to be around,” he says. “They don't need to be told what to do — they think ahead, learn on their own, and anticipate where we need to go next.”

Both students had MIT experience during high school. Karafillis, a native of Winchester, Mass., participated in a Sea Grant Ocean Science Internship program on the Boston Harbor Islands, and also completed two internships at the Research Laboratory of Electronics. Auguste, whose family lives in Binghamton, NY, attended a summer program focused on aero-astro engineering, which also included a seminar on nuclear power. “That was the most interesting hour I’d ever spent in my life,” he recalls of the discussion of nuclear physics research, and applications. “I don’t think I blinked once.”

As a result, Auguste is confident that he’ll declare a Course 22 major at the end of his freshman year (which he began at age 16). Karafillis is still considering her options, noting that physics is in the mix, along with nuclear science and engineering. Her interest in nuclear technology came, in part, from seeing a presentation by fellow Winsor School alumna and MIT NSE grad Leslie Dewan, and interning at Transatomic Power, a molten salt reactor startup where Dewan is co-founder and chief science officer.

Grad school is in both students’ future plans, but neither has laid a specific career path. “For now, we’ve got P-sets to do,” quips Auguste, who is also devoting time to a Boston school outreach program, Real Men Read, and to the National Society of Black Engineers.