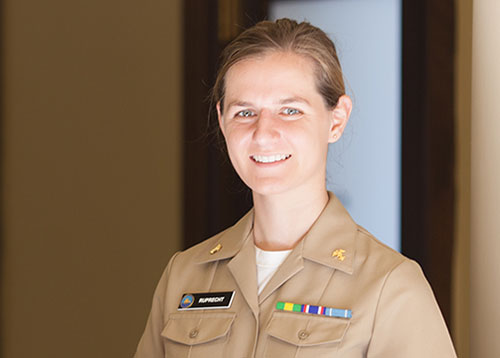 Carolena Ruprecht: On board with nuclear engineering for the Navy

Few undergraduates have pinned down their post-graduation plans as precisely as Carolena Ruprecht. Just after commencement on June 3, 2016, Ruprecht will attend a Reserve Officer Training Corps (ROTC) commissioning ceremony, and then be whisked off to her commission as a surface warfare officer, destined to serve on an aircraft carrier. There, she will lead an elite crew responsible for maintaining and operating the ship’s nuclear-powered systems.

“I have always been driven to do as much as I can with everything I do,” says Ruprecht. “In eighth grade, I began looking into the (U.S. military) academies, and the idea of combining my abilities in math and science with service really appealed to me.”

During high school, her academic interests settled quickly on nuclear engineering: “It seemed like a cool and exciting challenge to produce so much energy from a small amount of material, as if you were unlocking some secret of the universe,” she says.

Ruprecht was decisive about college, too. “My goal was MIT,” she says, because of its engineering strengths. For officer training she chose the Navy, with its “great nuclear program” powering a fleet of ships and submarines. The fact that she’d grown up on the Jersey shore “loving being near water” clinched the decision.

When she arrived in Cambridge in 2012, Ruprecht quickly discovered she would be contending with more than the usual rigors of undergraduate life. “I’ve felt like an ordinary student while in classes, but I have extra responsibilities that probably most other students don’t have,” she says.

While pursuing her degree in nuclear science and engineering, Ruprecht must also drill daily as a Navy midshipman. Like other MIT students, she’ll do homework until midnight or so and then be up at the crack of dawn for physical training. “The hardest part,” she says, is that “no one else has to wake up at 5 am.”

After spending the first few years of her major focused on science and theory, Ruprecht is excited to be plunging into reactor engineering and design courses. She is engaged in an undergraduate research project using the DANTE electrostatic accelerator in MIT’s Vault Laboratory for Nuclear Science (part of the Center for Science and Technology with Accelerators and Radiation), which offers her a much-sought opportunity for hands-on engineering experience.

Under the supervision of Dennis Whyte, NSE department head and director of the Plasma Science and Fusion Center, Ruprecht is building filters for the accelerator’s particle beam. Her project is part of a much larger investigation of applications for the DANTE accelerator, which was originally designed to produce neutrons for cancer therapy studies.

Ruprecht’s filter sits at the front end of a 12-foot-long tube through which a beam of ions is accelerated, with voltage determining the velocity of the ions. Ruprecht’s filter is intended to exclude certain kinds of ions, while admitting others. “The purer the beam, the better the data,” she says. The information Ruprecht collects as she measures cross sections of the beam will eventually be incorporated in her senior thesis.

Although the going has been slow, with the accelerator balking at times, Ruprecht has been thrilled to build the filters, using magnets, soldering iron, wires, and screws, and to install them in the accelerator. “I learned the science and did the calculations in class, but it is so cool to see how things work, or don’t, in real life,” she says.

Her focus now is on practicing what she has learned, and readying herself for a leadership role managing a nuclear reactor on a Navy ship. “I will be making sure it’s running right, delivering power the ship needs, and is safe,” she says. This spring she will learn the name of the ship to which she is assigned. Ruprecht imagines this job will be “challenging,” but she can imagine nothing more gratifying than “being part of the Navy program, on the nuclear side of things.”

She hopes someday to return to school for a master’s degree, and get involved somehow in sustainable energy in civilian life. “I’d love to participate in building a nuclear reactor on time, within budget, and delivering power to lots of people,” she says. But school is not in the cards in the foreseeable future. “It’s hard for me to sit still,” says Ruprecht. “I’m definitely ready to spend time out of the classroom, to go out and start practicing what I’ve learned.”

“I learned the science and did the calculations in class, but it is so cool to see how things work, or don’t, in real life.”